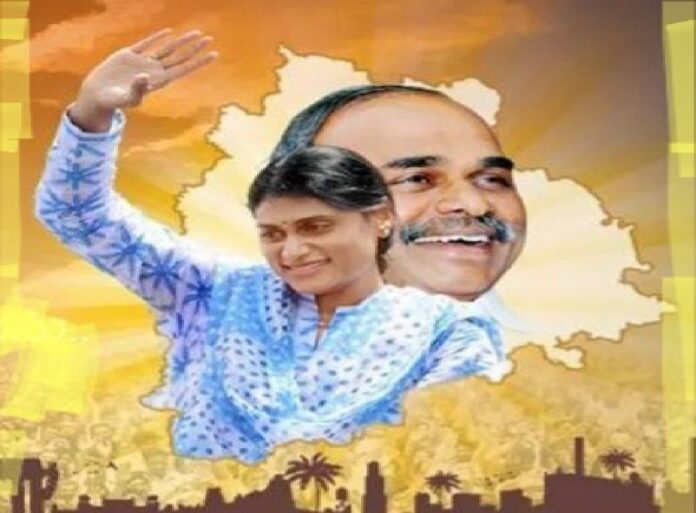 As the political grounds gaining momentum in Telangana with the entry of Sharmila’s party to get launched on July 8, 2021 as scheduled, the equations and strategies are changing to combat the new political entry consequences.

This is the second political venture from ‘House of YSR’ likely to spirit away traditional Reddy vote from Congress, to focus on jobless youth angry with KCR.

The Congress continues to hobble in Telangana with 12 of its 19 MLAs, elected in 2018, now in the Telangana Rashtra Samithi (TRS) camp.

Analysts believed that Sharmila’s entry might further beleaguer the national party by taking away the traditional Reddy vote base — a community devoted to her late father Y.S. Rajasekhara Reddy.

The BJP’s likely gains won’t stop with the split Congress vote. Recent civic poll results showed that the saffron party has mopped up the anti-incumbency votes against the TRS and was ready to shore up that base further.

The Assembly elections in Telangana are not too far away — in 2023.

Meanwhile, preparations are near complete for the launch of Y.S. Sharmila’s party YSR Telangana Party (YSRTP) on 8 July — the birth anniversary of her father YSR.

YSRTP has been registered with the Election Commission in the name of Sharmila’s close aide Vaduga RajaGopal, who told #KhabarLive that the party was registered according to her instructions.

This will be Sharmila’s first foray into electoral politics. She has never contested an election and has always been behind the desk to help her brother Jagan.

But come November, Sharmila will hold a massive walkathon in Telangana to touch base with the state’s voters. A walkathon or padayatra is the family’s signature style of campaigning, and it has immensely helped both her father and brother in elections.

This won’t be Sharmila’s first padayatra, either. When brother Jagan Mohan Reddy was in jail in 2013 for corruption, Sharmila had walked 3,000 kilometres to garner support for the fledgling YSRCP.

Jagan’s blessing
Unfortunately, the Andhra Pradesh chief minister has distanced himself and his party YSRCP from his sister’s debut in neighbouring Telangana.

ALSO READ:  Why KCR's Lucky Charm 'Imam-E-Zamin' Is In Much Demand Nowadays In Hyderabad Stores?

Party leaders clarified there may not be a “personal rift” between the siblings, but there were certainly ideological differences.

For one, Jagan did not wish to be in opposition in Telangana, ruled by his once-close friend K. Chandrashekhar Rao (KCR).

YSRTP insiders revealed that Jagan told Sharmila it was important to maintain cordial relations between the two Telugu states. He wanted to solely focus on Andhra at the moment.

The two chief ministers in the past have bonded over several phone calls, lunches and friendly meetings to discuss issues related to the bifurcation of erstwhile Andhra Pradesh.

The bonhomie may have soured somewhat over the Godavari-Krishna water dispute, but the political message was clear to the sister — stay away from Telangana.

“It is obvious the Congress and BJP are fighting to be number two. BJP is at an advantage in this equation. The party’s plans were always long term. BJP may say they want to dethrone KCR in the next elections, but that is not the case. If it were, the saffron party would have started their groundwork 10 years ago,” Rao said, adding: “If anyone is to gain from Sharmila’s entry, it will be the BJP.”

The BJP’s chances have been further buoyed by its recent victories on KCR’s turf. It was aggressively building on that to unseat the Congress as key opposition, analysts said.

The BJP won the Dubbaka bypoll last November pushing Congress to the third position. In the hotly contested Hyderabad municipal polls — which saw the party’s star campaigners Amit Shah and Yogi Adityanath — the party won 10 times more its tally in 2018. The BJP won 48 of the 150 wards last December, while the Congress managed to hold on to its meagre two.

Though the BJP is not a serious contender to the TRS yet, its aim is definitely to sideline the Congress and become key opposition, a party insider revealed.

Continuous defections from the Congress camp and its internal bickering have made the BJP’s job easier. The Congress has already lost 12 MLAs to the TRS, they wouldn’t want another procession to Sharmila’s party, he said.

Sharmila targets
An analyst said Sharmila’s target vote bank was the Reddy community — a sizable chunk of whom were loyal to her father and late Congress CM Y.S. Rajasekhara Reddy. “The Congress has always been considered a Reddy party,” he said.

Sharmila will also focus on Muslims, Christians and the Scheduled Castes — also Congress supporters in Telangana.

The Christian community would favour her, analysts said, because her husband Brother Anil is a well-known evangelist. Her family, including her late father and brother Jagan Mohan, practises Christianity.

A close aide to Sharmila told #KhabarLive that “It is obvious the Christians will support us. We are counting on the Muslim vote because YSR served that community well. Add to this, the lakhs of unemployed youth who are angry with KCR because of their joblessness.”

YSRTP leader Pitta Ramreddy said the party would also focus on the weaker sections in Telangana who have been ignored by KCR. “The whole point of a separate state was to uplift the backward communities,” he said.

Political analyst Palwai Raghvendra Reddy said Sharmila’s new venture would definitely be a spoilsport to some equation or the other. “It will hurt the Congress more than the TRS or BJP if she gets the Christian and Scheduled Caste votes,” he said. He added the Reddy vote bank could be about 8-9 per cent in the state.

Y.S. Rajasekhara Reddy was popular for many welfare schemes in undivided Andhra — the modified versions of which are still implemented in both states.

Dialling ‘108’ for an ambulance was YSR’s idea. His popularity also soared with the state government’s ‘Arogyasri’ scheme, which enabled the poor to seek treatment in private hospitals.

Sharmila’s challenges
“There really is no vacuum in Telangana politics right now. It does not look the TRS is weaking under KCR though it is certainly not getting any stronger,” Bandaru Srinivas Rao told #KhabarLive.

He added: “A lot of people benefited from YSR’s schemes, a lot of people felt emotionally bereaved when he suddenly died in a helicopter crash. But will voters remember the past and decide to be thankful when polls come? I don’t think so.”

Since she emerged from her brother’s shadow early this year, Sharmila has been clear about her party’s agenda – to revive the YSR support in Telangana, envisioning it as Rajanna Rajyam or YSR’s rule.

Sharmila also has the problem of history. Her father YSR strictly opposed the movement for a separate Telangana state. “If she now tries to portray herself as a messiah of the Telangana people, tries to impose her father’s shadow over the Telangana sentiment, it may not help her gain anything,” a political observer said.

Palwai Raghvendra Reddy endorsed that view, adding, “Though Sharmila will highlight KCR’s anti-incumbency, she might actually help the ruling party by splitting the anti-TRS votes.”

“The Reddys traditionally support the Congress in Telangana. Few may shift loyalties to Sharmila. Again, she may get the votes of those who benefitted from YSR’s schemes. But this will only split the anti-KCR vote. KCR is smart and knows how to handle dissent within and outside party ranks,” Palwai said.

At least two Congress leaders have already jumped ship to Sharmila’s party and they claimed several others — including sitting MLAs from the ruling party — were in touch.

Crowd-puller, campaigner for Jagan, but always in the wings
As a politician, Sharmila has a great connect with the masses. She is also known for her rousing slogans.

During her padayatra in 2012 and 2013, she repeated the line ‘Nenu Jagananna odhilina Baananni’, which meant she was an arrow unleashed by Y.S. Jagan Mohan. This line, which became an instant hit, was used at various public rallies in those months.

During the 2019 elections, she campaigned with the slogan, ‘Bye Bye Babu’ and ‘Bye Bye Pappu’. The first was aimed at former chief minister Chandrababu Naidu and the second was for his son Lokesh.

Perceived to be a ‘carbon copy’ of her dad, Sharmila has been lauded in the past for holding fort in her brother’s absence. She actively campaigned for Jagan Mohan during the Andhra Pradesh Assembly polls in 2019.

But she did not contest the elections nor did she take up a crucial party post. Sharmila slid into the shadows after the results and emerged only this February to hold a meeting on her property in Hyderabad. It is right next to her brother’s YSRCP office.

Somebody in the know also confided that Sharmila did not attend the annual family reunion on Christmas last year. #KhabarLive #hydnews