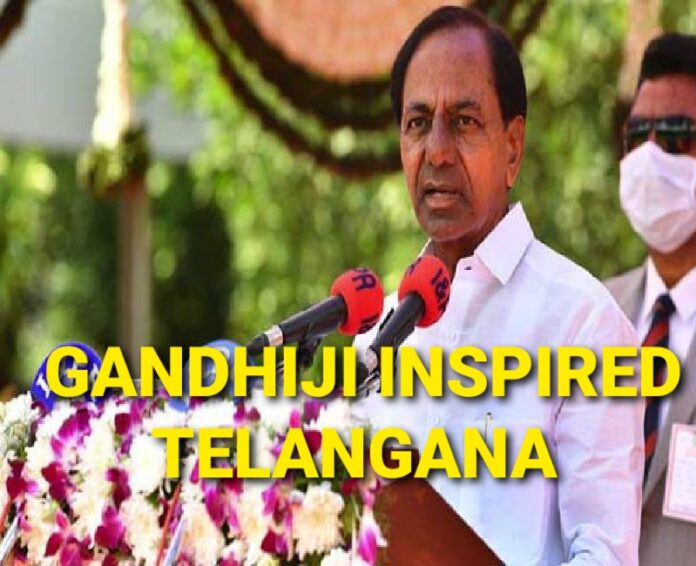 The Telangana Chief Minister K Chandrasekhar Rao has said the Indian freedom movement under the leadership of Mahatma Gandhi attracted the attention of the world for achieving independence from British rule through the unique means of non-violence.

The Telangana movement too drew its inspiration from the path shown by Mahatma Gandhi and achieved the long-cherished dream of separate Telangana State, he said inaugurating the ‘Azadi Ka Amrut  Mahotsav’ celebrations at the Public Gardens here on Friday as part of nationwide celebrations to mark the completion of 75 years of Independence.

Chandrasekhar Rao launched the 75-week celebrations which will be continued till August 15, 2022, by hoisting the National Flag and accepting the guard of honour from the police and later releasing the tri-colour balloons.

ALSO READ:  How To Ensure Your Remote #WFH Staff Is Productive In COVID-19 Scenario?

Emphasising that every citizen should cherish the freedom, rights and responsibilities achieved as the result of great struggle, Chandrasekhar Rao said “Our independence was the culmination of several historic events, sacrifices and countless people laying down their lives. Celebration of ‘Azadi ka Amrut Mahotsav’ will inspire present generations and educate them about the immense struggle it took to achieve freedom,” he said.

He called upon ministers, MLAs, MLCs and other people’s representatives irrespective of political party affiliations and people from the village to the State level to participate in the 75 week-long celebrations and take pride in the patriotic spirit and relevance of Independence. He thanked Governor Tamilisai Soundararajan who launched the celebration at another historical city of Warangal at the same time.

Indian freedom struggle was a historical movement and the leadership of Mahatma Gandhi defined the Indian freedom movement as before and after Mahatma, KCR noted. There were freedom struggles before Mahatma Gandhi entered the scene but after he had taken the lead, it made a great difference to the Indian nationalist movement because of his non-violence and satyagraha that became the core principles to spread the movement. “Many had doubts whether Mahatma’s chosen path would attain independence but it ultimately inspired the world, many world leaders like Martin Luther King and taught a new lesson to the world,” he said.

Giving a perspective of the Dandi salt march, KCR said the then British Viceroy Lord Irwin who made light of Mahatma’s Dandi march in 1930 and civil disobedience movement against the imposition of the salt tax. When Mahatma Gandhi launched his Dandi march on March 12, 91 years ago from Ahmadabad to Dandi accompanied by 79 persons, it had witnessed a historic chapter unfolding in the freedom movement when about 70,000 people gathered at Sabarmati, KCR recalled. The government of India in commemoration of that great event chose today to launch ‘Azadi Ka Amrut Mahotsav’ to be observed across the country for 75 weeks.

He said the State government had appointed a committee led by Government Advisor Dr K V Ramana Chari and allotted Rs.25 cr for organising various inspiring cultural, literary events and competitions for the benefit of the present generation and inculcate a spirit of patriotism and value of independence.