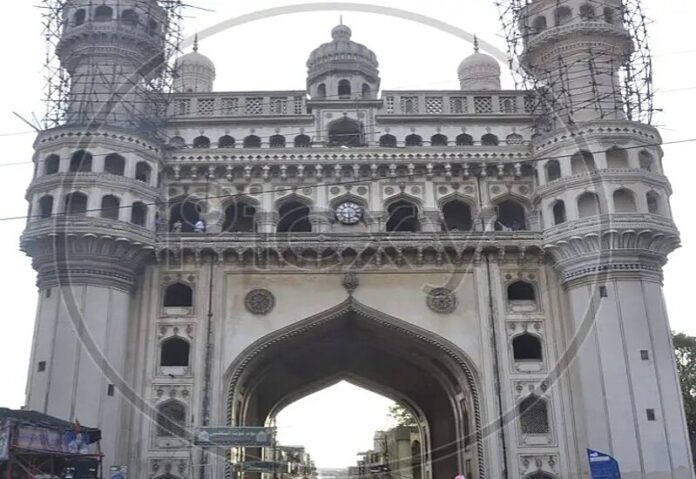 Despite several warnings raised by ASI that seepage from the storm water drain could severely damage Hyderabad’s iconic structure and negligence  and govt apathy.

The 430-year-old Charminar monument in Hyderabad is in crisis with full of cracks and has been a cause of concern. On the other hand, the Charminar has undergone repairs for six months but it was not completed while tourists want to preserve the oldest structure.

Hyderabad’s Charminar, a historic monument that has weathered the elements for 425 years, now faces a unique existential threat: underground pipelines in its proximity. The Archaeological Survey of India (ASI) has raised an alarm over pipeline work being carried out just 20 metres from the iconic structure.

Superintending Archaeologist Milan Kumar Chauley has made a representation to the Greater Hyderabad Municipal Corporation Commissioner about the long-term harm the ongoing work is likely to cause.

“The pipeline work can be very dangerous for the building. Earlier, it was 1 ft in diameter. Now the civic body has dug up to a depth of 6-7 ft to lay two 3-ft diameter pipelines about 20 metres from the building. The pipelines are bound to leak and cause long-term harm to the Charminar,” Mr. Chauley said.

“The monument is a limestone mortar structure, and water seepage below the ground will result in capillary action rendering the mortar brittle, and make it unstable over a period of time,” said Mr. Chauley, who has cited the Ancient Monuments Archaeological Sites and Remains Act (AMASR) in his representation.

The pipeline work is part of the much-delayed Charminar Pedestrianisation Project. “We are laying two 0.9 metre pipelines, one for storm water, and another for civic utilities, such as fibre optic cables. Nearly 80% of work is done, we will complete the rest by the end of this month,” said a Greater Hyderabad Municipal Corporation (GHMC) official.

This is not the first time the ASI has raised concerns over work in close proximity to the Charminar. “I have sent a number of letters to our head office. The GHMC is using pneumatic drills to remove the older road layer, and the vibrations are a cause of concern. They also used earthmovers to dig deep trenches and lay pipelines nearby. But there has been no response,” said Gopal Rao, an ASI officer at the Charminar site.

In January, the Centre amended the AMASR to allow infrastructure projects within a 100-metre radius of a protected monument. “I have visited the site many times. I wanted the pedestrianisation work to take place. But the heavy-handed way they are doing it is alarming. I have informed the Delhi office of the Indian National Trust for Cultural Heritage (Intach). They will take up the issue,” said Anuradha Reddy, convener of Intach in Hyderabad.

Charminar was built in 1591 by Quli Qutub Shah 430 years back and is still solid due to the presence of stone structures inside. However, thousands of vehicles roaming very close to the Charminar caused the building to weaken. Smoke and irritating dust particles from the vehicles damaged the Charminar building.

Toxins, nitrogen dioxide and dust particles all form a coating on the building walls. However, the Charminar was built with a mixture of lime, cucumber powder, jaggery, rock powder and egg yolk. The main building is made of stone but the mixture is laid thickly on top of it. These do not absorb moisture. But visitors have engraved names deeply on the walls of the Charminar. Experts found that the masonry was weakened as a result.

However, the government, which also has a responsibility to protect the Charminar, wants immediate funding and a complete overhaul. The officials said that by examining the most ancient monuments, the future generation will know its glory.

The governments have a responsibility to preserve historic sites. Charminar in particular was built by Quli Qutub Shahi to commemorate the plague. It is the responsibility of the government to provide more funding for the Charminar, which is still growing and to showcase the Charminar glory to future generations. People also need to protect the monuments to preserve them for future generations. #KhabarLive #hydnews