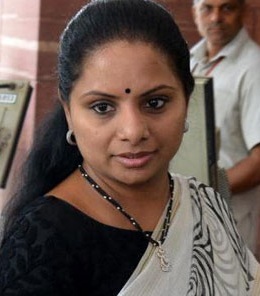 The key position grabbing is the age-old practice of ruling powerful politicians. Telangana Rashtra Samithi MLC and chief minister K Chandrasekhar Rao’s daughter Kalvakuntla Kavitha is learnt to be trying to capture the Hyderabad Cricket Association, elections for which are likely to be held shortly.

The HCA has been mired in a number of controversies ever since former Indian cricket captain Mohammad Azharuddin became its president.

The infighting in the HCA has finally led to the sacking of Azharuddin. There have been reports that Kavitha had been indirectly controlling the members of the HCA for quite some time.

Very recently, she commented on the state affairs in the HCA, saying she was not happy with the developments in the association.

She indirectly pointed out to the allegations that Azharuddin was neglecting the promotion of cricket in Hyderabad and encouraging only his cronies.

Now that the apex council of the association resolved to remove Azhar from the seat, decks are cleared for the election of Kavitha as the HCA president. If she enters the race, there might not be much contest against her.

Azharuddin said that he had no objection if Kavitha contested the elections and won the post.

“Anybody can contest the elections and try to win the posts. There is nothing wrong in it,” he said. #KhabarLive #hydnews