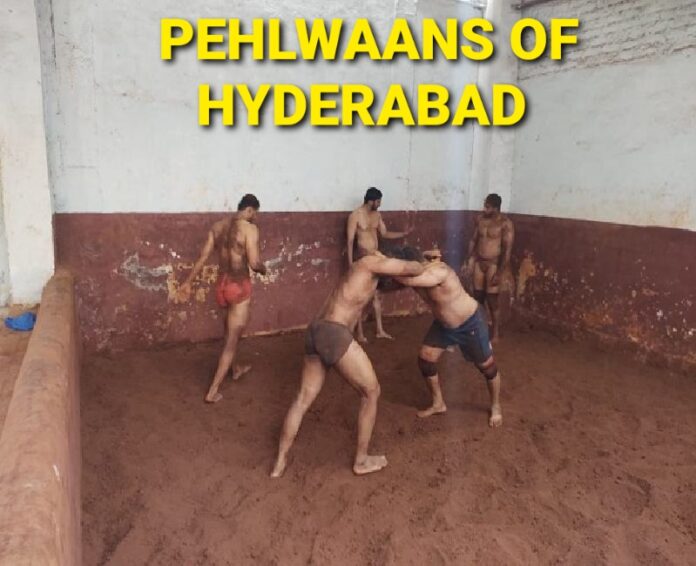 The mud-wrestling pehlwaans are becoming extinct in Hyderabad due to non-avaliblity of facilities,  food, atmosphere and encouragement.

There are regular competitions held in the city in venues like Barkas Ground and LB Stadium, where titles are given to winners in mud wrestling events. 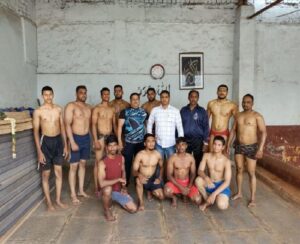 Narsing, a 20-year-old, starts his day at around 5 am by going to the akhada in the Pool Bagh area, near Chandrayangutta in the Old City of Hyderabad. This is where Taleem, the traditional way of body-building, is practised. Once he reaches, he joins a group of people who do squats, body weights, rope climbing, and ploughing the mud among other exercises as they prepare themselves for mud wrestling, known as ‘Kusti’.

“Kusti is a traditional sport in our family, so I have also started learning it for the last two years. While going to the gym only helps pump up our body, here at the akhada, we gain strength over time along with building muscles, so I like it here,” says Narsing.

Narsing is one of the 70 men in this particular akhada, and this is one of the few places in the city which gives free coaching to aspiring pehelwans. And there are thousands of pehelwans in the city from both the Hindu and Muslim communities, who love the sport and are familiar with the health benefits associated with it.

ALSO READ:  Making A Future With Quest Experiences In Studies 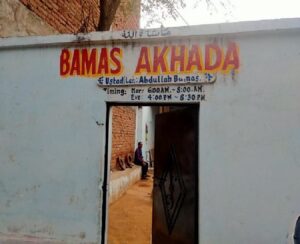 Kushti is still practised in the city
“Our uncle, late Abdullah Bin Mohammad Bamas started this institute in 1999, and we went on to continue his legacy with the aim of providing free coaching to people who are interested in learning mud wrestling,” says Khalid Bamas, who is now running the Bamas Akhada. He’s also a recipient of the Andhra Kesari title at the state level mud wrestling competition.

The Bamas family pays all the bills for the akhada and also maintains the mud and other facilities.

“There is no support from the government, neither for the institutes nor for the wrestlers who have already won titles. However, in north India, there are some states like Punjab, Haryana, Uttar Pradesh and Mizoram which offer government jobs to people who win titles. But for us, there are no such benefits,” says Khalid Bamas.

There are several such institutes across the city. While some charge a fee to teach, some others do so for free. But, there is no support from the government to take the sport forward. 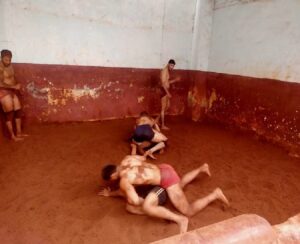 However, this was not the case always. Historians say that in the age of the Nizams, there was recognition for mud wrestlers. “There were a lot of people who were interested in watching this sport back then, when there were competitions. And pehelwans who used to win titles for the Hyderabad state, would be given jobs,” says Mohammad Safiullah, a historian.

There are regular competitions held in the city in venues like Barkas Ground and LB Stadium, where titles are given to winners in mud wrestling events. The spectators are mostly locals.

Mohammad Abdul Sultan, who was the Telangana state champion in 2017, is now preparing for the national level wrestling competition. He dedicates about six to eight hours of each day to his practice. “Regular practice and diet are necessary to be fit for the sport. I’m preparing for the national level competition, and wish there was some sort of financial support from the government, but there is nothing,” says Abdul. 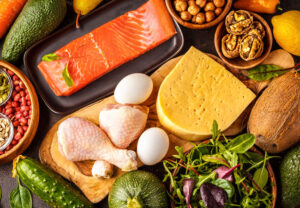 Diet and dedication
The people practising the sport follow a special diet; they are strictly advised to avoid any kind of artificial supplements.

The practitioners start their morning with badam thandai, a traditional drink made with badam, elachi, saunf and water. They are required to eat meals rich in meat, vegetables and dairy products, especially ghee and milk. They also consume dry fruits.

Wrestlers as young as 12 can be seen practising the sport and doing exercises appropriate for their age. However, the sport has remained a male bastion in Hyderabad.

While practising, the wrestlers run the risk of fracturing a bone if they are not careful, says Essa Bamas Doos, who has been practising wrestling for the last 40 years. He has also been training people for the last five years after he returned from Dubai.

“There are chances of people getting their wrist and ankle fractured, so it’s necessary to supervise and teach them techniques which will help them fight without getting hurt,” adds Essa.

While many join due to a family background in kusti, there are also several people who sign up for the sport out of their own interest. “Irrespective of one’s family background, one can always master the skill with their dedication and determination. All they need is will power and patience,” says Awad Mohammad, a veteran mud wrestler.

And the first thing that they are taught while learning the sport is to be humble. “Even if someone tries to put up a fight with you, you should be patient enough to divert him and not get motivated to fight and use your pehlwani skills to defeat him,” says Awad.

Awad adds that if any of the pehelwans deviate from this or indulge in any illegal activity, he can never be called as a pehelwan. “A true pehelwan should always use his skill only for the good, and he should seek to develop the sport and win titles,” he says. #KhabarLive #hydnews