The mockery of the covid protocol seen in Hyderabad markets, roads, marriages, functions, funerals, rallies and restaurants. Nobody cares to maintain social distancing or wearing the mask. And no control or strict vigil by state government. 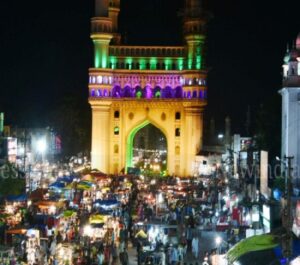 Locals and police point out that the crowd turning out is not even one-tenth of the usual. Vendors also note their necessity to earn. But this has meant laxity in Covid-apt behaviour.

In the month-long Eid markets in Hyderabad’s older parts, hundreds are gathering for festival shopping, violating the Covid-19 protocols with no physical distancing and masks.

During the ongoing holy month of Ramzan, it seems like these parts, which host the iconic Charminar and the Mecca Masjid, are carrying on with their activities under little restriction. On Friday, as #KhabarLive visited the old city, from the smallest of vendors to big traders, the flea markets were up and running as usual.

On an average Ramzan day in Hyderabad, when the markets bustle with activity, the huge streets in and around Charminar are reserved exclusively for pedestrians. Thousands come out — most of them for shopping, some for prayers in the masjid, and others for iftar activities, etc.

This year, however, the state government has imposed a night curfew from 9 pm to 5 am.

Last year, the markets were shut and the area wore a deserted look due to a lockdown in the state.

But with fewer restrictions during the day now, a large number of shoppers have been gathering at the markets over the past month and the numbers are only rising with each passing day.

However, the locals and the police point out that the crowd turning out is not even one-tenth of the usual. Vendors also note their necessity to earn in this lucrative period.

Even so, the situation is worrying as the country is battling with the raging second wave of the Covid-19 pandemic. On Friday, Greater Hyderabad Municipal limits, which includes Hyderabad and surrounding areas, reported 5,559 Covid cases and 41 deaths. 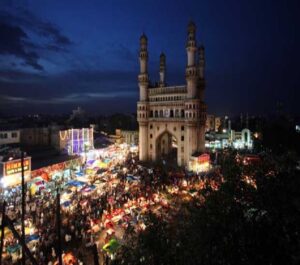 Speaking to #KhabarLive about following protocol, Shamsher Ali, a street vendor, blamed people for lack of Covid-appropriate behaviour. He also said that the city is less affected than other parts of the country.

“But anyway, the cases in our state are lesser than other states. The situation is under control. Our chief minister and police also say the same — we have less cases here,” added Ali.

For the nearly 300 vendors, especially the ones on the street, staying at home is not much of an option. Their income in the month of Ramzan is at least 40 per cent more than what they make the rest of the year, they say.

“I have five people to feed. I make at least 10 times more in these 30-40 days than the rest of the year. You tell me, can I stay at home and not run my stall? My income is from this street shop and nothing else. How can I stay back, from where will I earn?” said another vendor Rizwan Khan.

Asked if he didn’t fear contracting the virus, he said: “If I don’t earn my family will die of hunger. You tell me what to do? I am wearing a mask, doing my duty, rest god (Allah) will take care.”

Most vendors who rely on daily income from the sales recollect the harrowing period of income loss during the lockdown last year when all of these markets were completely shut.

According to the vendors, there was hesitance among people in the initial days this year but the crowd eventually picked up.

For the women, who form the majority of visitors to these markets, the Eid shopping is the only time of the year they look forward to and are “allowed” to step out of their homes to shop.

“My husband works as a construction labourer. I have four daughters. Not always do we get out like this and shop. Only at this time when my husband is free to accompany us, we step out and shop. This happens once a year. We did not shop last year due to lockdown,” said a Muslim woman who didn’t wish to be identified.

Adjusting her hijab, she immediately told #KhabarLive that she is not comfortable with a camera.

The city police has been facing criticism for not doing enough to control the crowd. Speaking to #KhabarLive on this, Hyderabad City Police Commissioner Anjani Kumar said cases have been filed against those found to be violating norms.

“This is not even 1/10th of the usual crowd (if compared to the pre-2020 period). There are violations and we’re booking cases, but in smaller by lanes even less number of people look like a crowd,” he said. 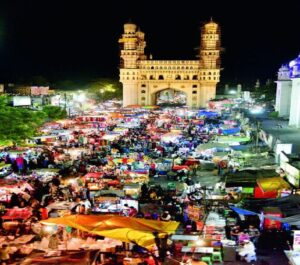 “People of the old city are very much in support of the regulations we are imposing. If you compare videos from two-three years ago of the crowd, you will see how much in compliance the people are,” said Kumar.

ALSO READ:  A Tribal Woman 'Forced To Give Birth' On A 'Village Road' In Andhra Pradesh

“We’ve booked cases on people who violated rules. The community elders are on our side — the clerics have given the call that there is no need of coming to the masjid to avoid big gatherings,” he added.

According to Kumar, a lot of fake videos were circulated on social media to spread misinformation about the crowd in the old city. The police had four cases registered and two people arrested for circulating these misleading images, he said.

Recently, Telangana Chief Minister K. Chandrasekhar Rao reiterated that the state will not be locked down. He also claimed that the Covid situation in the state is under control. This came amid criticism that the state government may be fudging the data in its daily bulletins.

The state also saw a huge spike in the month of April amid the political campaigns of the leaders, especially from the ruling Telangana Rashtra Samithi and the Bharatiya Janata Party (BJP), for the by-elections. There was a 1,400 per cent rise in Covid cases from mid-March to April.

Last month, the Telangana High Court also lashed out at the state government for not imposing restrictions when needed and asked the government to take a decision on the lockdown. But, the CM insisted that Telangana didn’t need a lockdown. #KhabarLive #hydnews