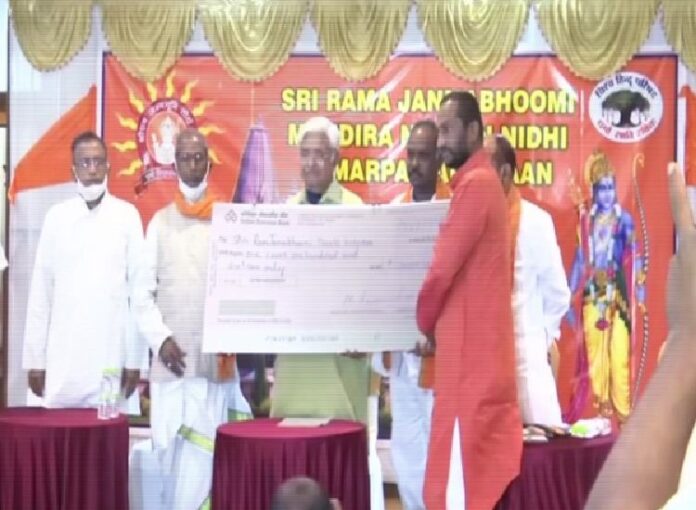 After a lull following the Greater Hyderabad Municipal Corporation elections, political sparring between the TRS and BJP in Telangana have intensified for the Ram Mandir fund donation, aka Sri Ram Janmabhoomi Nidhi Samarpan Abhiyan.

Wary of the BJP’s threat to mobilise voters, a couple of TRS MLAs attempted to “expose” the national party’s Hindutva politics in the state. While the TRS party officially remained silent on the issue, a few ruling party legislators accused the BJP of using the fund raising drive to create communal tensions in the state.

The fund donation in the state was kicked off on January 20 by the Shri Ram Janmabhoomi Teerth Kshetra Trust, in which the Vishva Hindu Parishad (VHP), Rashtriya Swayamsevak Sangh (RSS), BJP and other affiliates participated. Asking everyone to contribute for the construction of the temple in Ayodhya, BJP Telangana chief Sanjay had said, “The fundraising drive is being organised not just to collect money but also to involve all people in the holy cause.”

In response to the campaign, Korutla MLA Vidyasagar Rao of the TRS accused the BJP of playing “political tricks” through the fundraising campaign. He alleged that under the garb of fundraising the BJP was communalising the state. The MLA went on to say that there was no need to give money for the Ram Mandir and instead appealed to devotees to construct temples in their own village. “Whoever asks for money, tell them that you’ll construct a Ram temple in your own village. Will you go to Uttar Pradesh to see the Ram Mandir there?” Vidyasagar had reasoned.

The BJP, however, promptly countered the ruling TRS. Accusing the legislator and his party of being ‘anti-Hindu’, Bandi Sanjay called for a state-wide protest on January 21 in which many of the BJP members and the Sangh affiliates like the Bajrang Dal participated by burning effigies of Vidyasagar Rao in Jagtial and other places.

Fearing a strong backlash from the BJP, the MLA made a quick retreat claiming that the national party was misquoting him. “I am a hardcore Hindu. I will visit the Ram temple site and donate money for its construction. It is appalling that the saffron party leaders are using the name of Hindu gods for political gain. I was only trying to expose this,” Vidyasagar said.

However, despite the backlash, another TRS MLA from Parkal, Challa Dharma Reddy on January 28 reiterated the comments made by his colleague, Vidyasagar Rao. Reddy’s comments triggered violence with BJP supporters breaching the police security and attacking his residence with stones.

Political observers say that although the TRS acknowledges the threat of the BJP gaining a foothold in the state using the Ram Mandir issue, they are unable to directly confront the national party. Speaking to #KhabarLive, Laxminarayana, a political analyst based in Telangana, said, “The TRS cannot directly confront the BJP, which is a national party. The BJP also has the support of several Hindu outfits like RSS, Hindu Maha Sabha etc, so it is only wise for the party to remain silent.”

The ruling party’s conspicuous silence on the Ram Mandir fund donation is despite BJP state president Bandi Sanjay asking TRS leader and Chief Minister K Chandrasekhar Rao to make his stand clear is testimony to this. When accused of being ‘anti Hindu’ by the BJP, the TRS’ response was that under their regime they are renovating the Yadadri temple and their party chief is a devout Hindu, citing KCR’s various visits to temples.

The accusation that the TRS being anti-Hindu emerged during the Parliament elections too.

Responding to the accusation by Prime Minister Narendra Modi, KCR had said, “I am a bigger Hindu than many other Bharatiya Janata Party leaders. The BJP leaders talk of Hindutva only for the sake of vote bank politics, but I practise Hinduism in letter and spirit in all walks of my life.”

Vinod Kumar, former TRS MP told #KhabarLive, “We have not had any discussion regarding Ram Mandir till now.” He said that the party will respond to the BJP when required.

Laxminarayana noted that the entire Ram Mandir movement led by the BJP was a political campaign which paid rich dividends to the party. He said, “Using the temple campaign, they have won in several states, now in non-BJP states like West Bengal and Telangana they want to deploy the same strategy under the garb of Ram Mandir donation.”

However, Laxminarayana said that only time will tell if the people of Telangana buy the BJP’s narrative on Ram Mandir or choose to go with KCR, who claims to be a bigger Hindu. #KhabarLive #hydnews