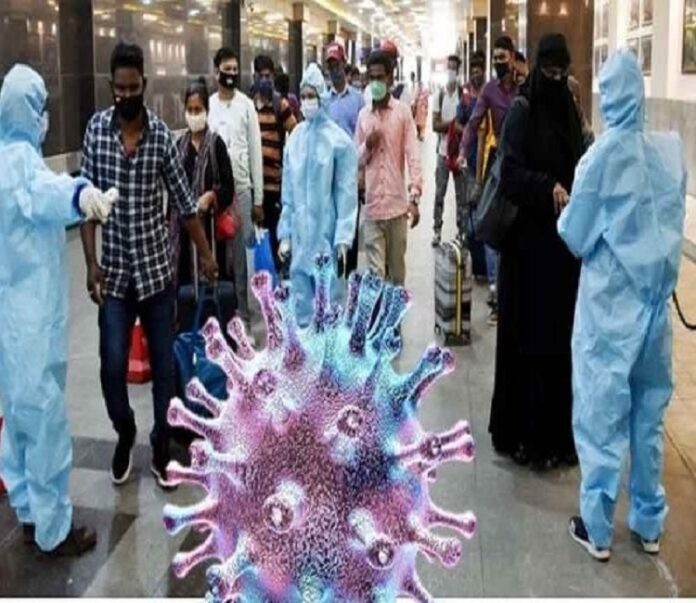 As experts warn of a potential third Covid wave, many Telanganaiets are worried about their next paycheck. Small businesses and informal workers fear another lockdown could spell an end to their livelihoods.

As a delayed monsoon finally reaches Telangana, shopkeepers at a local market duck under covers and frantically attempt to keep their merchandise from getting wet.

They say they cannot afford any further blow to their small business following more than a year of erratic income due to the coronavirus pandemic. Now there is fear of another crippling COVID-induced lockdown.
“This government cannot survive another lockdown,” Kiran Kumar tells #KhabarLive. “They will get voted out if further restrictions are imposed on us.”

Kumar runs a small shop in Hyderabad’s upscale Charminar Market. His tiny shop, a 3-foot-by-3-foot (.28 square meters) hole in a wall filled with clothes, is still able to feed his family of five.

But as experts warn of a potential third COVID wave in the coming months, India’s flagging economy — especially the micro, medium and small scale enterprise (MSME) sector — could face devastating repercussions from another lockdown.

Of the 63.4 million units that make up India’s MSME sector, 99.4% are micro-enterprises, government data shows.

Located about 15 meters from Kumar’s store is the Faqir Chand bookstore. Abhinav’s family has been running the shop for four generations. The bookstore has seen numerous periods of severe political instability, economic downturns, and most recently, second wave of the coronavirus.

Shops closed down nationwide and offices resumed home office.
“The store was closed for nearly three months,” Abhinav tells #KhabarLive. The family left for their hometown in a nearby state.

“We were among the luckier ones,” he says. But for many people like Kumar, shutting shop even for a few days has serious repercussions, and working from home was not an option.

In the midst of the second wave, the government released data that indicated that Telangana’s gross domestic product (GDP) grew at 1.6% in the January-March quarter of the 2020-21 fiscal year, just as coronavirus infections were rising. A contraction of 7.3% was reported for the entire fiscal year.

But some economists slammed the data as vastly exclusionary.
“Our GDP data just doesn’t take the unorganized sector into account. It is entirely based on the organized sector, and largely the corporate sector data,” Indian economist Arun Kumar told #KhabarLive.

Kumar recently authored a book about the economic impact of the pandemic, titled Indian Economy’s Greatest Crisis: Impact of Coronavirus and the Road Ahead.

ALSO READ:  'Lokpal' Will Be A Reality Soon, After Four Years On Power, Modi Govt Set To Give 'Green Signal' To Bill

“If the unorganized sector and the destruction of agriculture are taken into account, the economy contracted by 29%,” Kumar added.

Most Indians typically purchase daily necessities from a local store close to their homes. But during COVID, many have turned to online shopping, much to the dismay of small neighborhood stores.

As India continues to record about 40,000 new infections daily, medical experts have warned of an impending third wave that could jeopardize efforts to bring the economy back on track.

“When the cases started to spike in February, we knew another wave was coming but our expertise was disregarded,” Dr. Rajan Sharma, former president of the Indian Medical Association, told #KhabarLive. “No one was prepared for what followed.”

The pandemic moves in ebbs and flows, and no expert can give a date when a third wave will start nor its intensity, Sharma explained.

Vaccinating a large part of the population is crucial in preventing a significant rise in infections, he added.

More than six months after India began the world’s largest vaccination drive, only 7% of the country’s population has been fully vaccinated.
“Vaccinating a population as vast as ours is a monumental task,” he says. “In addition to acquiring the number of shots required, people also need to trust medical advice.”

According to Sharma, doctors also need to be stakeholders in policy formulation to successfully manage future waves.

“The country needs an ‘Indian Medical Service’ just like it has the ‘Indian Administrative Service’ or ‘Indian Revenue Service.'”

India faces the dual challenge of ramping up vaccinations in the interiors of the country and reviving its flailing economy.

The government needs to cater to the micro sector by providing help in the form of marketing, finance, technology, Kumar said.

“The economy is suffering from a lack of demand. If the people don’t have the purchasing power, the economy cannot recover,” Kumar said, adding India should boost rural employment guarantee schemes and launch similar schemes in urban areas for the unemployed.

But for now, the small shop owners at MJ Market do not have the luxury to think about the state of country’s economy. For now, Ashish Kumar needs to protect his merchandise from the rain and buy rice to feed his family. #KhabarLive #hydnews