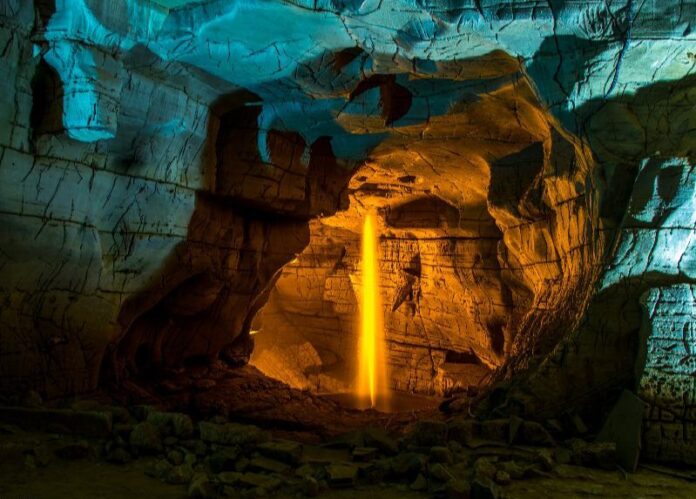 The second largest cave system in India hides beautiful stalactite and stalagmite formations in AndhraPradesh, underground fountains and more to be found in #KhabarLive expedition. 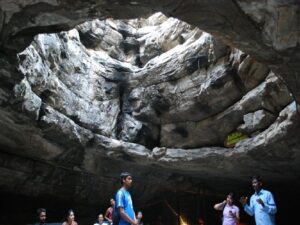 It was twilight when we reached the legendary Belum Caves, located amidst flat agricultural land, in Kurnool district of Andhra Pradesh. Also known as Belum Guhalu, it is the second-largest network of underground caves in the Indian subcontinent, the longest being in Meghalaya (the 22 km-Krem Liat Prah). Little did we realise that this cave system, embedded deep in the ground, was nothing short of an underground city with a distinctive character of its own. From a well-like entrance, we descended the steps leading into the caves, to explore the surreal underground world of stalactite and stalagmite formations, long passages, spacious chambers, freshwater galleries and siphons.

The Belum Caves came to be known when British surveyor Robert Bruce Foote stumbled upon them caves in 1884. Even after Foote’s discovery, these caves were used as garbage dumps till 1983, when a team headed by German speleologist Herbert Gebauer along with Indian geologists undertook detailed explorations and mapping. It was then that the remnants of clay vessels dating back to 4500 BC were recovered here, along with mortars and pestles used for grinding Ayurvedic medicines, suggesting the antiquity of the caves. 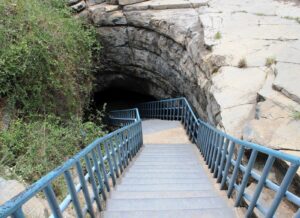 It is believed that this intriguing network of caves was formed where an underground river washed away the soft limestone from the surrounding hard stones. The walls of the caves have deep marks from erosion caused by the river. If you observe closely, you can see deposits of quartz within the caves.

The tranquillity inside was unbroken, except for the mild splash of water in certain passages. Though almost 3.5 km of the caves has been successfully explored, only half of the site is open to tourists at present. As we delved deeper, sunlight gradually withdrew, with the soft gleam of sodium vapour lamps taking over. We were awed by the strategically placed lighting and the well-lit and neatly maintained passages. We marvelled at the sight of the bizarre formations, lit up in the golden hue emitted by the lamps. The stalactites hang from the ceiling of the caves like icicles, while the stalagmites form myriad shapes on the floors. Walking through the vast subterranean passages, it felt like we had been transported to a Discovery Channel show! 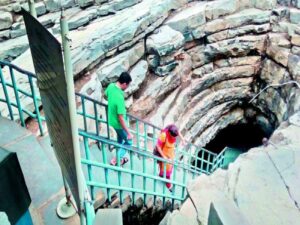 A little further down, we found ourselves in a huge hall with an artificial fountain. As we manoeuvred our way through the rocky terrain, especially a couple of narrow passages, we felt a lurking sense of danger. There is an eerie silence here and even the faintest whispers echo a thousand times before receding in deep nooks and corners. After escorting us through a maze of passages, our guide led us through Simhadwaram – so named because of the natural arch-like formation of the stalactites that resembled the head of a lion– into a narrow passage.

It led us to Kotilingalu, so called because of the thousands of stalagmite and stalactite formations akin to a Shiva lingam crowding the large chamber, giving it an almost surreal look. We came across a formation which resembled a massive banyan tree with its rocky, aerial roots spread all over. Yet another looked like a thousand hooded cobras. 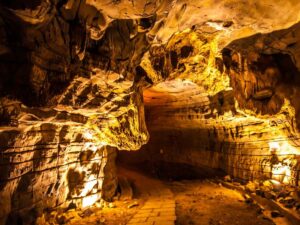 Proceeding further, a naturally-formed structure called the ‘Saint’s Bed’ or ‘Greystone Recliner’ grabbed our attention. It suggests that Buddhist monks meditated in the labyrinth of these caves centuries ago. The area where these relics were found has been converted into a Dhyana Mandir (Meditation Hall). There have been discoveries of many Buddhist relics here, along with remnants of vessels, which are now housed in the archaeological museum in Ananthapur, Andhra Pradesh. 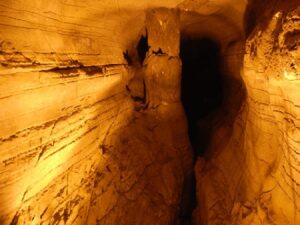 The most interesting part of the caves are the Saptasvarala Guha, the chamber of seven notes, where if the stalactites are struck with a wooden stick or your knuckles, musical notes are produced.

From here, we descended to Patalalinga, the deepest point of this subterranean city at 150 ft from the entrance, where we could spot a huge Shiva lingam formed from a stalagmite. The place has a perennial underground stream with a natural waterfall. It starts at one point and vanishes mysteriously at another point, deep inside of the earth. Legend has it that it resurfaces in a well in Belum village, about 1.5 km away, which is the only source of drinking water for the villagers. 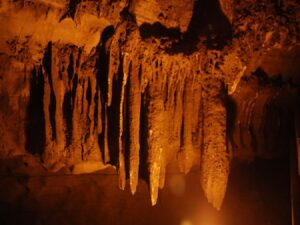 In 1988, the Andhra Pradesh government declared Belum Caves and the surrounding area as protected, and banned all construction in the precincts of the cave system. Subsequently, in 2002, Andhra Pradesh Tourism Development Corporations developed the caves as a tourist attraction. Today, this is a zero-litter zone; it is well lit and has blowers to circulate oxygen within the deeper sections of the caves.

TIPS: It can get very hot inside the caves. Hence avoid going there in summer. The caves are open seven days a week between 10 am and 6 pm but issuing tickets stops at 5 pm. Remember to carry drinking water. Visitors are not allowed to enter the caves on their own. Guides are available to take visitors inside the caves. #KhabarLive #hydnews