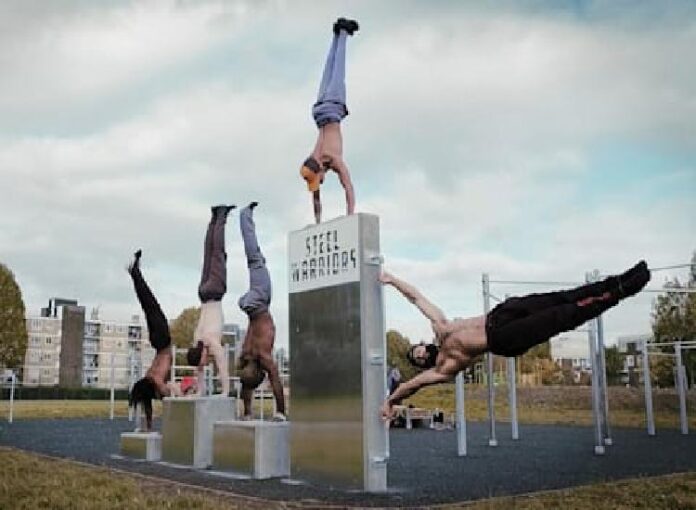 Want to perform strength moves that defy gravity? We’ve got a workout for that. Even if you’re not quite sure what calisthenics is, you’ll have definitely seen it in action. 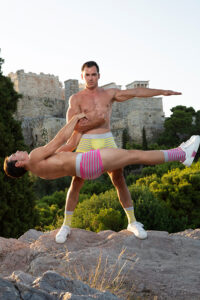 Calisthenics or Callisthenics is a form of strength training consisting of a variety of movements that exercise large muscle groups, such as running, standing, grasping, pushing, etc. These exercises are often performed rhythmically and with minimal equipment, as bodyweight exercises.

Project Calisthenics is a modular program designed for all fitness levels and abilities.

Most movements can be done with no equipment, however a resistance band is highly recommended.

The only weight you need is your own bodyweight! 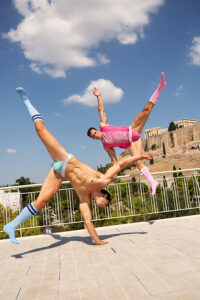 Whether you’re an absolute beginner, or a more experienced athlete, this program will challenge you in new ways.

They are intended to increase strength, fitness, and flexibility, through movements such as pulling, pushing, bending, jumping, or swinging, using one’s body weight for resistance. Calisthenics can provide the benefits of muscular and aerobic conditioning, in addition to improving psychomotor skills such as balance, agility, and coordination.

Urban calisthenics is a form of street workout; calisthenics groups perform exercise routines in urban areas. Individuals and groups train to perform advanced calisthenics skills such as muscle-ups, levers, and various freestyle moves such as spins and flips.

Sports teams and military units often perform leader-directed group calisthenics as a form of synchronized physical training (often including a customized “call and response” routine) to increase group cohesion and discipline. Calisthenics is also popular as a component of physical education in primary and secondary schools over much of the globe.

In addition to general fitness, calisthenic exercises are often used as baseline physical evaluations for military organizations around the world. 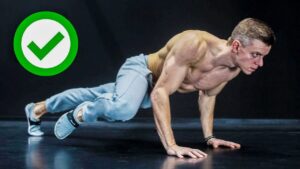 Most people discover calisthenics by seeing someone doing an advanced version of it. For many of its current practitioners, the man they saw was probably Hannibal Lanham, also known as Hannibal for King, whose version of calisthenics, which he practised in parks around Queens, New York, brought the discipline to the attention of millions.

The study, ‘The effects of a calisthenics training intervention on posture, strength and body composition’, by scientists from the Sport and Exercise Sciences research unit at the University of Palermo, Italy, found that calisthenics training is a “effective training solution to improve posture, strength and body composition without the use of any major training equipment”.

The study took 28 men and divided them into two groups. One group practised calisthenics for eight weeks, while the other group continued with their normal workout routines. After eight weeks all of the participants underwent a body composition analysis, a postural assessment, a handgrip test and a press-up and pull-up test.

The researchers discovered that the men who trained calisthenics had improved their posture and lowered their fat mass, while the number of press-ups and pull-ups they were able to do had increased, even though their calisthenics training didn’t include these specific exercises. In contrast, the group who continued with their normal training routines didn’t really improve on what they could do before they eight weeks had begun.

You wouldn’t expect to walk into a gym for the first time and immediately start benching 100kg; it’s the exact same with calisthenics, so leave the muscle-ups to more experienced practitioners, for now. 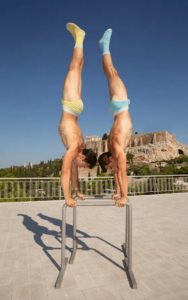 You need to start with basic exercises, and with calisthenics the most basic, but also one of the most important moves is the humble press-up, but even the press-up can be broken down into beginner and advanced versions. If you’re not able to do a press-up, then expert advises you begin by doing an incline press-up. To do that put your hands on a bench, or anything that’s a similar height and can hold your bodyweight, and with your feet on the ground just work on going through the press-up movement and building proper form.

Experts advises that as a beginner you should also be working on bodyweight movements like squats, lunges and planks, as well as trying some basic pull exercises like rows. To do a row, grab onto a bar and fall backwards. Making sure your feet are always touching the ground and pull your chest toward the bar. This move is made easier by starting in an incline position – the more parallel you are to the ground the harder this is to going to get, and that’s your progression.

Once you’ve tested out the beginner’s exercises and are happy with them, put them into a complete routine with this calisthenics workout for beginners.

Does “calisthenics” make you think of people in retro tracksuits doing push-ups during gym class or military basic training? Same. For whatever reason, in the modern-day era of über trendy fitness, the word “calisthenics” has gotten left a few decades behind. In reality, calisthenics is an important part of every single person’s fitness routine-and, actually, you’re probably already doing them on the regular.
#KhabarLive #hydnews