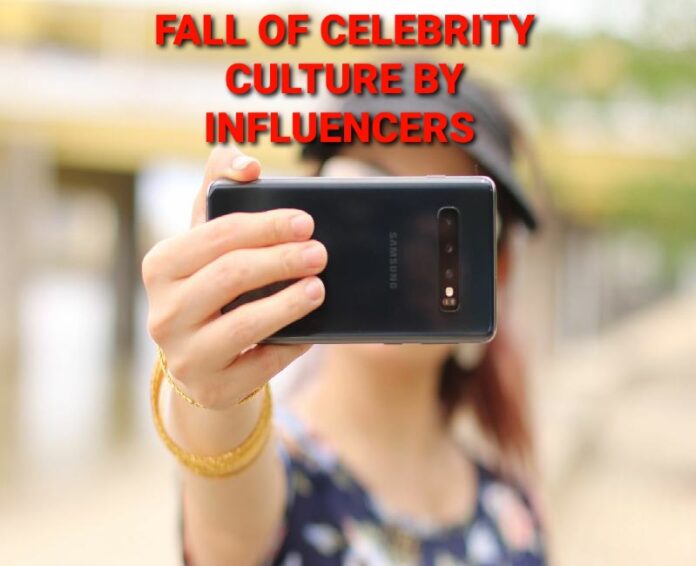 At first glance, celebrity endorsements may seem like a product of the modern era, which came of age with the advent of television and was driven to new heights by the global explosion of the internet.

With everyone across the globe on lockdown during the Covid-19 pandemic, celebrities are getting battered and bruised from a previously adoring public. The rise of the pandemic brought with itself the beginning of the end of celebrity culture. It seemed no longer possible to maintain a meticulously produced image during self-isolation. This led to a huge gap in content quality that almost immediately revealed that celebrities are out of touch with their audiences.

The downfall of celebrity culture
The celebrity culture has always amused its audiences with tales of extravagance and absurd political suasion. However, when the chips are down, the exploits no longer seem interesting but rather outright insulting.

Celebrities are posting and preening about their hardships and sacrifices on social media, where photos of their massive homes, elaborate personal gyms, mesmerizing backyards, elegant interiors, and other expressions of wealth grate on the nerves of millions who had lost their jobs.

Celebrities, of course, are not always spectacularly rich. They are challenged with walking on a fine line between living a fantasy life of glitz and glamor and not flaunting much to the point of alienating their fans. Before the lockdown, most people did not have as much uninterrupted time to binge on celebrity news. But that has changed drastically, and a lot of people didn’t like what they saw.

Celebrities have proved to be unreliable guides for their followers and brought out more resentment than reassurance. For instance, Madonna’s obscure Instagram videos in March were flagged for spreading about a coronavirus conspiracy.

Another aspect was that of the exposure of Ellen DeGeneres’s toxic behavior when it comes to employee culture.

The rise of the influencers
Influencers have seemed to be rising the rank to fill the gap between the celebrities and the audiences. Social media stars are not only earning greater influence and attention than celebrities, but their lives have begun taking on the hallmarks of the celebrity lifestyle.

There are many Tik Tok influencers who have taken on acting roles in movies and web series like Faizal Shaikh and Ruhi Singh, who have been signed up for ALTBalaji’s ‘Big Baang – the sound of crimes,’ Sachin Tiwari, who played a role in the film based on the life of Sushant Singh Rajput, Vishal Parekh who is making a screen debut in a Gujrati web show. These Tik Tok influencers are easily recognizable amongst online audiences, especially the youth.

There are also many YouTubers who have made it to the big screen. Grace Helbig, the creator of the YouTube channel it’sGrace, has co-produced and starred in the feature film Campa Takota alongside other YouTube friends Hannah Hart and Mamrie Hart.

Another YouTube influencer Shane Dawson made his Hollywood Debut with the comedy-horror Smiley in 2012 and then starred in the 2014 comedy flick Not Cool.

Apart from films and production, brands are also on the lookout for influencers from other niches like YouTubers in tech, financial advice, fitness Instagram influencers, fashion, etc. Take a look at how brands collaborate with such influencers to make the most of their campaigns.

1. Sprint
Sprint collaborated with influencers like Lele Pons, Bradley Martyn, and other influential personalities for their #LiveUnlimited Campaign. All of these social media influencers have a massive following. Sprint created a video ad featuring all the 5 influencers. The video ad got over 200K views on YouTube. Lele Pons also created a video and uploaded it up on Instagram, which generated over 7.4 million views!

2. Blue Apron
Blue Apron collaborated with bloggers like Naomi (Love Tanza) and Anne (Fannetastic Food) to build brand trust and increase awareness. The influencers wrote simple reviews of Blue Apron and why they liked the services, also highlighting the recycling program. The top 100 readers to click on the links were to receive two free meals from the brand.

The campaign was a huge success and was done again with another set of bloggers. The brand now sponsors various podcasts of influencers to gain traction and grab the attention of people.

3. Audible
Audible is the go-to place for audiobook lovers. The brand collaborated with various YouTube influencers to promote their brand and drive conversions. These influencers were across niches like gaming, style, and entertainment. Through the campaign, the brand was able to generate more than 82 million views.

One of the well-known YouTubers that the brand collaborated with was Grace Hellbig.

4. Lynda
The biggest online learning portal, Lynda chose to partner with podcast and YouTube influencers such as Rooster Teeth and The Fine Brothers.

Through the campaign, the brand was able to reach out to 46 million people! What’s more, is that Jack Douglass incorporated the content from Lynda into his regular videos, which received over a million views as well.

Numbers don’t lie
A recent study published by Fohr showcased that the average screen time is around 5 hours and 40minutes per day. It is estimated that this will only continue to increase as we distance ourselves from the real world.

For brands, this is a great time to share impactful messaging that will nurture current customers and provide value to them during unforeseen circumstances. It has been observed that the more time people are spending consuming content, the more time they are also spending in monitoring the content.

What audiences are looking for are friends and familiar faces that they can trust and who can symbolize a sense of normalcy before the global pandemic hit.

Recent Studies by Google have shown that fans are more engaged by influencers than celebrities. Top YouTubers get 3X more views on their views as compared to celebrities.

As marketing budgets are also being tightened exponentially, every dollar spent is being scrutinized. As companies are making these cuts in drastic ways to ensure their survival, influencers are also reducing their priced rates in order to continue getting businesses.

Social media influencers shoulder challenges
Brands, businesses, and influencers have found ways to support each other through covid-19 resource pages, financial relief programs or aid, or simply continuing to engage and support on social media. Many brands are indeed in need of content creators that can work outside the traditional, commercial and editorial scope and would greatly benefit from one-stop-shop advertisers like social media influencers.

Social media, at this point in time, is a community and not a competition. The influencers that are tapping into this perspective are finding ways to keep their followers more engaged and are using social media as a platform to unite and connect for good.

Final Words
Social media influencers are no longer minor characters in the area of influence who are filling the gaps where traditional celebrities remain unattainable. The future of influence comes to those who produce something beyond their own image. This demands a sharp awareness of how to speak openly with the audiences, share their own personalities and continue creating work that strikes a chord with the politically charged and aware audiences. #KhabarLive #hydnews