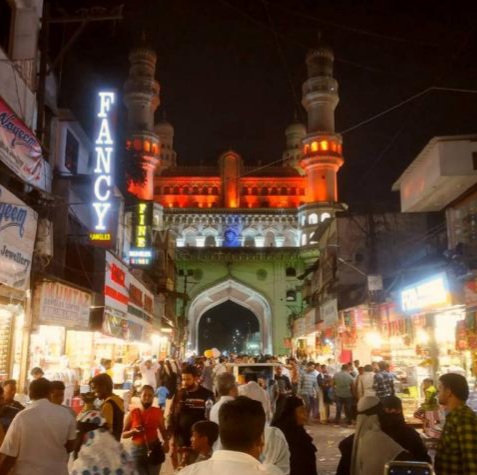 In the series of indepth coverage, #KhabarLive visited General Bazaar in Secunderabad, Badi Chowdi, Sultan Bazaar, and Charminar’s Laad Bazaar to gauge how businesses are doing post the pandemic in Hyderabad.

Hyderabad, like many other cities in the country, is home to several bazaars. These markets, spread across the city, are immensely popular among the city dwellers. While some of these bazaars are exclusive to one genre of commodities, few others sell a large variety of things. General Bazaar in Secunderabad, Badi Chowdi, Sultan Bazaar, and Charminar’s Laad Bazaar (also popularly called Choodi Bazaar) are some of the city’s favourite markets. 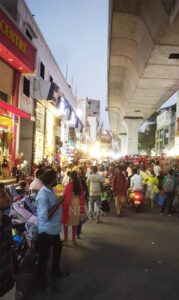 General Bazaar
Located in the heart of Secunderabad, just as the name suggests, almost everything that you require at home can be found in this bazaar. Spread across narrow bylanes, the market has shops selling readymade clothes, curtains, textiles, party goods, utensils and other household items, stationery, etc.

The bazaar is not as crowded as it usually is, but there are quite a number of people going about their daily shopping. Most are wearing masks, including those inside the shops. As we walk by the many shops, we come across G Satyanarayana, the owner of Narayan Steel Palace, a small shop that sells utensils. His shop has been here for around six decades now, but according to him he hasn’t ever seen a dull period as in the last several months.

“I had five employees in total. I was forced to lay off two of them. They then went back to their hometowns. Now they have returned, and I have given their jobs back. Business is picking up slowly, but it will take another 2-3 months more. The vaccine has brought us all hope,” Satyanarayana tells us with a smile. According to him, weddings help in money rotation. But as no ceremonies have been happening, the rotation came to a grinding halt. “Business had just begun to pick up, but from now until April-May there are no good muhurthams, so weddings won’t be happening. Business will pick up again only after the wedding season starts.”

On the other end of General Bazaar are several stores that sell electrical appliances. Metro Collection is one such store near Anjali Talkies. According to Arif Veerani, the owner of the store, business is limping back to normalcy but will take more time to return to earlier status. “Only once summer sets in will we see more business. Only 25% of business has resumed. From nothing we have come to 25%. It will take more time,” says Arif.

Right opposite his store is Rekha Cloth Showroom, a shop that sells clothes and saris. The owner, K Vidyasagar, stands at the entrance looking at those passing by. With no customers, it probably made more sense to breathe some fresh air outside. Vidyasagar believes that agriculture has a key role to play in all business. “Though indirectly, once the harvest season comes, the farmers will have money. They will travel to the city for shopping. This helps in rotation of money,” Vidyasagar explains. According to him, business has revived 40%. He also thinks that when the wedding season begins by April, his business will return to normal. This means another 2-3 months of dull business.

No trip to General Bazaar can end without a quick snack at one of the many shops whipping up some hot chaat. Balaji Jagannath is one of the popular chaat shops located inside the bazaar. As always, the place is teeming with people and the shop is doing brisk business. None of the employees are wearing masks. When asked how the business was doing these days, Karthik Vyas, the owner of Balaji Jagannath, dismissing the fear of COVID-19 as a figment of the media’s imagination, says, “We don’t wear masks and customers also don’t wear masks anymore. Everyone has understood that it was the media that was hyping the virus. Everything is back to normal, including our business.”

ALSO READ:  Red Hot Chilli Pepper: Beat The Chills With Some Of The Country's Fiercest 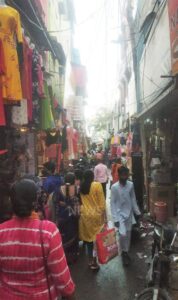 Shri Vinayak Textile’s Rahul Kenchey also agrees. He feels the footfall has increased but the number of actual shoppers hasn’t improved too much. “Business is definitely picking up, but very slowly. It had picked up during Diwali and Dussehra. But now, it has gone down again. It seems to be taking more time that we thought it would,” he notes.

Sri Kishan Suraj Karan Bajaj Bag Store has customers checking out travel bags. They’re happy that travel is opening up. “During the last few months, as travel was not possible, the sale of bags had been badly affected. Now people have begun travelling. Though business has picked up, it will be back to normal only when schools reopen,” explains Rakesh Bajaj, the shop owner.

Charminar’s Choodi Bazaar
No visit to Hyderabad is complete without visiting the iconic Charminar. Thanks to the upcoming Republic Day, the heritage structure is illuminated in the colours of the Indian flag. Business is on as always, but the crowd is way lesser than usual. A trip to this part of the city makes you feel like coronavirus is a thing of the past. The only ones wearing a mask are those who are travelling to the city or those visiting from other parts of the city. 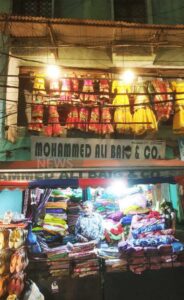 Choodi Bazaar, located in a lane perpendicular to the iconic structure, has well-lit shops selling beautiful decorative bangles. Generally, the entire lane is teeming with shoppers and local residents alike, but now navigating through the market takes hardly any effort. According to Mohammed Imran, the owner of Sana Bangles, business is picking up. “About 75% business is back. This is because tourism and weddings are happening,” says the optimistic businessman. Though Hindu weddings will not happen until April-May, the Muslim wedding season has begun, and this comes as a relief for these shops who haven’t really seen much business for a long time.

Mohammed Ali Baig and Co. has been selling curtains and other textiles for over 150 years. They have been in the same business for the last four generations. Located nearest to the Charminar, Baig’s is the first in the series of shops located in the area. When asked about the business, Baig puts his hands on his head and sinks his face into one of the curtains piled up at the shop. His expression says everything about how businesses around the area are feeling. When he finally raises his head, he tells us, “People haven’t been buying anything. There are days we have no business at all. There is no money in the market. It seems like the dull period isn’t over as yet.”

Most shops we enquire at admit that though gradually, business is picking up. They understand and accept that the pandemic has crippled the economy and realise that it will take more time for things to settle down and business to pick up again. Some shop owners have their fingers crossed that the vaccine will give the economy the much-needed push it needs. Some wait with bated breath for schools to open and the wedding season to kick in. #KhabarLive #hydnews