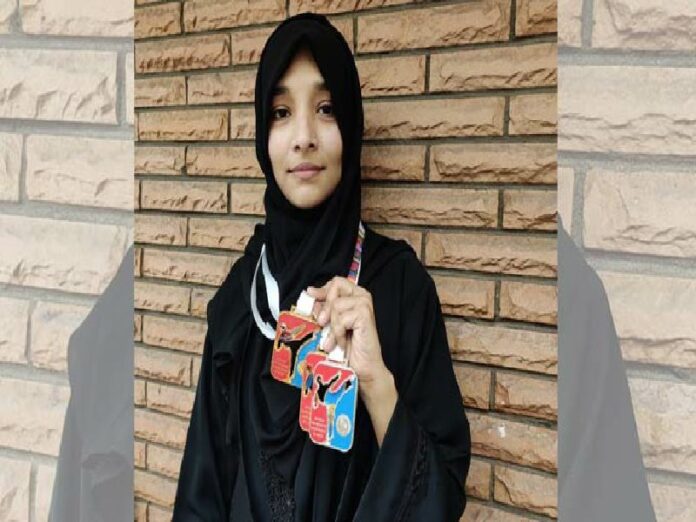 Sports such as Taekwondo, Judo and Karate are still dominated by men in India, but Hyderabad’s Hajira Hafeez has broken gender stereotypes by winning three International medals — two gold and one silver, in the Kung Fu and Karate at the Asian Tournament.

A mother of three, Hajira excels at being a professional, a sportswoman and a homemaker. She is now gearing up to represent India in a tournament in the United States, followed by one at Singapore.

Overcoming barriers and unequal opportunities, Hajira stands tall as trailblazer. She claims that what sets her apart is her perseverance and commitment towards herself. “My sporting desire pushed me to pursue the yearning to practice Kung Fu. I practice at a school in Mehdipatnam,” she said.

Talking with #KhabarLive about her childhood, she shared: “I was fond of Kung Fu and Karate right from my childhood days but could not pursue it then as my parents didn’t permit me. They wanted me to excel at academics and become a doctor.”

Hajira joined a college to pursue medicine, but had to stop in between after her cousin, who was also studying to become a doctor, passed away. However, a year later Hajira decided to pursue B Pharmacy. She quiped: “I thought that understanding medicine is better than treating people. I wanted to study the mechanisms of drug development.”

It was during this phase that Hajira started understanding thyroid cancer issues and went on to pursue M Pharmacy, and in between, also coaching students who wanted to pursue MBBS. While she was still pursuing Masters, she was married to an engineer based in Saudi Arabia. She went on to have three kids, but never gave up work. Currently, she is pursuing a PhD in pharmaceutics.

Such is her passion for the sport that even during the pandemic, she worked hard for 12 to 13 hours, juggling between her projects and passion. The 30-year-old is coached by trainer Patan Jameel Khan, also an international champion, who has not only created a Guinness World Record, but has also won 48 medals from the US alone — including 18 Gold, 12 Silver and 18 bronze. #KhabarLive #hydnews