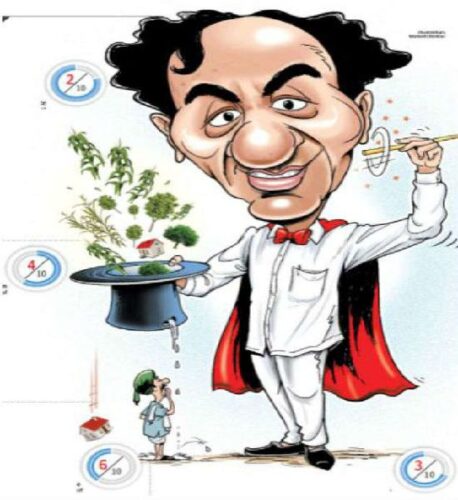 A virtual voter testing ground formed in Huzurabad Assembly constituency, where by-election is likely to be held soon, will be the test ground for Dalit Bandhu scheme announced recently by Telangana Chief Minister K. Chandrasekhar Rao for economic upliftment of Dalits in the state.

As part of the preparations for implementation of the scheme, the chief minister on Monday held a day-long meeting with ministers, officials and 450 representatives from Huzurabad.

The state government has already announced that under the scheme, financial assistance of Rs 10 lakh each will be provided to the eligible beneficiaries from Dalit community.

Under the first phase 100 families from each of the 119 Assembly constituencies will be identified. The government has announced an allocation of Rs 1,200 crore for the scheme.

In the marathon meeting, the chief minister asked the participants to work for the success of the pilot project in Huzurabad.

By making the scheme a success in Huzurabad, it should be made a torchbearer for the Dalit community in the entire country. He reiterated that the Telangana Dalit Bandhu Scheme is being implemented to remove economic disparity and also social discrimination of the Dalits.

KCR, as the Chief Minister is popularly known, desired that with the financial assistance given under Telangana Dalit Bandhu Scheme, the Dalit community should develop itself as a business community by selecting industries, employment, and business of their choice.

He assured Dalits that the government will provide them reservation in setting up fertilizer shops, medical shops, rice mills and wine shops.

He wanted three phases for implementing the scheme. All the issues pertaining to Assigned and Gram Kanta lands of Dalits and other issues should be solved and after developing the basic infrastructure facilities in Dalitwadas the scheme should be implemented.

“Dalit Bandhu is not only a programme but also a movement. The entire Telangana Dalit Bandhu Scheme is based on the success achieved by the representatives who came from Huzurabad,” said KCR.

“We should get rid of vengeance, enmity and develop mutual faith and trust. Withdraw all the cases in the police stations in Dalitwadas, which were filed against one another. Develop mutual fraternity and this will lay the path for the success. If Dalits are economically empowered, they would be away from any discrimination. All those participants here today should get victory in Huzurabad and create awareness later all over the State for Dalits.

“If Dalit Bandhu Scheme is successful, the Dalit development will take place. It is very unfortunate that the Dalits who have the talent and skills are kept away from the productivity sector by keeping them away from the villages in the name of untouchability.”

He also announced that Dalit Security Fund will be set with the government and beneficiary participation on permanent basis. This will be in addition to the financial assistance given by the Dalit Bandhu Scheme. This Fund will be managed by the district Collectors with a committee of the beneficiaries. Every year a minimum amount will be deposited and it will be continued regularly to further help Dalits to become financially strong.

The CM instructed the officials concerned to conduct a special drive in Huzurabad for a week to 10 days to solve all the land related issues of the Dalits.

“In Huzurabad there should not be any Dalit family without house. Cent per cent all the housing problems should be solved. The government will extend financial assistance to construct a house for those who have vacant sites. We will implement this in a phased manner all over the State for all the Dalits,” he said.

“Identify those suffering with ailments in Dalit wadas in Huzurabad constituency. Officials should prepare a report and the government will extend the medical help. Prepare reports on pensions, ration cards and identify all the problems and send them to the government,” the CM added.

The choice of Huzurabad for the pilot project has already come under criticism from the opposition. Telangana Pradesh Congress Committee (TPCC) chief A. Revanth Reddy called the scheme a poll stunt.
Huzurabad seat fell vacant with the resignation of Eatala Rajender, who was dropped from the Cabinet in May following allegations of land encroachment.

Rajender has quit Telangana Rashtra Samithi (TRS) and joined Bharatiya Janata Party (BJP). The saffron party has already announced that Rajender will contest the by-election on its ticket. #KhabarLive #hydnews