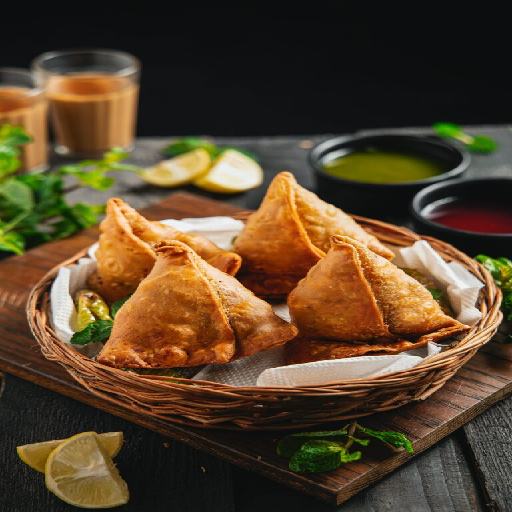 Crispy, flaky Samosa is the perfect appetizer for any celebration. Filled with a spicy potato filling, this Samosa is also vegan! Samosa is one of the best Indian snacks ever! That is why most of us love it. If you are not Indian and have eaten them at any Indian restaurant and most of you already are in love with the flaky pastry filled with spicy stuffing. 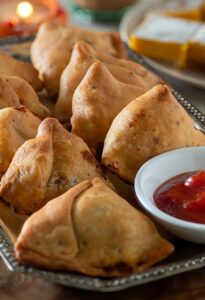 It’s 5 in the evening and the halwais ignite their burners, and people in remote village areas, cities and elsewhere gather around the big kadhai to watch their favourite snack being fried in hot oil till it turns crispy and golden brown. Samosa needs no introduction, as it’s the most widely eaten tea time snack in India, and comes in various shapes, sizes and tastes.

This little pyramid travelled long distances and went through various transformations to become India’s most beloved snack. It would be unfair to central Asia if we credit India as the creator of this celebrated delicacy: the extent of our contribution to the samosa we eat today was limited to playing the matchmaker, by finding the right pair to stuff into this savoury pastry.

The journey of Samosa began around the 9th century in west and central Asia, where it is mentioned by the names ‘Sambusak’ and ‘Sanbusaj’ in some Arab cookbooks and literary texts. Unlike today, its traditional variant was half-moon shaped, and contained meat, onions, raisins, other dry fruits and were deep fried. Fortunately, the technique of frying had been discovered in present-day Egypt around 2500 BCE.

Used by travelling merchants as a snack for long journeys, this savoury pastry arrived in south and southeast Asia and Africa, and subsequently to the rest of the world, evolving as per the food habits of the locals.

The samosa reached India around the 13th century through the great mountains of Afghanistan. It did not have to struggle to make a place in the royal kitchen, and was served in the second course of a menu mentioned by Amir Khusro, royal poet of the Delhi Sultanate.

Ibn Batuta, the medieval Moroccan traveller also mentions a meal at the royal court of Muhammad bin Tughlaq where a triangular pastry packed with peas, pistachios, almonds, mincemeat and many luscious fillings was served on the guests’ plates right after sharbat.

The taste of Samosa had conquered the hearts of conquerors, however, it was still neither triangular nor with potatoes, which were yet to arrive in India. It was only in the early 17th century that the Portuguese introduced potatoes in India and began their cultivation in certain areas. 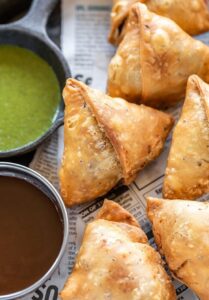 The rest of us were still clueless about potatoes until the 18th century, when the British got increasingly intrigued by this starchy vegetable, and decided to promote it pan India, along with other south American commodities.

Their love of potatoes was extraordinary: one Scottish naturalist used to bribe 1/3rd of a rupee to the Indian peasants to plant potatoes, and in Kolkata a contest was held for growing the best potato.

In the 19th century, the presently beloved stuffing of Samosa was starting to make its space in Indian household kitchens, restaurants and more. Local cooks had already started experimenting, and finally paired the potato with Samosa. They made the filling with mashed potatoes, cumin seeds, asafoetida, coriander seeds, dried mango powder, ginger, green chillies and garam masala, and gave it a triangular shape instead of semi-circular.

This is how the north Indian version of Samosa came into existence, which would later become the face of Samosas across the world.

Now going back to the 13th century, let’s find out what happened to the Samosas which travelled with the other merchants to different corners of the world. Wherever these Samosas went, locals adapted them and modified them as per the local food habits. In Portugal and Brazil, it became Chamuça, a triangular meat filled pastry, whereas in Arab countries and Israel Sambusak is filled with either meat, onion, and pine nuts, or cheese, or even chickpeas. There are many more variations of Samosa spread in all corners of the world.

When it comes to the Indian variety of Samosa, Punjabi Samosa is the most popular one which is loaded with potatoes, peas, paneer, and dry fruits. It is however, not the only kind India eats. To mention a few, in eastern India a smaller counterpart is found, named Singhara, which could be vegetable based or meat/ fish based. In the west (Gujarat), the filling is replaced with cabbage, and is popularly known as Patti Samosa.

Interestingly, the south Indian Samosa is consumed without chutney, which to north Indians is hard to believe and impossible to practise. Amongst all these different tastes and types comes a simple and sweet version from Bengal, named Labong Latka, which are little pastries dipped in sugar syrup and packed with mewa. 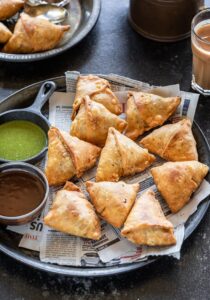 The popularity of Samosa in India is such that people often think its origin was in India, and why wouldn’t they, given how it unites people segregated by languages and religions. No matter where it came from, and no matter what all names it is called by, to us, Samosa is a very special part of our evenings, accompanied by red green chutney, a cup of chai, and never ending gossip. #KhabarLive #hydnews