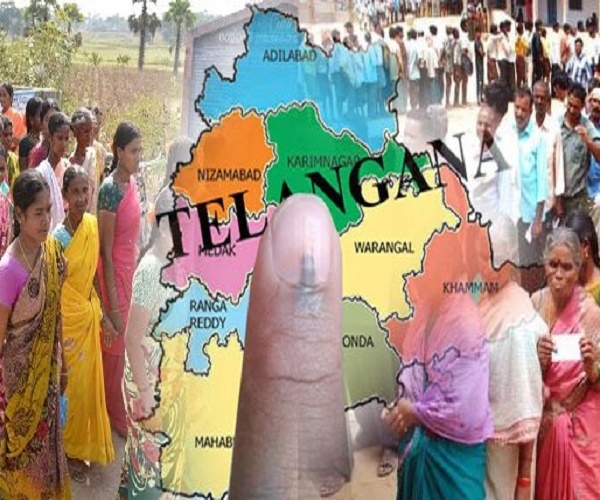 The political equations are rapidly changing in Huzurabad byelections. All political fronts taken as prestige issue to win this elections. The proactive Congress, the confident BJP and the ruling TRS leaders in the Huzurabad Assembly constituency seem to be on overdrive with every moves of the opponents. This strategy makes the polls quite interesting.

Though the saffron party leaders of the constituency have put up flexis, banners and other publicity material all along the way of Eatala’s padayatra welcoming him, the ruling Telangana Rashtra Samithi went a step further and erected similar flexis and banners next to the BJP banners.

According to BJP State general secretary G Premender Reddy and party spokesperson A Rakesh Reddy, the party cadre had put up flex banners and BJP party flags and at certain points, they even erected temporary arches with banners of Eatala, State BJP chief Bandi Sanjay Kumar and other prominent saffron party leaders from the State.

However, the local TRS leaders have arrived with men and material and in the presence of local police, they put up banners right next to the temporary tent erected near the local Anjaneya Swamy temple in the Battenivanipalli, the place where Eatala kick-started his yatra.

The TRS men have put up banners with Chief Minister K Chandrashekar Rao, IT Minister and party working president K T Rama Rao besides one prominent MLA from the neighbouring assembly constituency adorning them. One of the TRS leaders, Rama Krishna, speaking to The Hans India said, “Everyone here knows that Eatala was so far synonymous with TRS.

But, now we want to show the electorate that he doesn’t belong to our party anymore and also to show our strength when the former Minister takes out the yatra to woo the voters.”

However, with so many BJP and TRS flags side-by-side, Avinash Kumar, a resident from Hyderabad, quipped, “The pink campaign unleashed in the name of Tholi Ekadasi greetings looks like both BJP and TRS are fielding Eatala as their joint candidate for the ensuing bypoll.”

Meanwhile, Nizamabad like experiment to repeat in Huzurabad again as per the situation prevails.

Remember the elections to Lok Sabha in Nizamabad parliamentary constituency in May 2019?

As many as 177 turmeric farmers jumped into the poll fray demanding constitution of a turmeric board and remunerative price for their produce, which resulted in the defeat of sitting MP and Telangana Rashtra Samithi leader Kalvakuntla Kavitha.

The farmers together obtained about 90,000 votes and TRS leaders argued that Kavitha would have won, had all those votes gone to her.

A similar situation is likely to repeat in the forthcoming by-election to Huzurabad assembly seat, which was necessitated by the resignation of former health minister Eatala Rajender from the TRS as well as his assembly membership.

As many as 7,500 field assistants of Mahatma Gandhi National Rural Employment Guarantee Scheme (MGNREGS) are up in arms against the TRS government, for doing away with the system of field assistance and entrusting their responsibilities to village panchayat secretaries last year.

For the last few months, these field assistants have been agitating demanding that they be taken back into service, as they had done a lot of work during the Coronavirus pandemic.

Now, these field assistants have decided to show their protest by contesting the by-election to Huzurabad.

At least 1,000 field assistants are expected to file their nominations in the by-polls, with the prime objective of defeating the TRS candidate.

“If the government takes us back into service, we shall withdraw the decision, but if there is no response, we shall enter the fray and teach a fitting lesson to the ruling party,” they said.

The results are not far away, let’s wait and see. #KhabarLive #hydnews