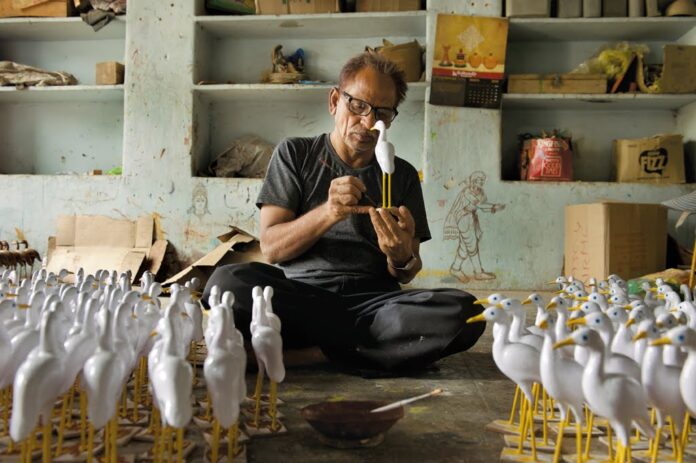 The land of art and crafts, Nirmal produces various toys and paintings that serve as iconic symbols for the state of Telangana. Nirmal toys and paintings are the only ancient handmade art which has survived in the state. The origin of this art can be traced back to the 14th century, now this art is dying.

All the artists in this town have gotten together to create an artisans co-operative society, recognize themselves, and set up a store to sustain this dying art form. 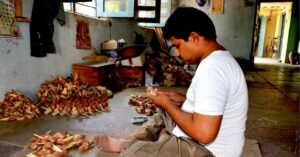 Nirmal district in Telangana was once famous as a production centre of as diverse things as cannons and toys. While the foundry supplied heavy artillery to the army of the Nizam of Hyderabad, the Naqqash craftsmen and artists brought out exquisite wooden toys and duco paintings under the name of Nirmal Art.

Upon asking Laxminarayana, an artisan from Nirmal’s Nakkash community, if he has a holiday on May 1, he said, in a rather exasperated tone, “If we take a holiday, who will work? The work will get delayed by a day, which means our payment gets delayed by another day. We don’t have the luxury of taking a holiday.” Even on International Labour Day, the artisans of Nakkash community of Nirmal work to make their ends meet. Not working on a particular day meant an empty stomach for the whole family for that day.

Carved out from the erstwhile district of Adilabad, Nirmal is now a separate district, located in the north of Telangana, sharing its border with Maharashtra.  The Adilabad district, before the reassigning of new districts, had a densely forested area with large parts of it inhabited by tribal population. The forest area is also home to the Kawal Wildlife Sanctuary. Today, a part of this forest area falls under the newly formed Nirmal district. 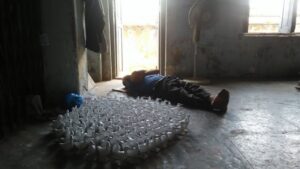 Historically, the Nirmal arts and crafts draw their inspiration from various schools of art such as Ajanta, Kangra, and Mughal miniature arts.  The artisans of the ‘Nakkash,’ community belong to a backward caste. The people of the Nakkash community have not only been surviving on the art as a major source of livelihood but have ensured that this art survives the test of time.

The community and its work got its first recognition when the Nawab of Hyderabad visited this town in the 17th century.  The then local authorities decorated his seat with various fruits, vegetables and showered him with flowers cascaded with the golden colour to welcome the Nawab.

These Nakkash artisans are skilled enough to make toys in any possible shape and paint any given design – from miniature insects and animals to large mandapas.

The three main ingredients that go into the making of these toys are wood, coluor, and lye. The toys are made from the wood of the ponika trees (Govotia rottleriformis), which are vastly found in this region. Ponika wood is more pliable and flexible compared to the wood from other conventional trees, giving the artisans an advantage of making a range of toys from this lightweight wood. The colours are naturally drawn from herbs, vegetables and minerals. The lye is made of tamarind seeds (chintha ginjallu), which are soaked in water until they become soft. These are then ground to turn into a paste – the lye.

For the paintings, the artisans use teak wood instead of Ponika wood. The teak undergoes a process which involves lacquering the wood surface to get a clear black background, which is then sprayed with colors to get the desired background colour. The artist then paints the designs which are already determined, on the wood. The painters work all around the year except during summers when the paint gets solidified quickly due to the heat. 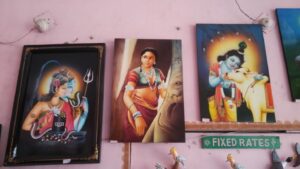 Apart from these, there are many invisible human labour hours the Nakkash artisans put in to bring these toys and paintings to life.

Rajashekar Nampalli, a renowned artisan and recipient of numerous awards from the then Andhra Pradesh government says, “Though I have been working in this field for more than two decades, I hardly earn about ₹6,000-7,000 in a month,” To earn this meager income, Rajashekar works relentlessly for almost 12 hours every day from eight in the morning to late in the night, taking occasional breaks.

These Nakkash artisans only make toys in bulk.  Depending on the size of the toys, the quantity is decided. The process begins with the raw wood cut into desired blocks in the sawmill, which is then prepared for applying lye and colours. The artist, with extreme care, then cuts the wood in required dimensions and adds colors to bring it to life. 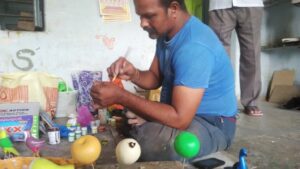 Laxminarayana says with pride, “This process requires the greatest level of imagination by an artisan. Since a single artisan is responsible for creating a toy from the beginning to the end.” The Nakkash workers organized themselves into a cooperative society in 1955, which has been patronizing the Nirmal art ever since.

Rajashekar’s father, who was also an artisan who made the Nirmal toys, and his forefathers were also traditional Nakkash artisans.

But unlike Rajashekar, the next generation is taking up more lucrative careers and showing an interest in getting educated in the cities or overseas. Mohan, who is also practising this art as part of family tradition, says “I practise this art with an intention to save this art and tradition. Today, not only my children but even those artisans who were once proficient in the art have abandoned the practise.” 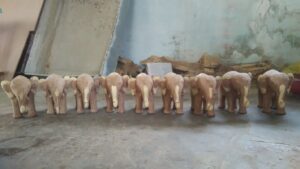 The art which once flourished in the name of these artisans is on its deathbed with just 45 Nakkash artisans still practising the art. In recent years, with the help of state and central governments, the cooperative society has conducted a workshop. In an attempt to revive the art, the workshop’s main objective was to train interested people outside the Nakkash community to master the art form.  But only three workshops have been conducted in the last decade and the artisans who train complain that they don’t see any commitment in the people who attend the workshops.

ALSO READ:  Get Active, Healthy And Energetic With This 'Food' For Night-In-The-Office Employees

The government support to either the artisans or the society in terms of promoting the arts or monetary support has been close to negligible. “In spite of a few political promises by the ruling party, there is not much support we get from the state,” says Purshotham, the head of the cooperative society. 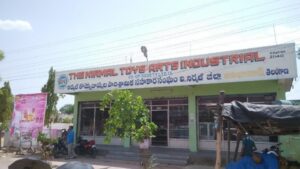 The cooperative society buys Ponika wood from the forest departments once a year. The wood is bought mostly from Echampadu and Kanapur forest range depot. But the availability of Ponika wood has been drastically reduced. The primary reason is that the forest department is uninterested in providing the wood to the artisans as the revenue generated from the sale isn’t viable, as there are no other buyers of the wood but the artisans.

The other reason, however, is the natural depletion of the forest due to huge deforestation and urbanisation. Rajashekar says, “Though the state government and forest department encourage afforestation under Telangana Haritha Haram (literally translated-green garland of Telangana) programme, it doesn’t encourage or plant any Ponika plants”.

The art still has relevance among art connoisseurs and patrons. The Nakkashi community won the prestigious Kalamani Award during 30th Surajkund International Craft Mela, 2016 held in Haryana. Even individual artisans and the cooperative society have won several awards, brought laurels to the community and have been appreciated at numerous events. Yet, none of this has caught the attention of the government and hasn’t brought any change in the lives of the artisans. They are merely left with the appreciations and poverty, as empty words don’t fill stomachs.

Initially, the Nakkash artisans would prepare toys of vegetables, fruits and other small things which were largely a part of the daily life – even the painters would paint images of gods and goddesses. But with globalisation and liberalisation, the artisans are forced to create newer kind of toys and paintings to compete with the market outside that is already dominated by plastic toys. The artisans are also forced to use chemical oil colors to get a glossy finish to the toys. #KhabarLive #hydnews