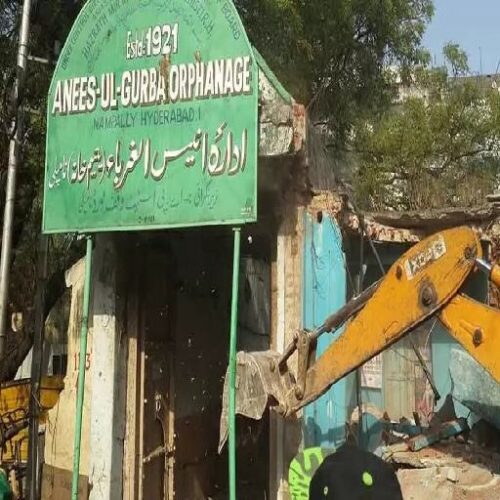 The big question raised on Telangana government is where are the orphanage residents 25 inmates of the Anees-ul-Ghurba since last 18 months? The whereabouts not know to anybody despite asking several times to various authorities.

These orphanage inmates, who were handed over to the Telangana Minorities Residential Educational Institutions Society (TMRES)’s facility four years ago under certain situations, are left to their fate.

The shift took place when the dilapidated orphanage owned by the Wakf Board was demolished to make way for a new building. These inmates had been sent back ‘home’ from TMREIS schools following the Covid-19 lockdown imposed in March 2020.

In 2017, the government has sanctioned Rs 20 crore and an adjacent piece of government land, a one-acre plot, to construct a building with the facility designed to accommodate 600 inmates (320 girls and 280 boys), and a provision for commercial leasing of part of the land for generating income.

At that time, 60 inmates were living in the orphanage. But as per TMREIS, only 25 children were admitted to its institutions and these children were later shifted to the TMREIS-run Musheerabad Girls School.

While officials in the Wakf Board say they did not have any information on the whereabouts of the Anees-ul-Ghurba inmates, TMREIS functionaries say the children were handed over to their families last year, following imposition of the lockdown and closure of hostels.

While some officials of the Wakf Board were not in a position to furnish any details about these children and admitted that they were not even sure of the number of children handed over to TMREIS custody, Wakf Board chairman Mohammed Saleem said: “These children were handed over to the TMREIS at the instance of government adviser on minorities welfare A.K. Khan. I will discuss with our CEO and the TMREIS about the children and let you know.”

He said, “We will take over these children” when construction of the new Anees-ul-Ghurba complex is completed.

TMREIS secretary B.S. Shafiullah stated that, during the first lockdown in March 2020, these students were handed over to their families “as we shut all our hostels.” These students “had even attended our online classes. We have the tracking records of these students. Our principals and teachers are in touch with them and their guardians. These students will be accommodated again at the time of reopening of the hostels,” he said.

Speaking to #KhabarLive, Choti Begum, a mother of two inmates at the orphanage, said her two daughters — Mohammadi Begum (10) and Hajira Begum (7) who were boarding at Musheerabad School — were handed over to her in March last year. She said these children were admitted to the orphanage after the demise of their father as she was not able to provide education and take care of them.

She said her daughters were very happy in the hostel as they were getting proper education and care. When asked if anyone was in touch with them from TMREIS or the Wakf Board, she replied that initially teachers from TMREIS were in touch for a few days. “Now no one calls or contacts us,” she said.

Meanwhile, Abid Rasool Khan, former chairman of the Human Rights Commission, addressed a letter to CEO of the Wakf Board, expressing concern about the safety and well-being of the inmates. He said TMREIS should have contacted the Wakf Board before asking the guardians to take their children back.

He also said that since many of the children came from families that were in turmoil, the Wakf Board should have taken better care when the TMREIS shut its hostels, and taken the children back and taken care of them in alternative accommodation.

However, taking serious note of the issue, recently appointed Deputy CEO Md Safiullah ordered a probe into the matter and deputed one of the officials.

The whereabouts of most of the orphans at Anees-ul-Ghurba, oldest orphanage in Asia, is yet to be known and their records remain unavailable, ever since the nationwide lockdown was announced in March 2020. All the 80 residents were reportedly relocated to various centres of Telangana Minority Residential Schools across the city, in view of reconstruction of the building at Nampally, which started almost two years ago.

Activists, who regularly used to visit the orphanage, are trying hard to find answers from the Wakf Authorities or TMREIS (Telangana Minority Residential Educational Institutional Society) from the start of 2021, but could not find satisfactory answers and have now decided to approach the High Court by filing a Public Interest Litigation (PIL). Asif Hussain Sohail, a social activist, who used to visit regularly to the Orphanage, pointed out that the explanations coming from TS Wakf Board and TMREIS were contradictory and different branches of Telangana Minority Schools, which provided accommodation to these children remain clueless.

It is believed that half of the students who were young and cannot be accommodated in the Government-run school which starts from standard six and were handed over to parents or guardians, but no proper records were maintained. However, taking serious note of the issue, recently appointed Deputy CEO Md Safiullah ordered a probe into the matter and deputed one of the officials.

Following failure of authorities to provide details about the inmates of Anees-ul-Ghurba, the activists have raised a pitch, asking TS Wakf Board and TMREIS (Telangana Minority Residential Educational Institutional Society) to make public their particulars and ensure that around 200 children are in safe hands.

On the other side, following handing over of the land which housed the century old state-run orphanage, Anees-ul-Ghurba, to TMREIS in the recent years, the inmates were shifted to institutions being run by the Society. However, following enforcement of Covid-19 norms since March 2020, most of them were sent back to their places. But the activists who visited the locations where the children were sent say most of them do not have parents to take care of them. “When I questioned Mohd Saleem, Chairman, Wakf Board, he said the children were at a Telangana Minority Welfare School in Musheerabad. But when I enquired about the children there, the caretakers informed that the children were in Goshamahal, a branch of the same school. But the people responsible for the school in Goshamahal have no clue about the children and I was asked to visit Barkatpura branch,” claimed Asif Hussain Sohail, a social activist, who used to visit the orphanage regularly.

When contacted, Mohammed Abdul Lateef, the Academic Head of TMREIS, refuted the claims of activists, saying the actual number of children of the orphanage was different and they were not completely orphan. “These children had guardians and as soon as the lockdown was announced, they were sent back home with their respective guardians,” he pointed out.

Not satisfied with the claim of authorities, activists insist that explanations given by Wakf Board and TMREIS were contradictory and that the TMREIS schools which earlier provided accommodation do not have any clue about the whereabouts of children. “When the entire nation was under lockdown, how could the guardians come to pick the children? Why did the schools send back all the children? Nobody seems to be taking proper responsibility of children and they do not have proper details of present addresses of the children,” rued Sohail. #KhabarLive #hydnews