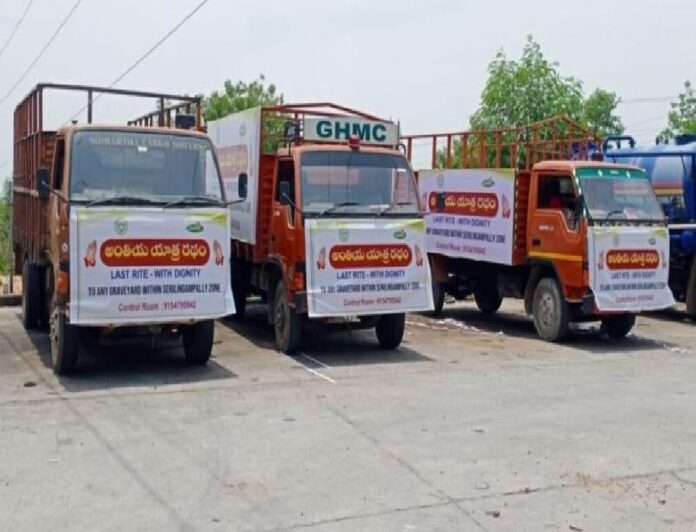 This is one of the sheer example of Telangana government initiative is not getting response from citizens in this pandemic crisis.

The ‘Antim Yatra Rathamulu’ initiative that was launched by the GHMC to transport the bodies of those who died of Covid-19 has been receiving poor response from the kin of the victims. It could be considered as a classic case of misjudgement with regard to selection of vehicles for the purpose.

The corporation has provided a mini-lorry with a driver and support staff. The vehicle does not have a stretcher or any other equipment that can provide a decent final journey.

As a result, the victim’s kin or the civic body staff has to lift the body between four and five feet into the vehicle. Family members said it was disrespectful if bodies are carried in such vehicles.

The GHMC had launched the scheme to reduce the financial burden on people performing the last rites of Covid-19 victims. It pressed into service 14 vehicles across the city to carry the bodies to crematoria, burial grounds or graveyards without charging any fee.

Corporation authorities on May 24 said that bodies would be picked from hospitals as well as from homes. The authorities also appointed officials to monitor the scheme and issued a list of phone numbers. The service received many calls, and many people preferred it to the free ambulance service.

Sharing his experience, Navjot from Ramnagar said that at first his family opted for the free service provided by the GHMC. Upon calling the number provided by the corporation, a vehicle arrived within an hour.

“We were shocked to see the vehicle. Firstly, it was very difficult to lift the body up to about five feet since none of them was ready to carry it fearing the Coronavirus. Secondly, the vehicle did not have a stretcher or anything to tie the body. Citing these, our family decided to use the free ambulance service”, he said.

Swetha, from Uppal, said, “It would be a great disrespect if my family member’s body is taken to the graveyard in such a vehicle. Even animal rescue vehicles are better equipped. The vehicles are more like ‘Antim insult Rathamulu.”

When #KhabarLive  asked the official concerned about the probems, the official assured that the matter would be taken to the notice of the higher authorities.

Despite all efforts no person contacted the above numbers to avail this initiative services. #KhabarLive #hydnews