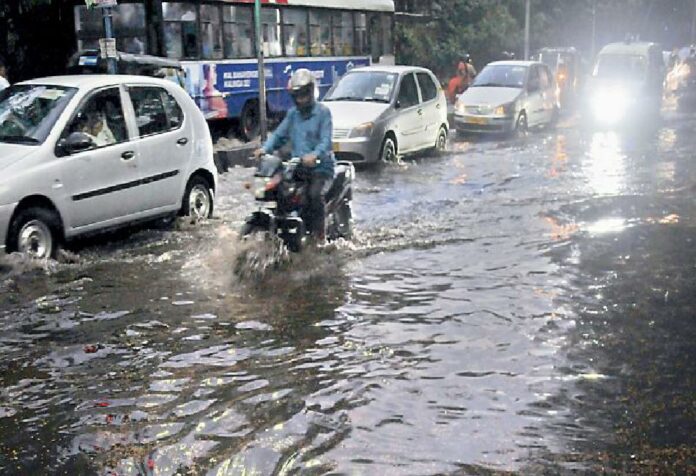 Despite rainfall hurdles and citizen difficulties GHMC delaying the Comprehensive Drainage Network Plan (CDNP) to improve the stormwater and nala network spread across twin cities of Hyderabad and Secunderabad. The reason is still not known to authorities.

After seven years, the Greater Hyderabad Municipal Corporation (GHMC) has now decided to “redesign” the existing nala and stormwater network, calling the project, the Comprehensive Drainage Network Plan.  Zonal commissioners of GHMC have already spent between Rs 5 crore to Rs 6 crore for “conducting studies” and to “prepare a survey report”.

The comprehensive design will cover the entire area within the outer ring road (ORR) limits, and the project would be amalgamation of the Kirloskar and Voyants committee recommendations.

Sources in the corporation said that the “project would not be a practical solution”, since it would eat up several areas adjoining city nalas, which would require and “force a displacement and disruption of livelihoods” of people in several colonies.

Interestingly, though it rained suddenly a few days after city mayor Gadwal R Vijayalaxmi said she would pray that it would not rain for the next five years, the city IMD is “predicting no or little rainfall” for the next several years.

After the mayor’s controversial wish, the IMD had predicted moderate rainfall in the next 48 hours, accompanied with gusty winds. With a weak drainage network presently, incessant rains could once again check the efficiency of the city nalas and expose the faultlines.

The civic body had earlier conducted a nala survey during October 2016 and completed it in January 2017.  Besides a manual survey, corporation officials had used unconventional methods for accuracy.

Drone cameras were used for aerial surveys and video-documenting areas by utilising the GPS systems was also undertaken. The Geographical Information System (GIS) wing of the GHMC was actively involved in the exercise.

ALSO READ:  The Great Feeling Of 'Nizami Ramzaan' In Hyderabad

GHMC officials have identified 12,182 unauthorised constructions in 173 major nalas, spread over 390 kms in the city. The corporation then spent Rs15 crore for surveys, despite not removing 47 critical bottlenecks (of 16.66 kms length) at the cost of Rs 230 crore since 2017.

The Strategic Nala Development Programme (SNDP) wing of the GHMC has now decided to leave their mark to improve efficiency of city nalas. Taking into consideration recommendations made by the Kirloskar Committee and Voyants Consultancy, the SNDP has decided to completely redesign the nala project, after roping in experts from irrigation and other departments.

The chief engineer said that LB Nagar zonal commissioner Upender Reddy has already submitted a survey report pertaining to the zone, which was most affected due to flash floods during October last. She said the corporation would arrive on the financial evaluation only after submission of all reports.

“I cannot disclose financial estimates due to enforcement of the model code of conduct (MCC) for MLC polls for graduates’ constituency,” she explained.

However, sources in the corporation said that the ongoing survey and its implementation is going on in an “unrealistic way”.

They said that redesign of existing nalas would involve entering and clearing of lands across several residential areas adjoining them.

“Who will give up either their property or land for widening or allow intrusions into their properties? It would not only displace private properties but also creates a ruckus while implementing the project,” sources added. #KhabarLive #hydnews