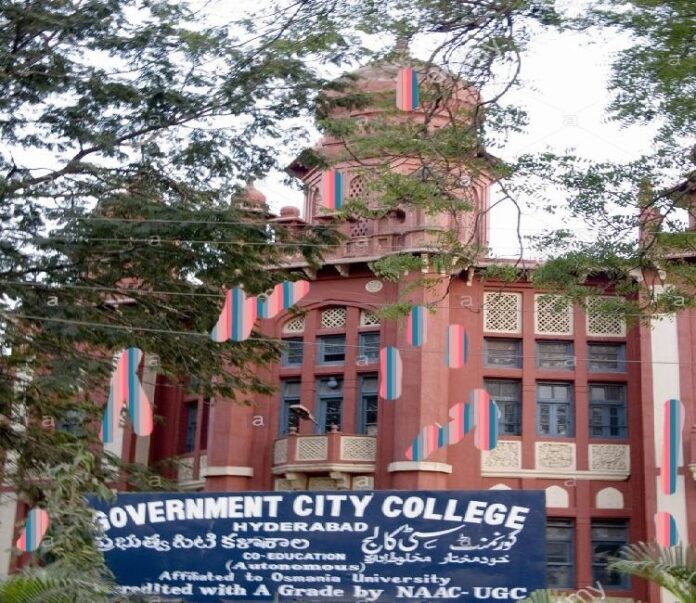 #SaveHeritage slogan making waves in Hyderabad. In this regard, the iconic Indo-Saracenic style Government City College building, situated adjacent to the Telangana High Court in Hyderabad, lies in a state of neglect. Heritage conservationists allege that the repair work were sanctioned in 2017, but still no major part has been taken up. The historic structure remains the same.

The college was established in 1921 during the rule of the Nizam Osman Ali Khan Asaf Jah VII. It was constructed on the banks of Musi River. The century old building has remained in shambles for decades notwithstanding the fact that it was once listed as a Grade II-B building by the then Heritage Conservation Committee (HCC). Now, due to no restoration work and lack of funds, it is being neglected.

Mohammed Habeebuddin, a Heritage conservationist, said, “In 2017 restoration of the building was started but still the state of the structure remains the same. Its walls are crumbling and are covered with green algae. Most walls have developed cracks and would crumble if not repaired.”

According to officials, the restoration work was sanctioned in a phased manner. The first phase was taken up with a sanctioned fund of Rs 1.8 crore by the government. The work was started after procuring the necessary raw material. Later, due to insufficient funds, it was stopped.

One can observe leakage from roof and pipelines which turned the outer walls moist and green with algae growth. “When the restoration work was sanctioned, temporary poles were also placed for at least two years, but nothing was done. Later, they were also removed,” added Habeebuddin.

He said, “The repair work of a portion of the building’s outer surface was done, remaining was stopped due to lack of funds. Now, one can observe the walls crumbling and the damaged plaster getting washed away. The government has to resume the restoration work as the earliest.”

Mohammed Ahmed, vice-president TDP Minority Cell, said, “With no funding for building maintenance by the government. The historic structure and one of the oldest colleges in the city lies neglected. The TRS government is developing the city but neglecting the Old City. There are several such heritage structures including the City College, Chowmahalla Palace, Shalibanda Clock Tower, which are neglected and crumbling due to lack of repair and maintenance work,” he added. #KhabarLive #hydnews