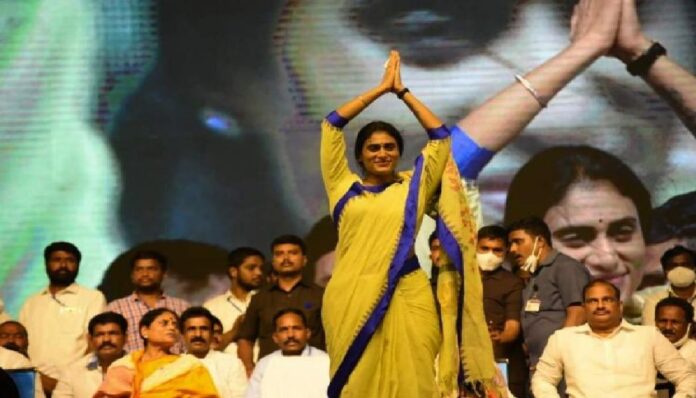 The lady icon,YS Sharmila’s upcoming political party in Telangana would be the first of its kind in south India.

So far, the Telangana region has been ruled by only one woman — Rudramadevi — of the 13th century in known history. Historical evidence shows that she ruled the region from 1263 -1289. Now suddenly, from an unexpected corner, YS Sharmila, the daughter of YS Rajasekhara Reddy and Vijayamma, seems to have a serious chance at claiming that place. Historically, Reddys are also Shudras just like the Kakatiya rulers.

The Kakatiya dynasty witnessed many ups and downs when they ruled this region. The Kakatiyas rulers were known for their love of agrarian economics. The Ramappa and Pakal lakes as well as the plough and bull symbols that they adopted clearly show their agenda was influenced by agricultural development. During this time, a major tank and agricultural well-irrigation system also came into operation in the dry region.

Though they built few Shiva temples, agriculture was their main focus. Those who visit Ramappa and Pakal lakes, which still irrigate thousands of acres of lands, are a clear indication. As someone who has drunk the water from Pakal Lake and eaten the rice produced in my area, including in my own village, it offers definitive clues to their vision of irrigation technology and development. After Rudramadevi was killed by her Kayastha senadhipathi, Ambadeva, in 1289, no woman became a ruler after her.

Adivasi rulers Sammakka-Sarakka, who ruled within the Koya forest belt, were martyred by Rudramadevi’s grandson, Pratarpudra. They were great women symbols of Telangana, and the Sammakka-Sarakka jatara, which symbolises the duos’ significance, is worshipped and celebrated by Adivasis.

Sharmila, even before launching her party, has made an impact. The sight of her torn jacket at the April 15 dharna became a showcase of her fighting shoulder for police culpability. The more such mistakes the TRS commits, the more she will pick up the dust.

She has shown confidence of a leader by telling the Telangana people that someday, ‘I am going to be the CM of Telangana’. But it all depends on what kind of welfare agenda that she will evolve, which could put the TRS welfare schemes in poor light.

The Congress and BJP as national parties cannot evolve regionally transformative welfare schemes which their Delhi masters do not accept. One such major welfare agenda in Telangana that Sharmila should project is the need to convert all government schools into English medium education, while promising the mothers that their accounts will get what I call Badi Bandu (school friend) scheme to the tune of Rs 15,000 to 20,000 per year.

Additionally, there could be full reimbursement of college fees and implementation of Arogyasree as her father did. The government schools that the TRS has left dilapidated should be turned into modern institutions.

The existing Rytu Bandhu has helped high-end rich farmers rather than small, medium and tenant farmers. A creative and workable restructuring is needed. Some water schemes have been implemented, no doubt, but a more pruned irrigation scheme has to be worked out. This is where existing schemes need to be assessed for their good parts and bad. And the new aspects, which the Congress and BJP parties cannot promise, need to be considered.

School, college and university systems of Telangana also need to be rehauled. As of now, that whole sector has been deliberately killed to suit Telangana’s old feudal vision — more serious education, more emergence of quality citizenry that opposes feudal practice and lifestyle at every level. Hence, KCR has killed education systematically. More English educated graduates are demanding good jobs. Killing the school, college and university education systems guarantees more power for his English-educated son and daughter, KTR and Kavitha. Incidentally, Sharmila communicates as a leader in English and Telugu as Ayyachaatu (father promoted) son-daughter leaders can do. Sharmila is an Ayyaleni (daughter of deceased YSR) bidda and is establishing a party on her own.

She has also moved deep into Telangana during her padayatra after the tragic death of her father, more so than the present Bathukamma-playing daughter and Chirragone (rural cricket)-playing son. She entered the game by playing politics, not Bathukamma or Chirragone. That is a powerful message for those Telangana Vaadis, who have managed to buy their Innova cars and leave their motorbikes behind within just seven years.

KCR knows that the people around him have not made any sacrifices for Telanagna, except make money and even still, he promoted them. Like a British monarch, he appears once in a while in public meetings or press conferences and withdraws into the newly-built government palace (Pragati Bhavan), not working on a daily basis as CM from the office. Sharmila has to evolve a different culture of ‘I love my activists as I love myself’, a moral principle that feudal casteism hates. She has to work constantly on the political chessboard.

It should be taken for granted that she has an uphill task ahead of her. But given her family history, she could be able to climb that hill. What is required is tenacity, fighting spirit and an emotional attachment to the welfare of the Telangana people. It does not matter which hospital she was born in — Telangana or Andhra or Delhi or even in New York — once she has the right to vote here. #KhabarLive #hydnews