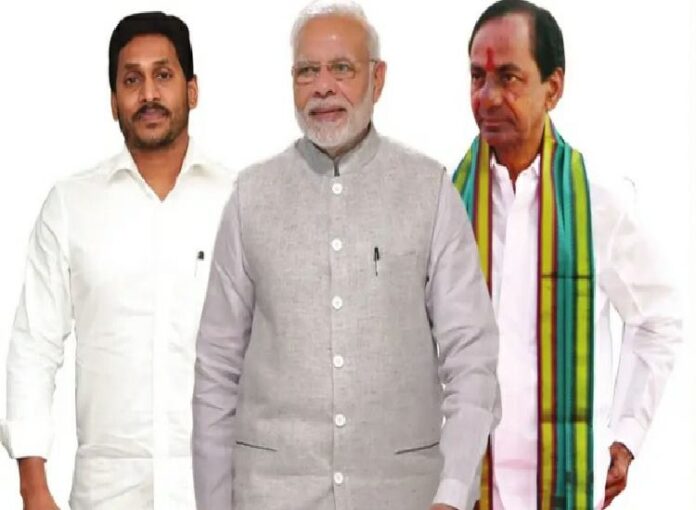 Regional parties, notwithstanding their influence at the state level and beyond, can sustain themselves only by consciously being on friendly terms with the ruling dispensation at the Centre.

No wonder, the Chief Ministers of Andhra Pradesh and Telangana, YS Jaganmohan Reddy and K Chandrasekhar Rao respectively, are following this unwritten national code in their respective states.  Both are trying to be on the same page with the Narendra Modi government at the Centre, which has become very powerful by building on BJP’s brute majority in the Lok Sabha.

The Bharatiya Janata Party, which is heading the NDA government at the Centre, has been boasting that its huge majority comes three and a half decades after Rajiv Gandhi bagged 400-plus seats in the Lok Sabha.  Rajiv’s score may have been due to the sympathy wave in favour of the Congress party in the aftermath of his mother Indira Gandhi’s assassination just two months before the advanced General Election.  It is now clear for non-BJP parties that clashing with the Union government would be futile since Prime Minister Narendra Modi has become the ‘Bahubali ‘ of Indian politics.

In Telangana, despite brushing aside rumours of possible anointment of IT Minister K T Rama Rao as the new boss of state’s administration, Chief Minister K. Chandrasekhar Rao might be looking for an opportune moment for the eventual coronation. Since his government is facing the heat from various sections of society, KTR may have decided to continue in the present post for some more time.  Congress and BJP are struggling to establish their presence in TS by exposing the omissions and commissions of the TRS government.

Further, the political situation in the country presents a scenario whether there is room for a political force involving non-Congress and non-BJP parties. The presence of such a third force might weaken anti-BJP combine. Hence, other political parties are keeping themselves away from attempts to form a Third Front of the kind envisaged by KCR, who too has occasionally flexed his muscles in this regard. So, KCR appears to have shelved his idea of bringing like-minded regional parties on one political platform. His idea is to replicate what his political guru and TDP founder NT Rama Rao did in the late eighties that saw the unfolding of the National Front. But the present political atmosphere in the country is not conducive for him. The present situation has compelled him to redraw his political plans, including the one to make KTR his successor.

The BJP TS unit, with the support of its national leadership, has been expanding its base in Telangana with the target of assuming power in the 2023 General Election. KCR has to run the show on the strength of his own image and return to power. But BJP national leadership’s ‘NOC’ might strengthen KTR’s future role in state’s politics.

So, a give and take policy may work for TRS and BJP in the future. BJP will be completing 10 years of its rule; so, anti incumbency factor could be there. In such circumstances, BJP might not get a huge majority in the Lok Sabha and such a situation would force BJP to go with an ‘inclusive policy ‘ that would bring more parties like TRS and YSRCP into the fold of National Democratic Alliance (NDA).

Well-settled regional parties like TRS and YSRCP will actually be looking for such a political situation that gives them leeway to ‘effectively deal’ with the Union government.  So, TRS and YSRCP are trying to impress the Modi government by supporting the farm laws, against which thousands of farmers have been agitating for over three months.

In Andhra Pradesh, Chief Minister YS Jaganmohan Reddy has shown a soft corner for the Union government led by Modi. Jagan is currently out on bail, though he is facing several cases filed against him by CBI & ED. The situation will be unimaginable if his bail gets cancelled by the CBI court.

Therefore, Jagan is monitoring developments in Tamil Nadu, where the Modi government is trying to gain an upper hand in government affairs, particularly after the demise of J. Jayalalithaa.  The Jagan government is also running for cover in the backdrop of the move to pivatise Vizag Steel Plant, which was achieved following an agitation and after the supreme sacrifice of 32 persons almost five decades ago.

Jagan preferred to write a letter to Prime Minister Modi requesting him to drop the privatisation move. Everybody can guess the fate of the letter! The YSRCP government is red-faced because of the Modi government’s firm decision on Vizag Steel Plant. People are asking about thousands of acres of land that was given by farmers then. Those lands, worth more than one lakh crore rupees, will go into the hands of private firms. The entire issue becomes even more complicated if one considers the fact that Vizag is going to become the executive capital of AP under the three-capital formula of Jaganmohan Reddy.

YSRCP is seriously thinking of keeping its principal political rival — TDP — away from the BJP government at Centre. TDP supremo Chandrababu Naidu has conceded that it was not right on his part to leave the NDA after the last elections. Since then he has maintained silence, while keeping himself away from anti- Modi rant at the national level. He appears to be desperate to forge an alliance again with Modi for the next elections as TDP thinks that it cannot take on YSRCP by going alone in the state.