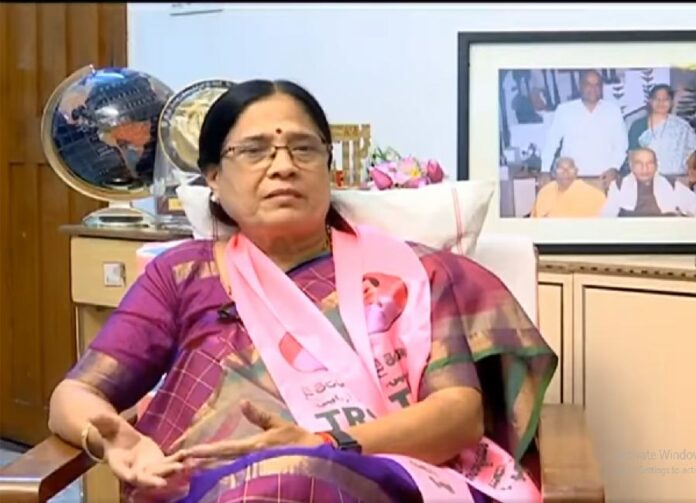 According to them, the strategy of the TRS leadership is likely to backfire on them for the simple reason that KCR and his family members are focussing too much on her Brahmin background, rather than her eligibility for the post.

The TRS leaders have been extensively campaigning that Vani Devi is an educated Brahmin woman and the party has shown its respect towards Brahmin community by fielding her in the MLC elections in the Hyderabad-Ranga Reddy-Mahbubnagar graduates’ constituency.

KCR’s daughter Kalvakuntla Kavitha said the fact that Vani Devi had been chosen for the MLC seat showed the kind of respect KCR had towards Brahmin community.

Vani, as she is popularly known in her home state, largely remained aloof from active politics even though her father was the country’s first prime minister from outside the Nehru-Gandhi family. Of Rao’s three sons and five daughters, only Ranga Rao and Rajeswara Rao took to politics.

Ranga Rao was a legislator and minister while Rajeswara Rao served as a Lok Sabha member. The eldest of the five daughters in the family, Vani is an artist, social activist and founder principal of Sri Venkateswara Group of Institutions which runs fine arts, pharmacy colleges and a school in the state capital.

She was named TRS candidate in the last minute. The choice comes in the backdrop of attempts by the TRS government to claim the legacy of P.V. Narasimha Rao by announcing his year-long centenary celebrations and passing a resolution in the state assembly urging the Centre to honour the Telangana’s “muddu bidda” with the Bharat Ratna, the highest civilian award.

Reports in the media suggested that KCR plans to send Vani to the council through the governor’s quota or any ‘safe’ seat.

The move is seen as a bid by KCR to stem the rise of the Bharatiya Janata Party (BJP) on his home turf by rekindling regional sentiment with the help of PV’s legacy.

But #KhabarLive spoke to AIMIM (All India Majlis-e-Ittehadul Muslimeen) MLC and analyst Syed Amin Jafri and RSS ideologue Raka Sudhakar and both felt TRS will not be successful with their respective supporter bases by using P.V. Narasimha Rao’s legacy.

After winning the Dubbak assembly segment in the by-election and making inroads with the elections to the Greater Hyderabad Municipal Corporation (GHMC), the saffron party is determined to challenge the authority of KCR in the upcoming MLC elections for the two graduate constituencies due on March 14 and the by-election in Nagarjuna Sagar assembly constituency, elections to Khammam and Warangal municipal corporations and three other major municipalities in Telangana.

Kavita held a meeting with representatives of 53 Brahmin community groups under the leadership of Brahmin Parishad, where she sought their support to Vani Devi. She assured that the government would solve all their issues.

It is obvious that KCR is targeting the defeat of sitting MLC N Ramachandra Rao of BJP, who is also a Brahmin. The TRS leadership thought the Brahmins, who constitute a large chunk of the graduate voters would have sympathy towards her and P V Narasimha Rao.

By openly taking up the cause of Brahmins, KCR would be losing the support of other communities, including minorities, SCs, STs and OBCs. In fact, the BJP candidate never disclosed his Brahmin identify and won the elections last time.

“So, the focus on Brahmin identity of Vani will not help us and in fact, it might prove counterproductive,” the analyst said.