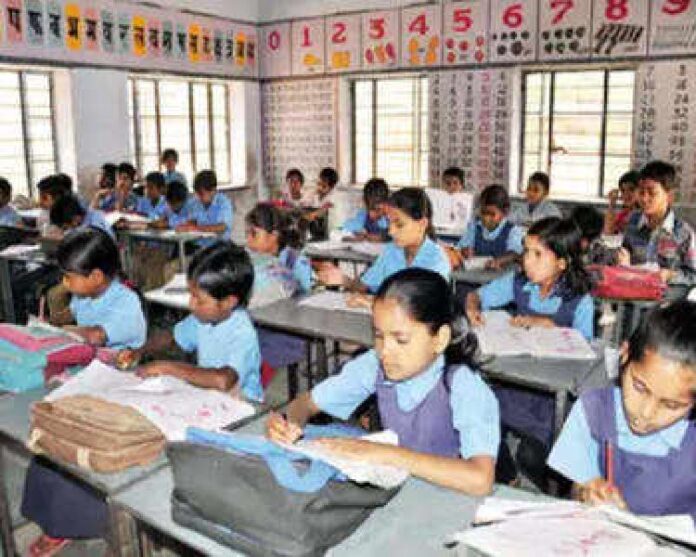 A steep increase of 40% jump compared to previous academic year of 2020-2021, when around 89,000 private school students moved to govt schools. This time the flow is heavy due to the ‘dues and new fees’ issue and government considerations for new students.

‘These shift not due to trust in govt schools, but helplessness’

About 1.25 lakh students from private schools in Telangana have shifted to the state’s government schools for the 2021-22 academic year — a 40 per cent jump compared to the previous academic year ending 2021.

The rise in such admissions, which the state education department has dubbed ‘reverse migration’, is mostly being attributed to parents being unable to pay private school fees owing to job losses and financial hurdles.

“This has to be by far the highest number — 1.25 lakh students from across all the classes (Class 1 to Class 12) have taken admissions in government schools. They shifted from private schools,” a senior Education Department official told #KhabarLive on condition of anonymity.

“While we cannot say there is only one reason, in most cases, we saw parents saying that they were unable to afford the school fees anymore due to their depreciating financial condition,” the official added.

“This does not include the residential, social welfare schools. This count is purely from the government day schools in the state.”

According to the official, around 85,000 private school students moved to government schools in 2020, which was at least a 40 per cent rise from the previous 2019-2020 academic year. The official added that in the pre-pandemic era, the jump was not so high every year.

“If we look at 2018 and years preceding it, the number of such students taking admissions was very low, maybe 50 per cent lower. Even the jump every year was not so high, barely 10-15 per cent,” he said.
#KhabarLive reached Telangana Director of School Education, Devasena, via calls and texts but there was no response till the time of publishing this report.

The Telangana government, in line with the Centre’s guidelines, had issued orders for schools to reopen, with appropriate Covid precautions, from 1 September. The High Court, in response to a petition, then ruled that no school must ‘force’ parents to send students to schools, if a majority of them want online classes, the schools must oblige.

The resumption meant that the schools reopened after being shut for almost a year-and-a-half. An attempt to reopen them in March turned futile after more than 100 children, across the state, tested positive.

But the surge in admissions is already affecting state-owned schools.

The Government Girls High School Mahboobia, one of the oldest in Hyderabad, had 110 new admissions for the academic year for Classes 6 to 10.

According to the school in-charge, G. Neeraja, around 70 per cent of them are students from private schools. The new admissions have pushed the school’s strength to 410 with just about 17 teachers to handle them.

“We usually get about 20 new admissions from private schools every year, but this year it was too high,” Neeraja told #KhabarLive.

“We asked almost every parent why they are moving their children to the government schools from well-set private institutions. Their reply was that they were not able to afford the fees.”

When #KhabarLive visited the school, there was Mahesh. S, a private school teacher who lost his job early January and had shifted both his children (Class 6 and Class 8) to the Government Girls High School.

“It has been more than six months since I last had a job; we are managing with my wife’s savings,” he said. “To continue their education in the private school, I have to pay at least first term fees and clear last year’s dues. This is coming up to Rs 1.2 lakh for both my kids; I cannot afford it. So, I moved them here.

“With great difficulty, I brought them a laptop last year,” Mahesh, who is now working as a driver, told #KhabarLive. “The school where I used to teach did not pay my salary for three months last year and asked me to leave one day.”

“Not all private schools have also reopened, so that uncertainty had also pushed parents to move children. Around 6,000 private school students moved to government schools this year. The position is such that in a few schools we are putting up a ‘no vacancy’ board,” District Education Officer NSS Prasad told #KhabarLive.

Another reason why students, especially in rural areas, have moved to government schools is lack of transport to private schools, said Venkat Reddy, convenor of M.V. Foundation, an independent organisation working for children rights to education.

“Private schools have stopped running their buses, and that became an issue for rural students. So, they moved to nearby government schools. Not everyone has their own transport in villages,” Reddy said.

Although the Telangana government issued orders in 2020 and 2021 to not increase school fees and only collect tuition fees on a monthly basis until further orders, many parents allege that the schools have been collecting full fees or at least term fees.

Another reason why the ‘reverse migration’ figure shot up this year was students were asked to clear last year’s dues before they could continue with the current academic year.

Hyderabad Schools Parents Association, an independent body with parents of mostly private school students, for long has been complaining to the state government over private schools forcing parents to pay fees.

Although the high number of students jumping to government schools sets a positive tone for the state-run institutions, the shift is not because the government schools have improved or set a benchmark but because of the helplessness of the parents, said Chava Ravi, general secretary of Telangana State United Teachers Federation.

He added that it would be difficult to expect the number of students who moved to sustain in the government schools, owing to the poor infrastructure and lack of faculty.

“To sustain those students, government institutions have to build confidence in parents. But are they in a position to do that? There are about 20,000 teacher posts vacant in government schools in the state,” Ravi claimed.

“The usual teacher to student ratio as per the Right to Education Act (RTE) should be 1:30 but that is not the situation in Telangana.”

Reddy from MV Foundation said that in several rural areas, government school teachers going door to door asking parents to send children to their schools, including those studying in private, might have also had an impact.
“Now the challenge is to build that confidence that government schools are decent. It will be hard for the students to adjust; teachers will have a great role to play now,” Reddy said.

Meanwhile, in just two weeks of schools reopening, which again is not to full capacity, at least 20 students reportedly tested positive in just the first week. At least five teachers also tested positive across the state. #KhabarLive #hydnews