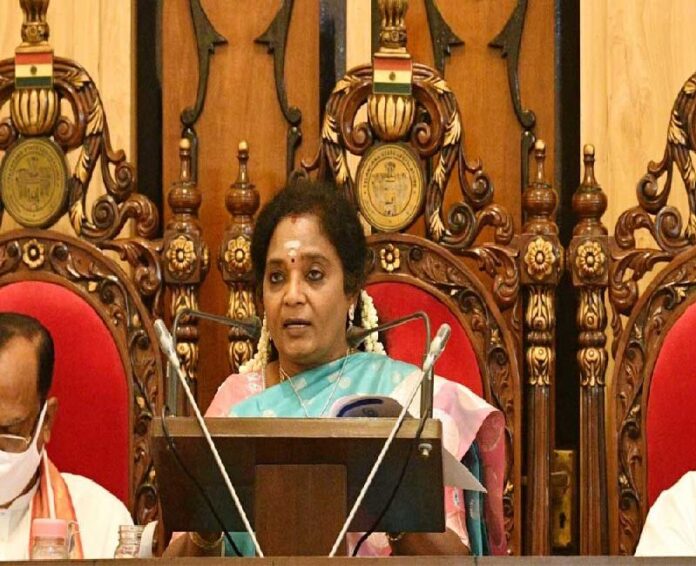 Telangana state stands numero uno in the country on developments and welfare schemes despite several hurdles and setbacks.

Telangana State is forging ahead in development and welfare on the strength of its several innovative schemes. It proved its mettle by entering into yet another financial year with self-confidence despite the economic recession of 2019-20 and adverse impact on State finances due to Covid-19 pandemic, said Governor Tamilisai Soundararajan here.

Addressing the budget joint session 2021 of Telangana Legislative Assembly and Council, the Governor asserted, “This development and Welfare Yagna will continue and many more steps will be taken with humanitarian perspective to ensure fruits of progress will reach the downtrodden on a priority basis. My government is rededicating itself to achieve this objective”.

In a 40-page address that lasted one hour 15 minutes, Governor traced the impressive milestones achieved by the State under the leadership of Chief Minister K Chandrasekhar Rao in several sectors since its formation into a separate State and substantiated them by laurels it won from Central and international agencies.

The State became a torch-bearer to the entire country in many sectors including in tackling the dreaded Corona virus. Citing the Country’s Economic Survey report, Governor said the State stood topmost in curtailing the spread of pandemic, deaths due to virus, conducting a greater number of tests and ensuing fast economic recovery.

From a state of backwardness that prevailed in all sectors in the region in the undivided State, Telangana reached the present stage thanks to thousands of hours of brainstorming and endeavouring for six and a half years. “End to end planning and perfect execution made it possible for the rise of Telangana State to the third position in Sustainable Development Goals India index declared by UNO. Success is half achieved when one has a good plan,” Dr Soundararajan said.

Substantiating the strides achieved in various sectors, from agriculture, health to Industry and infrastructure, she highlighted that the State overcame the power crisis and now emerged as the State providing 24-hour free power supply to the farm sector and uninterrupted power to all sectors.

Its installed power capacity at the time of formation of State was only 7,778 MW and now it is 16,245 MW, the then per capita power consumption was 1,110 units and now it is 2,071 units and higher than the national average of 1,208 units. The solar power generation touched 4,840 MW from 71 MW. The works on Yadadri, Bhadradri power plants were being completed on the fast track to making Telangana a power surplus State. The Central Electricity Authority acknowledged the success of Telangana in the power sector.

Mission Bhagiratha gave a permanent solution to the drinking water problem as the State spent Rs.32,500 crore in over six years to provide protected drinking water to each of over 57.26 lakh households with tap connections with 37,002 overhead reservoirs. Importantly State has been declared fluoride-free by the Central government department of Drinking Water and Sanitation, she said in her address.

Under Mission Kakatiya, 45,000 tanks were revived and the groundwater table increased by 91 per cent in 498 wells as per data released by the Centre on groundwater levels. Apart from helping agriculture, the tanks gave a push to biodiversity and fishermen were earning profits now.

The Governor made a detailed mention of the irrigation sector with various projects and said “My government re-designed the projects to suit to the needs of the State. Inter-State disputes were solved amicably and Kaleshwaram, Palamuru-Ranga Reddy, Dindi and Sitarama Lift Irrigation projects were on verge of completion. The storage capacity of reservoirs on the Godavari River is 227.7 tmc while united rulers proposed 11.43 tmcft. Overall reservoirs including those on Krishna River with a total capacity of 342 tmc has been planned after 2014,” she said.

The agriculture sector had seen a sea change with free power, quality inputs, Rythu Badhu scheme to give Rs.10,000 per acre for two crops as investment subsidy, Rythu Bhima to give Rs.5 lakh to the family of the deceased farmer as the government believed that ‘the Telangana livelihood is in agriculture”.

The Governor highlighted the changing face of villages with all basic amenities under the New Panchayat Raj Act and Palle Pragathi scheme with a monthly release of Rs.308 crore funds. The State became an open defecation-free State. Through new Municipal Act reforms, the number of municipal corporations and municipalities were increased in tune with urbanization.  An amount of Rs.148 crore was released to 129 municipalities a month to help them financially and TS-bPASS Act reforms were brought in building permissions.

The Governor said the new Revenue Act brought in revolutionary changes in land administration and the Dharani portal helped in transparency in the land record management and removed the discretion of officials and eliminated corruption. Registration and mutation based on Dharani became speedy in the sale, purchase and alienation of agriculture lands. #KhabarLive #hydnews