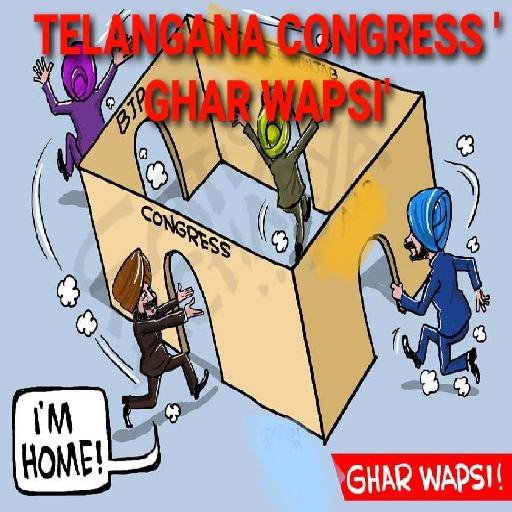 Many Congress leaders, cadre scattered in different parties are joining back or Ghar wapsi to the party according to reliable sources. Apart from this, many flocking back from TRS, BJP and AIMIM.

This is after the A Revanth Reddy’s elevation as TPCC chief, the moribund Congress unit in the state has attained the critical mass, with some of the turncoat Congress leaders set to make ghar vapsi and some of the former TDP leaders now in Telangana Rashtra Samithi (TRS) and Bharatiya Janata Party (BJP) are inclined to join the grand old party. The bottom line: political equations are changing
rapidly.

Those who had left the Congress during its crisis in the past and joined the pink party and the saffron party are now thinking about ghar vapsi (homecoming). Besides, former Telugu Desam Party leaders who had worked closely with Revanth as colleagues are also planning to join the Congress. There is a catch in this. If former Telugu Desam Party leaders join the Congress, the larger question is: Will it help strengthen the party or lead to exit of ‘original Congress’ leaders?

There are allegations and criticism that TDP supremo Chandrababu Naidu had brought pressure on the Congress high command to appoint Revanth Reddy as TPCC president and hence the TPCC, for all practical purposes, has become Telugu Congress.

Renuka Chowdary, who had switched to Congress from Telugu Desam Party long back, has differences with Mallu Bhatti Vikramarka in the district politics. Meanwhile, some Congress leaders who had left the party are likely to come back to the party.

Meanwhile, Quthbullapur former Congress MLA Kuna Srisailam Goud recently joined BJP. After the appointment of Revanth Reddy as TPCC president, Srisailam Goud has been thinking of joining the Congress as Revanth is his buddy. In the same way, in the erstwhile Nalgonda district Vaddepali Ravi, a famous doctor in the Thungathurthy Assembly constituency, who had contested unsuccessfully as the Congress candidate from the seat, recently joined the TRS. But Ravi is unhappy in TRS as he is not getting importance. He is now planning to come back to the Congress.

The leaders joined the AIMIM like Khaja Bilal, Mohammad Ghouse and many such persons too planned for Ghar Wapsi , according to informed sources.

This entire change will give the boost and encoto the ailing Congress in Telangana.  It really works or not, the time will decide, let’s wait and see. #KhabarLive #hydnews