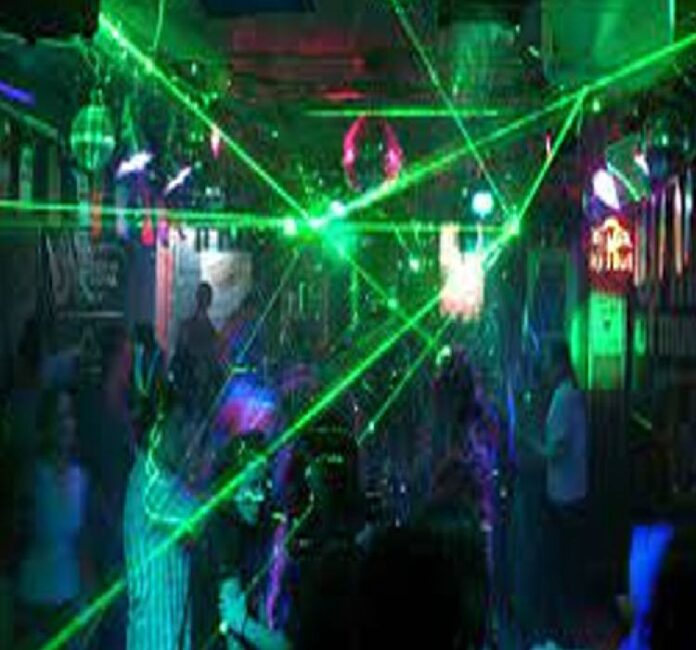 The ‘Glow parties’ are becoming a new craze for Hyderabad younger generation and corporate hunkies. The pubs, clubs are making huge money with this type of parties on weekends and holidays.

These are one of the latest ways for young people to get out, cut loose and enjoy a good time. They’re especially popular among teenagers, with high school students across the nation hosting and attending these types of events.

In many cases, glow parties are ticketed events, where guests are required to purchase their admission to the party, and the money raised through ticket sales goes to pay for the elaborate decorations found at a typical glow party. Usually, a glow party will take place at a large venue such as a vacant warehouse, where powerful sound systems are set up to pump the music out while the party goers dance to the rhythm.

In theory, glow parties are supposed to be a safe place for high school students to have fun with their friends. They are typically promoted as being alcohol free, making them an attractive alternative in the eyes of parents worried about letting their children attend parties where they could get into bad situations by drinking. More and more, however, word is getting out that glow parties might not be that safe after all.

What really goes on at a glow party?

They get their name from the fact that most attendees spend a substantial portion of their time at the event carrying glow sticks around, waving them around in the air, creating a surreal environment in the darkened space. For many of the attendees, however, this sensory experience isn’t enough.

They augment their experience by using powerful drugs such as MDMA, more commonly known either as ecstasy or Molly.

MDMA has long been associated with the club scene and has been a fixture at raves and dance parties for more than a quarter-century. It is not surprising to find that it has made its way into the glow party scene, given the strong similarity between that type of party and the raves when have been so popular for so long.

While it shouldn’t be assumed that all glow parties are drug dens, at the same time it should be noted that many such events are promoted as having on-site medical personnel who are ready to treat partygoers who suffer from overdose, a clear sign that a large percentage of those involved in hosting and attending glow parties know exactly what they’re getting into.

Another major risk associated with allowing your children to attend a glow party is that they are a ripe target for sexual predators. Such people may see in glow parties an ideal opportunity to take advantage of young women who are vulnerable in the dark, surrounded by strangers and potentially under the influence of drugs such as ecstasy, which are designed to create a false sense of euphoria and loss of inhibition. Glow parties may be billed as a safe and fun way for your children to spend an evening, but in practice, they are often found to be anything but that.

Young people who attend such parties are likely to be offered drugs, and when they are they may feel an overwhelming sense of peer pressure to just go with the flow and be part of the scene. Just as bad, there is a possibility that they will be slipped drugs in a drink or food, unwittingly getting high and later suffering the consequences.

It might not make you popular with your children or cool in their friends’ eyes, but it is very much in their best interests to tell them “No” when they ask to go to a glow party. The party they want to go to might be safe, but it might not, and it would be better for you to not have to find out the hard way.

Hyderabad, which in recent times has grown to be a bustling smart city peppered with pubs, bars and clubs, is preferred by Gen Y as a destination city. These recreation centres are slowly becoming hubs for drugs.

Officials say that it was time for greater and regular monitoring of the activities in the pubs and bars in the city, the use of drugs mainly ganja and LSD (Lysergic Acid Diethylamide ) and MDML (Methylenedioxy-Methamphetamine) and other narcotic drugs like heroin are rampant in the name of nightlife.

The recent regular seizure of the ganja, which was being smuggled from the neighbouring Andhra Pradesh, has established the fact of increasing use of cannabis in the recreation centres during the late-night parties.

“A strong network of ganja supply has been established by some groups in the city and make the substance available to the youth at many places, including the pubs which are opened in the posh colonies like Banjara Hills, Jubilee Hills and Hi-tech city,” a senior official of the state Directorate of Enforcement in the State Excise and Prohibition department revealed to #KhabarLive.

After Chief Minister K Chandrasekhar Rao instructed the officials to come out with an action plan to free the State from the drug menace, the Excise officials have paid special attention to the pubs and bars and the services provided to the visitors particularly the youth in the centres.

“The use of hookahs are common in many pubs. Some of them sell the permitted tobacco flavours. After the ganja seizure cases increased, the use of cannabis is picking up in the pubs located particularly in HiTech city where the people from different parts of the country were staying,” he said.

Officials said that youth considered the pubs and bars to be safe places to consume drugs as there is no such strong surveillance to monitor the activities inside the recreation centres.

“Most of them were operating the activities in the dimly lit premises. Though CCTVs are installed, it is difficult to probe the drug use unless the officials conduct raids physically,” the official said. The officials also admitted that the pubs have gone scot-free for the last four years. The police and Excise conducted a series of raids in 2017 when the police busted links between Tollywood and drug mafia in the city.

At that time, more than 10 pubs were served notices and a few have been closed for indulging in illegal activities mainly the supply of drugs. “There was no vigil on pubs and also no action against the pubs which were involved in the illegal activities in the last four years,” said a source.

The major challenge before the government to curb drug use is the drug peddlers particularly from the African countries who have adopted new modus operandi in supplying drugs to the youth. Enforcement officials said that it has become difficult to trace the peddlers in view of the extensive use of advanced technology on their smartphone. “Now, the government is ready to bust the drug mafia by taking up special measures.

Some stringent rules will be introduced to run the pubs during nights with some special security measures. Police and Excise officials will come out with a new strategy jointly to end the drug menace in the pubs,” said another official.