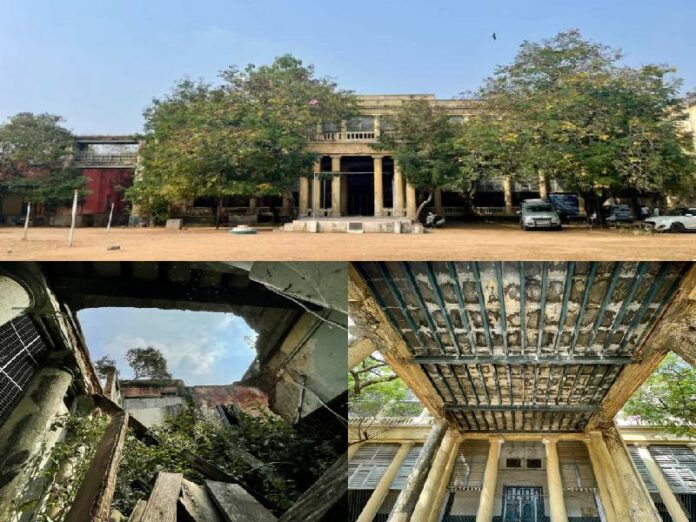 The school for former Nizam’s royal children is set to be razed to make for a new building. The old building now called Aliya High School for Boys is in shambles.

This school building has been abandoned in stages and only the library, Principal’s chamber and laboratory are functioning from the continental-style heritage building in Hyderabad.

“There have been a lot of rumours about a new building from the time parts of it were abandoned. But a few weeks ago, officials came and measured the building confirming our fears that this building will be demolished,” said a teachers’ union official when asked about the development. Every year, the school gets a notice from the Greater Hyderabad Municipal Corporation about the building’s stability. Two years ago, the high ceiling in the right wing of the building collapsed in a heap after the timber rafters gave way.

“The building is strong. It’s built with granite blocks. The walls are nearly three-foot wide. Yes it is leaking in places, but that can be hopefully fixed easily. The new building can be built around this,” says Fareesa Asma, principal of the school, unsure about the fate of the building.

Built at the turn of the 19th century with a mix of stone, bricks, steel and reinforced concrete it has Jack arch roof held up by massive steel girders. Now there is vegetal growth between the rocks and the fissures in the steel and concrete structure. The lack of maintenance, leakages and vegetal growth led to a situation where the rusting steel trusses are on the verge of collapse. The building is a listed Grade III heritage structure.

“In conservation terms, the building’s condition is fair. It is not going to collapse anytime soon. It is structurally stable. Instead of demolishing the building, a new building can be constructed close by while carrying out conservation work on the heritage building,” says a heritage activist.

An archival map with the school authorities shows that it was spread over 25 acres. “There was no road. This whole area was an educational complex that developed from this kernel,” says a school official showing the map. The Madrasa-i-Aaliya has a storied past whose students included the Nizam Osman Ali Khan, Maharaja Kishen Pershad, Pakistani cricketer Asif Iqbal as well as well as the author Raja Rao who spent 10 years between 1915 and 1925.

Students and parents are demanding to renovate this heritage structure to safe the education of thier wards. #KhabarLive #hydnews