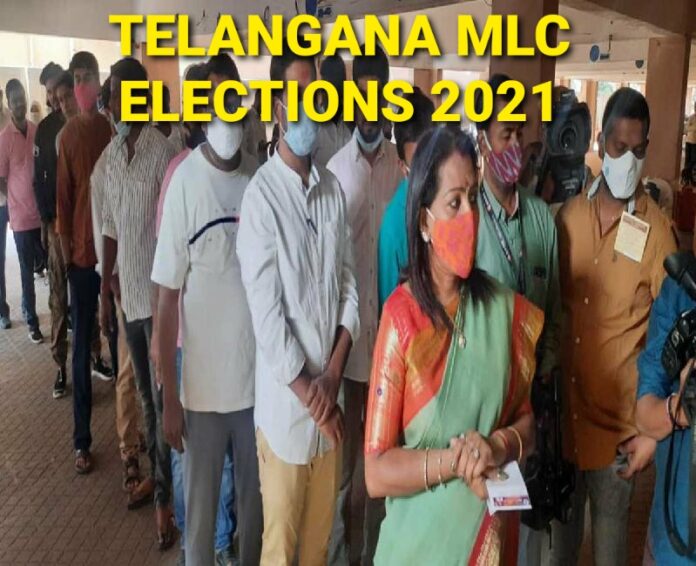 As expected, the holiday mood grafuate voters in urban areas are lazy to flock to polling station to cast their votes. As a result  the low polling recorded in early hours.

The enthusiastic political leaders and their followers plunge into action and demonstrated the art of casting votes. High profile celebrities, leaders, business barons and icons already cast their votes in early hours of polling.

Let’s wait and see the percentage of polling to record, and #KhabarLive will feature all interesting happenings in this polling and after in a series of updates.

As many as 93 candidates are contesting from the Mahabubnagar-Rangareddy-Hyderabad constituency while 71 nominees are in the fray from the Warangal-Khammam-Nalgonda constituency. Meanwhile, jumbo-sized ballot boxes and large ballot papers have been readied for the polling in view of a large number of candidates in the fray.

The campaigning for the election from the two Graduates’ constituencies witnessed a war of words between the ruling TRS and opposition BJP and Congress.

Against the backdrop of unexpected setbacks in the Dubbaka Assembly seat bye-poll and Hyderabad civic polls late last year, the ruling TRS made a determined bid to win the two Council seats and deployed state ministers, MPs and other leaders for the campaign.

TRS Working President and state minister KT Rama Rao, who spearheaded the TRS’ campaign, attacked the BJP over the NDA government allegedly not implementing the promises made to Telangana at the time of bifurcation of undivided Andhra Pradesh and allegedly not providing two crore jobs in the country every year, as promised.

The BJP, meanwhile, sought to corner the ruling TRS for allegedly neglecting the education sector and not providing jobs, among others.

The Mahabubnagar-Rangareddy-Hyderabad constituency is witnessing a keen contest as former minister G Chinna Reddy (Congress), TDP’s Telangana unit president L Ramana and former MLC K Nageshwar, a prominent analyst, and others are also in the fray.

The TRS fielded sitting MLC Palla Rajeshwar Reddy from Warangal-Khammam-Nalgonda Graduates’ constituency while the BJP candidate is G Premender Reddy. Telangana Jana Samiti (TJS) leader M Kodandaram is in the fray from the constituency. The counting of votes would be taken up on March 17. #KhabarLive #hydnews