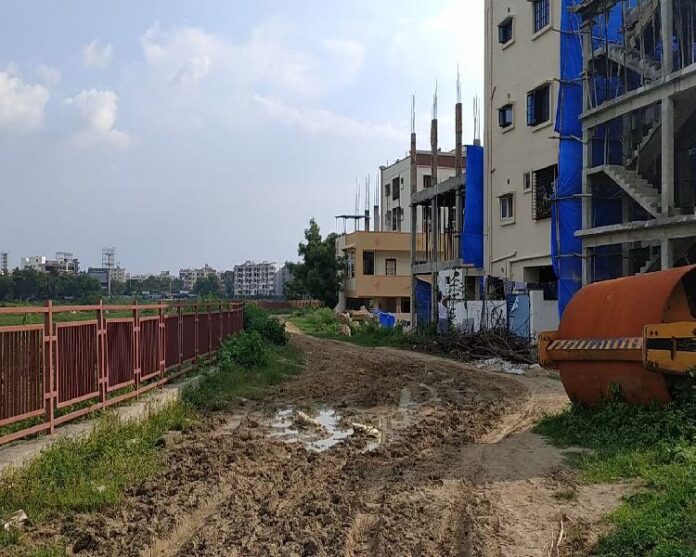 The unending troubles made Miyapur Lake area residents frustrated with several pleas and complaints to civic authorities despite the severe problem is not solved yet. This is a sheer example of negligence and official apathy.

For many in Hyderabad, evening is a time to relax on the verandah after a long day while for kids, it is a time to play with friends outside their homes. However, such joy eludes Krushinagar residents living near the Miyapur Patel Cheruvu (Lake), who lock themselves in their houses around 6pm, light up a mosquito coil and remain cooped in for the rest of the evening.

All the hassle because sewarage pipes have outlets just outside residents’ homes, which has increased mosquitoes in the area, not to mention the terrible stench. Many have seen snakes and rats in the area.

The Greater Hyderabad Municipal Corporation (GHMC) had laid pipes last year as part of a project to clean the lake. But the work was abandoned midway.

Once covered with water, the lake is now overgrown with hyacinth and other weeds.

Pochaiya, a coolie who lives along the boundary of the lake in the Krushinagar area of the Rangareddy district, says such has been the condition for over three years.

“Last year, they installed drainage pipes and box drains to prevent sewage water from being discharged into the lake. The lake was supposed to get cleaned and a park was planned, but nothing happened. Without a proper outlet, these pipes discharge dirty sewage water outside my house. The smell gets unbearable sometimes.”

The Miyapur Patel Cheruvu is heavily polluted because of the discharge of drainage water. A report from 2020 explains that originally, four nullahs were to connect Patel Cheruvu and the Gangaram Pedda Cheruvu. However, due to encroachments over the years, these nullahs have narrowed, hence increasing overflowing the lakes. This has caused urban flooding.

In order to widen nullahs and divert drains, the GHMC is trying to acquire some properties in the way, As reported on 16 August. The GHMC is also developing minor irrigation infrastructure, a part of which is the beautification of lakes. Rs 12 crore was allotted for beautifying the Patel Cheruvu.

The situation worries not only those living on the banks of the lake, but those in residential apartment building at least 500-700 meters away, Piyush Kumar, a resident of ‘Lotus Avenues’ apartments near the lake tells me.

“They promise to clean the lake and even though they start on it, it is back to square one after a few days. The smell is unbearable and mosquitoes are aplenty. This time, they did make a road near the lake but the boundaries are still muddy. We were promised a walking track around the lake which has not been made as of yet, and now we can’t visit the road near the lake because of the mosquitoes.”

Last year in March, MLA of the area Arekapudi Gandhi was quoted by the media saying that a cycling and walking track will be built surrounding the lake. So far, only a fence has been and a temporary office has been made. Locals have also alleged that the office has not been operating since December last year.

When the disastrous Hyderabad floods hit in October 2020 due to heavy rain, the water in the lake overflowed and gushed into houses and areas nearby. Salma Begum’s house located on the boundary of the lake in the Krushinagar area was flooded with dirty water from the lake and sewage water from the pipes.

“Last year, the lake flooded and water was everywhere in my house. These open sewage pipes beside my house let water out on the road in front of my house. The water was dirty and stinking. My bedsheets and clothes are still stained with that dirty water. Almost a year since, and these pipes are still open. How will I manage if it rains like that again? No one deserves to live like this.”

Residents living near the lake are very uncertain about what will happen after the work finishes, or how the pipes will be moved.

Farhan, a college student who has been resident here for over 10 years, told me he was scared of living in the area. He fears that more sewage pipes will be laid, adding to residents’ miseries.

When #KhabarLive visited the office of GHMC Chandanagar Deputy Commissioner N Sudhamsh wasn’t available to answer the queries. His response to the email is awaited. Site engineer Mahesh informed that the work had stopped due to some legal issues and will hopefully resume soon. #KhabarLive #hydnews