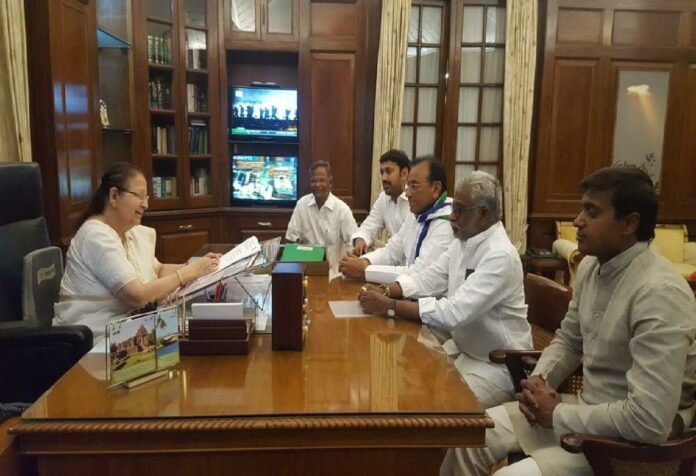 Andhra Pradesh politics is heating up with the acceptance of lok sabha members. The grim situation describes the vulnerablity of the rotten politics in the state.

The Lok Sabha Speaker accepted the resignations of YSR Congress MPs, thus, clearing the haziness on the issue that rocked Andhra Pradesh politics for a few weeks.

The YSR Congress Party describes resignations of its MPs as a saga of sacrifice in the service of the people. But, TDP, obviously, dismisses it as a mere political gimmickry and brushes aside the demand for resignation of its MPs too. There will not be any by-elections as per the Section 151A of the Representation of the People’s Act to the five seats vacated due to these resignations.

Questionable delay The Speaker’s questionable delay cannot be accidental. One cannot be oblivious to the possible political machinations behind avoiding by-elections as per law. This delayed decision of the Speaker gives credence to the criticism that the YSR Congress has a clandestine understanding with the BJP. In fact, there was more than one-and-a-half months time for the Speaker to accept the resignations so that the by elections could be held.

Section 151A
The Section 151A: Time limit for filling vacancies: a bye-election for filling any vacancy shall be held within a period of six months from the date of the occurrence of the vacancy: Provided that nothing contained in this section shall apply if: (a) the remainder of the term of a member in relation to a vacancy is less than one year.

In fact, the Speaker acted in such a way that the said section would operate and by-elections would not be held for the five seats vacated by the resignation of YSR Congress MPs.

Apex court verdict
The Speaker should have considered the apex court judgements to speedily act on the resignations. The Supreme Court in Election Commission of India Vs Bajrang Bahadur Sing (2015) said, “The question, therefore, is as to how to reconcile the two apparently conflicting constitutional obligations…(Para 69)”. The first one is the Speaker’s obligation to decide on the resignation submitted by the members. The second is the Election Commission’s obligation to hold the election within a period of six months from the date of occurrence of the vacancy.

Thus, the Supreme Court’s judgement clearly puts the obligation on the office of the august Constitutional institution, Speaker, to speedily decide on the resignation so that the Election Commission of India would be in a position to discharge its Constitutional obligation to hold the elections within a period of six months if the Lok Sabha seat falls vacant on the Speaker accepting the resignation. Thus, the Speaker’s delayed decision is a clear violation of the Representation of the People’s Act and the Supreme Court judgement in Bajrang Bahadur Sing case.

Political question
Why did the Speaker act so? There can be two possible explanations for this. Though, the office of Speaker is a politically neutral one, everyone knows that the reality is not so. Speakers and Governors act in the interests of the party they belonged to before occupying those august offices.

Therefore, it is not wrong to conclude that the ruling BJP wanted to avoid by-elections. The TDP allegation is that the YSR Congress has a clandestine deal with BJP. The delayed decision of the Speaker to avoid by-elections is therefore an illustration of this deal. This cannot be ruled out due to the suspicious political behaviour of YSR Congress towards BJP in the past too.

The third possible explanation is that the BJP does not want to give an advantage to its estranged ally, the TDP. The TDP has nothing to lose if by-elections are held. It has everything to gain. If the YSR Congress retains all the five seats, it does not send any message that would hurt TDP. But, if the YSR Congress loses any of them or wins with reduced margins, the TDP will have a political scoring point for 2019.

Therefore, the TDP will not hesitate for by-elections. Thus, the YSR Congress allegation that the TDP with its secret understanding with BJP ensured that the Speaker delayed decision is not convincing .

Jagan’s salvo
The YSR Congress wants the TDP also to seek the resignations of its MPs to send united message to the Centre. However, TDP maintains that resignations do not yield any advantage and its MPs would continue to fight while remaining in office. But, TDP which initially said that no-confidence motion is only a last resort, was compelled to first support YSR Congress motion and later moved its own motion. The TDP earlier disowned the demand for Special Status when the Centre offered Special Package in lieu of it. But, the party had to retreat and reiterate the Special Status demand as the opposition persisted on it.

The TDP has already exhausted its weapons like withdrawal of ministers from Modi ministry, snapping ties with BJP led NDA, declaring an all-out war on BJP and finally moving no-confidence motion. The party would subsequently launch campaign to tell the people how the BJP-led central government ditched Andhra Pradesh.

With the Speaker’s acceptance of resignations of its MPs, YSR Congress gets fresh ammunition to fire at TDP. This lands TDP in a Catch- 22 situation. If it also decides to seek the resignation of its MPs, it would only be following the action of YSR Congress. If not, YS Jaganmohan Reddy would continue his scathing attack on TDP that it is clinging to positions. This is precisely the tactics adopted by the TRS against the Congress during the Telangana movement and finally benefited from it.

The TDP was trailing in the race as it disowned Special Status for Special Package. But, Chandrababu Naidu with his decision to withdraw the ministers could attract the attention of everyone. But, as he was indecisive on pulling out of NDA, the YSR Congress took an advantage and fired the no-confidence salvo and could get upper hand again. But, the TDP supremo by pulling out of NDA, moving his own no-confidence motion and successfully garnering greater political support due to his stature in national politics could limit the damage and even move ahead of the opposition YSR Congress.

In fact, the TDP walked out of Modi ministry more due to political compulsions rather than ideological aversion. Even a BJP leader acknowledged that Naidu was forced to give up his alliance with his party only because of Jaganmohan Reddy. This is in fact a candid admission of a political reality. Thus, the TDP had to seek the withdrawal of its ministers and exit NDA to outsmart Jaganmohan Reddy.

In fact, byelections would have precipitated fresh round of political war between TDP and YSR Congress. Now, the resignation episode may end up as campaign scoring points only for YSR Congress as there will not be any by-elections. #KhabarLive #hydnews