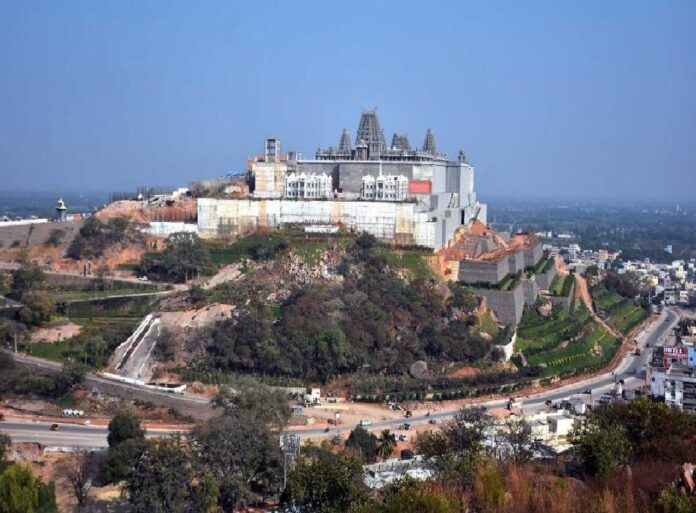 The dream temple project of Telangana CM has envisioned Yadadri in the lines of the Tirumala Tirupati temple. Political observers believe it will consolidate ruling TRS’s Hindu vote base and undermine BJP’s ‘Hindutva pitch’. 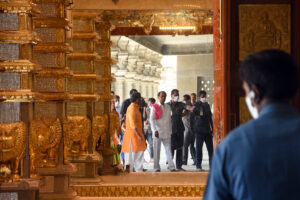 One of India’s most expensive temple projects is waiting for the Covid wave to recede before it makes its grand debut on the country’s religious map.

A massive revamp of the Yadagirigutta temple town is the pet project of Telangana Chief Minister K. Chandrashekhar Rao. It is an enterprise that underscores his oft-repeated boast that he is a ‘bigger Hindu’ than most. 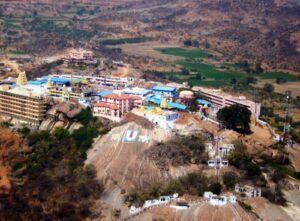 The original temple was tucked away in a cave on the single hillock of Yadagirigutta. There are eight more surrounding hills that oversee the Deccan Plateau, a part of which has now been used for the temple development project.

An official from the Yadagirigutta Temple Development Authority (YTDA) elaborated on the project: “One hill is just the temple. Of the eight surrounding hills, two have been taken up for development at the moment. It is a huge project that will continue for years. One of the hills will be a temple city that will have upscale hotels, hospitals, commercial projects and malls. A reservoir is also being planned in one of the nearby villages.” 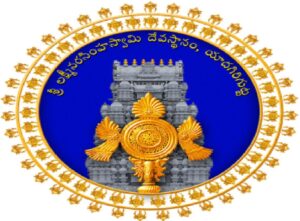 Despite several hurdles, and recently Covid, construction in the temple town did not stop for ‘a single’ day’, the temple development authority said.

In 2015, not long after he took over as chief minister of the country’s youngest state, KCR focussed on giving this temple a whole new face.

Though lakhs of devotees from other states visited the temple annually, KCR envisioned Yadagirigutta in the lines of the country’s richest temple Tirumala. He wanted it to be as popular, aides said.

The enterprise was so close to the chief minister’s heart that KCR appointed himself head of the YTDA, specifically formed to execute the project.

ALSO READ:  How 'Caste And Communal' 'Horror Stories' Developed In A Telangana Village?

On Vijaya Dashami day in 2016, the first pillar of the temple was laid. 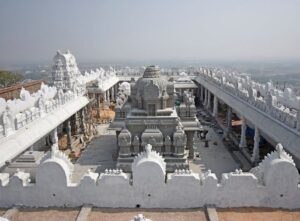 A temporary temple, balalayam, was set up nearby so that devotees could continue darshan.

The temple — from 25,000 square yards to 4 acres
The narrow, rocky hilly road that led up to the temple from the highway is now a thing of the past.

On the left of the highway today is an arch which marks the entry to the temple town — and the road from there looks no less fancier than the one that leads to the airport. There’s lush greenery on either side as the road goes up and around a beautified waterbody.

As one reaches the hill, the new temple is clearly visible even from a distance. The approach to the religious place is dazzling with lights. It is the highlight of the town, proud architects said.

The temple, which was originally on 25,000 square yards, has now been expanded and rebuilt on 4 acres.

The development authority acquired nearly 1,900 acres for the entire project. The ground plan primarily included housing, roads, green spaces and other commercial establishments. In the first phase, around 160 cottages were built on a 250-acre land. 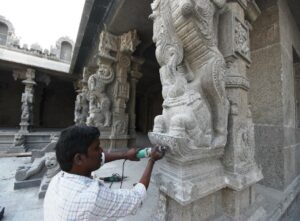 The construction of the temple was to be completed by 2019. Covid added to the delay but authorities plowed on even though they had lost 60 per cent of the workforce when the first wave hit.

At least 1,500 workers were employed just for the temple construction, of which 500 were sculptors from neighbouring Andhra Pradesh and Tamil Nadu.

Up until January 2020, almost 80 per cent of the work was completed, temple authorities said.

YTDA Vice Chairman Kishan Rao explained how they got around the workforce crisis. “We gave workers special permission to travel so that they could report to contractors on time. We made arrangement for stay on the premises. The project was completed almost on time because the chief minister took personal interest in it. KCR was passionate about the temple project. He had set a strict deadline too,” he said. 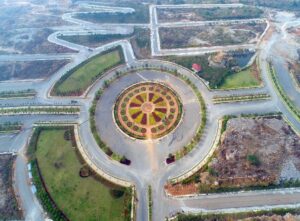 Along with Covid review meetings, those to monitor the temple town’s progress were also held regularly.

KCR visited the temple at least twice in the last 10 months, spending well over half a day each time — minutely going through planning and construction.

The initial budget for the temple was Rs 1,800 crore which was later brought down to Rs 1,200 crore. To build the main temple, Rs 243 crore was spent, and the rest on the adjoining township. Till now, nearly Rs 842 crore has been spent on the temple town project.

As expected, real estate prices have shot up in the area. According to local shop owner Rakesh Kumar, prices have gone up by as much as three times. “We see fancy cars too,” Kumar said. 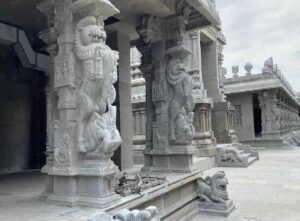 No bricks or cement used
The temple was entirely built using the ‘krishnasila’ stone or black granite. The granite was brought from Gurjepalli mines in Prakasam district, Andhra Pradesh.

To mix the mortar, architects used methods that was prevalent during the times of the Nizams. KCR was clear — he wanted a temple that would ‘last a 1,000 years’.

Kishan Rao said: “We took inspiration from how the Nizams built their monuments. We couldn’t use egg shells but put in other ingredients like lime, jute, inknut, jaggery water, aloe vera etc. We took notes from the architecture of the Kakatiya era.” 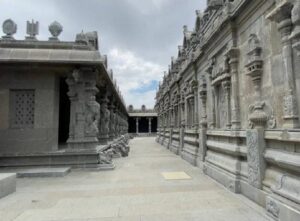 Chief Architect of the Temple (Sthapathy Advisor) Velu Anandachari said the special mortar and granite would maintain temperature inside the temple according to the seasons. In summers the temple would be cool, in winters warm.

Architects said aloe vera was primarily used as an adhesive in the mortar mix, and the inknut would ward off insects — drawn because of the jaggery.

At least 3,000 tonnes of mortar were used for the temple. The mix was set aside for a month before being applied. This gave a better finish, architects said.

Rao added there were committees to oversee every step of the process — from procurement of the stone, getting it tested to checking the quality of the teak used for the doors. A lab was set up in town to examine material quality.

The temple has more than 100 ‘Yali Pillars’ — as prominently seen in South India’s temples. According to Hindu mythology, Yali is a creature which is part lion, part elephant and part horse. It is sculpted on the pillars.

In 2019, engravings similar to KCR’s face were spotted on the temple pillars. This led to much disquiet among opposition parties and the Bajrang Dal. After protests, the carvings were removed.

Kishan Rao said the thin trickle of tourists earlier — around 5,000 a day — has now jumped to 30,000. Expectations are that this number will easily double once the temple is launched, he said. 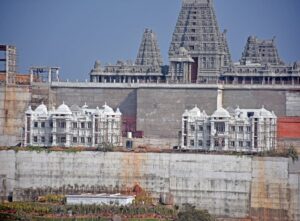 Officials said the annual revenue which stood at Rs 80 crore a year is also expected to go up significantly.

Temple Executive Officer Geetha Reddy told #KhabarLive that “this project, the new town are expected to boost employment. Nearly 5,000 people are employed for various projects in the town — housing, commercial etc. It is an ongoing process.”

The question now is whether the chief minister would want a temple board, similar to the Tirumala Tirupati Devasthanam’s. A source close to the developments told #KhabarLive, “this project is four times bigger now than what it was originally. And if one is pitching it to be like Tirumala, then why not have a board to govern it?”

Will Yadadri help ‘Hindu’ KCR?
In 2019, during the campaign for the Lok Sabha election, KCR had criticised the Bharatiya Janata Party for its ‘Hindutva’ politics. “Yours is political Hindutva, ours is true Hindutva… spiritual Hindutva,” had been his refrain.

He had said he was a ‘bigger Hindu’ than others but would ‘never use religion to further his political agenda’.

However, the brand new Yadadri temple is likely to curry favour with his Hindu vote bank, political analysts believe. It would benefit the Telangana Rashtra Samithi (TRS), more so since the BJP is desperate to gain a foothold in Telangana.

Analysts gage that “KCR has often flaunted his religious practises. He has performed the Chandi Yagam, presented ornaments to various deities, and now the construction of a new Yadadri temple.

“The deity at Yadadri is specially revered by the people of Telangana. Generations from this region have visited the temple. A new temple will surely endear KCR to the masses here.”

Observers also felt the lavish project somewhat ‘mitigates’ the TRS’ decision to rub shoulders with MP Asaduddin Owaisi. The BJP will no longer have that stick to beat the ruling party with, they felt. #KhabarLive #hydnews