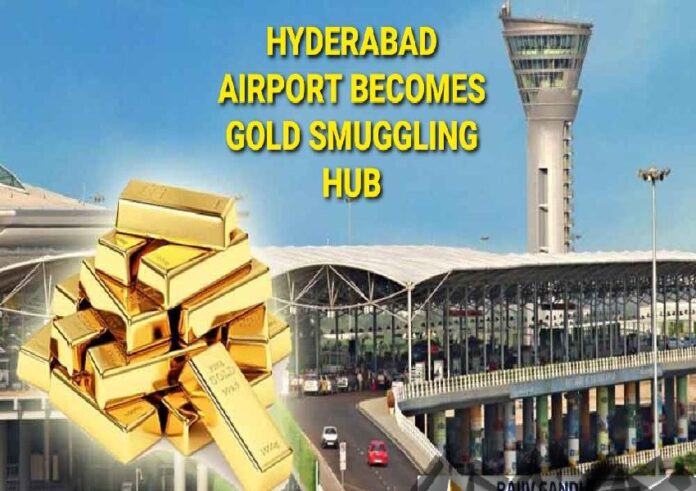 The Rajiv Gandhi International Airport (RGIA) has become the hub for smuggled gold and foreign currency as so many kgs of gold besides foreign currency was seized at the airport in recent times.

However, the nefarious works commenced again in May when the Centre launched the Vande Bharat Mission for evacuating stranded Indians across the globe.

The Customs officials at RGIA seized 21 kilograms of gold, worth Rs 25 crore, was seized recently. The unclaimed consignment of gold biscuits and jewellery, which did not have any supporting documents, arrived from one of the Gulf countries was headed to Mumbai, said reports.

Custom officials have also recovered crores of various foreign currency, weapons and drugs at RGIA. Recently, the officials seized foreign currency, in various denominations equivalent to Rs 1.3 crore, from a passenger heading to Dubai. In another incident, a couple was detained by Immigration officials after a bullet was found in their luggage.

The couple was going to the US when officials detained them during the regular checks. Later, the couple was handed over to police. It was revealed that the couple did possess a licensed weapon and forgot one of the bullets in their luggage. Customs officials have also detained a passenger at the airport in recent times who had arrived from Dubai with 150 packets of illegal foreign cigarettes.

According to a data with Custom officials, a high number of gold smuggling bids were unearthed at RGIA in recent times and it has become a hub for gold smuggling, import and export of drugs and for various other illegal activities.

The airport has also become the fifth most susceptible airport for gold smuggling across the world. As per officials, passengers seem to be flying to the city from different parts of the world like Singapore, Dubai, Bangkok and other countries. While some are doing it out of greed for commissions involved, others are falling prey they are sometimes unaware of the rules.

The role of passengers is limited to bringing the gold to the city airport by accepting the commission. After this, the receivers play the main role which involves the exit of smuggled gold from the airport.

It was also revealed that some city persons who are settled in different countries around the world have joined forces with smuggling gangs and operate the illegal activities.

Despite busting many rackets of smuggling, officials are still clueless about the main gangsters responsible for pumping in money into the system. This is because, these masterminds operate through middlemen, who are responsible for monitoring passengers and receiving the gold on their behalf.

Investigators may succeed in identifying the middlemen, but have a tough time in identifying masterminds who operate from Singapore, Dubai, Abu Dhabi, Qatar and Bangkok. #KhabarLive #hydnews