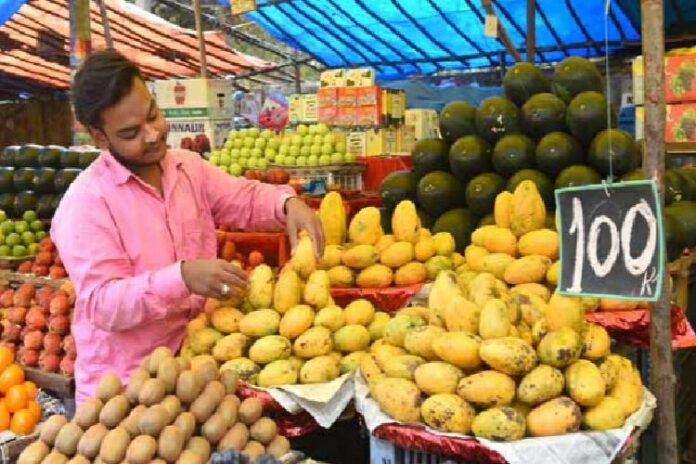 Mangoes have made its entry in the Hyderabad markets two months before the season and due to the less supply, the price of mangoes were fixed between Rs 100-200 based on the quality. However, the cost does not seem to affect the mango lovers as the vendors say they are doing fast business.

Much to the delight of mango lovers, the king of fruits have started to arrive in the city’s markets ahead of the usual season. Almost two months before the usual season, mangoes are being seen in markets across the city, though in small quantities. Given the short initial supplies, the cost of the fruit is high too.

Fruit sellers are quoting the price of first arrivals of mangoes anywhere between Rs 100 to Rs 200 per kg based on the quality. However, for mango lovers, the price doesn’t seem to be a deterrent as sellers say they are doing some brisk business. Though the presence of mangoes can be seen at retail and roadside outlets, they are said to be in high demand at the Erragadda market.

Some fruit sellers attribute the early arrivals of the fruit to the bountiful rains this season. “We expect the coming mango season to be much better than the last season given the early arrival of fruits. Though the price appears to be high right now, we expect it to start dropping once the supplies improve and more stocks arrive in the city,” said Ahmed Pasha, a fruit vendor.

Hyderabad usually receives mangoes towards the end of March. A variety of mangoes including the Benishan, Thothapari, and the Dasheri are the ones that usually arrive first in the market. However, it is the Nuzvid variety that has made its appearance first this time.

Vendors said that Grade I mangoes are being sold up to Rs 200 per kg, while Grade II mangoes are available at Rs 100 to Rs 150 per kg. “We are buying them from dealers at high prices and cannot reduce prices for customers as we will face losses,” said a vendor.

The mango flowering process starts in November and December and the ripening of mangoes takes place for some weeks. The mangoes which are available in the city during summers are mostly from Kollapur, Anantapur, Nuzvid, Khammam and other parts of Telangana and Andhra Pradesh.

Meanwhile, other fruits given adequate arrivals are being sold at competitive prices in the city retail markets. While an orange is available for Rs 5, bananas are sold anywhere between Rs 40 to Rs 50 per dozen, watermelons at Rs 30 per kg, and apples at Rs 100 for six fruits.

At present, mangoes are priced at higher rates since the vendors are buying them from dealers at high prices. They said that they would face losses if they reduce the price for customers. #KhabarLive #hydnews