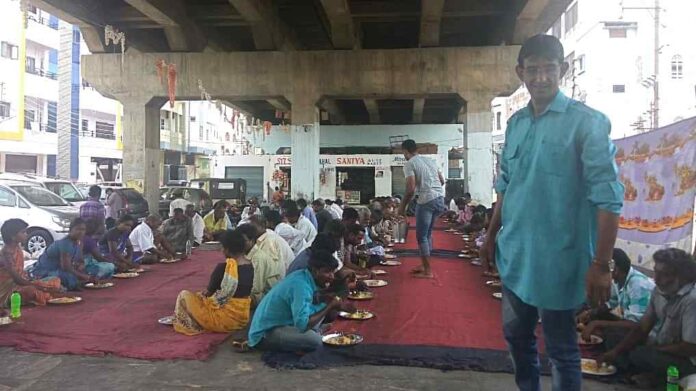 Feeding poor and hungry people is a passion of Hyderabad based social activist Azhar Maqsusi. He gets several awards across the world for his active self contribution on social uplifting in Hunger management.

Syed Osman Azhar Maqsusi, a social activist from the city, was on Friday conferred the Commonwealth Points of Light award for ‘Hunger Has No Religion’, his initiative which feeds about 1,500 people every day.

The award recognises outstanding individuals ‘who are making a change in their community’. “I am happy that I was given the award. But the most significant thing is to see the Indian tricolour next to ‘Hunger Has No Religion’ on the Points of Light website. That means the world to me. It is a great honour. I would like to thank the British Deputy High Commissioner Andrew Fleming, and the many well-wishers on social media,” Azhar Maqsusi told #KhabarLive.

ALSO READ:  Why Our Sports Personalities Doesn't Need A Respect To Their Talent?

Maqsusi decided to begin the campaign in 2011 when he saw a frail old woman near the Dabeerpura flyover in Old City of Hyderabad. He spoke to her and found out that she had not eaten. “Her name was Laxmi. She was old and hungry. That very day, I decided to start Hunger Has No Religion, and began arranging meals under the Dabeerpura flyover for those who could not afford them. My wife cooked meals from home for four or five months. Later, we scaled up, and after a few years, we then began serving meals near Gandhi Hospital,” Maqsusi recalled.

ALSO READ:  Why Slums In Hyderabad Are Struggling With Hunger, Unable To Get Govt Relief Aid?

“The initiative has now reached Bengaluru and Raichur in Karntaka, Cuttack in Odisha and Goalpara in Assam. All of this is being done by our NGO Sani Welfare Foundation,” he adds.

A few years ago, Maqsusi began the ‘Do Roti’ campaign. He urged people to carry with them two rotis whenever they leave from home and give them to those who are hungry. It was an attempt to discourage children from begging.

“Azhar’s contribution to society is incredible and has meant the difference between a meal or no meal for millions. There are many similar missions of selfless sacrifice and service, some emerging as a result of the pandemic, but the powerful ‘Hunger has no Religion’ has run for 8 years, reaching the most vulnerable and delivering a powerful underlying message to all,” the Points of Light website quoted Fleming as saying. #KhabarLive #hydnews