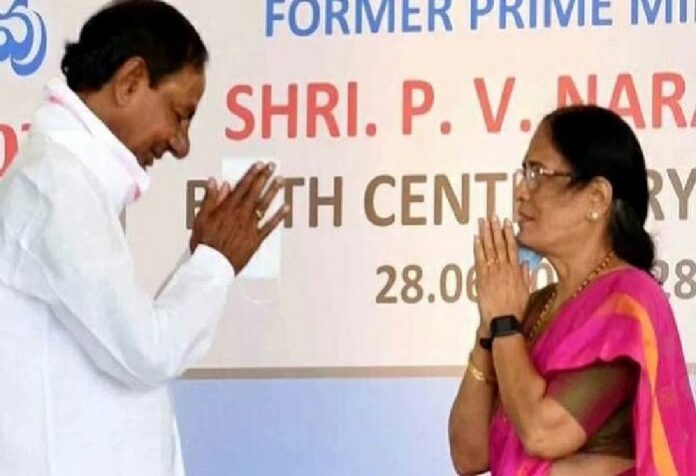 According to the TRS sources, by fielding Vani Devi in the MLC elections, KCR has checkmated both the Congress and the Bharatiya Janata Party, who were fighting for the legacy of Narasimha Rao.

Apparently, KCR wants to prove that the TRS is respecting Vani Devi with the MLC ticket, while the Congress has disowned PV’s family at the behest of their boss Sonia Gandhi and the BJP has failed to respect the family of PV by not giving him Bharat Ratna even during his birth centenary year.

ALSO READ:  Can An Anti-Modi Alliance Defeat The BJP In 2019?

Political analysts see the strategy in Vani Devi’s candidature as shrewd because she is well known as an artist, educationist, social activist and founder-principal of the Sri Venkateshwara Group of Institutions, which runs fine arts, pharmacy colleges and a model school in city, besides a junior college in Karimnagar district. As only graduates are eligible to vote in this election, TRS hopes to attract graduate voters with her candidature.

However, analysts say KCR has, in fact, humiliated PV’s family by giving the MLC ticket for Vani Devi. There is already a tight contest in the MLC elections for Hyderabad-Ranga Reddy-Mahabubnagar graduates’ constituency.

While the BJP fielded sitting MLC N Ramachandra Rao, the Congress has roped in former minister G Chinna Reddy of Wanaparthy. Added to this, ex-MLC Dr K Nageshwar is also in the fray.

All the three have their own strengths and they have already been campaigning extensively all over the constituency.

“Under these circumstances, giving the MLC ticket to PV’s daughter Vani Devi in the last days of nominations is a strategic mistake. The graduate voters are already angry with the TRS government and the chances of the TRS winning the seat are bleak. So, if Vani loses the elections, KCR will not lose anything, but it is an insult to PV family,” an analyst said.

“If he has so much concern and respect to PV family, he should have nominated her to Rajya Sabha or give her MLC seat under Governor’s quota,” he said. #KhabarLive #hydnews