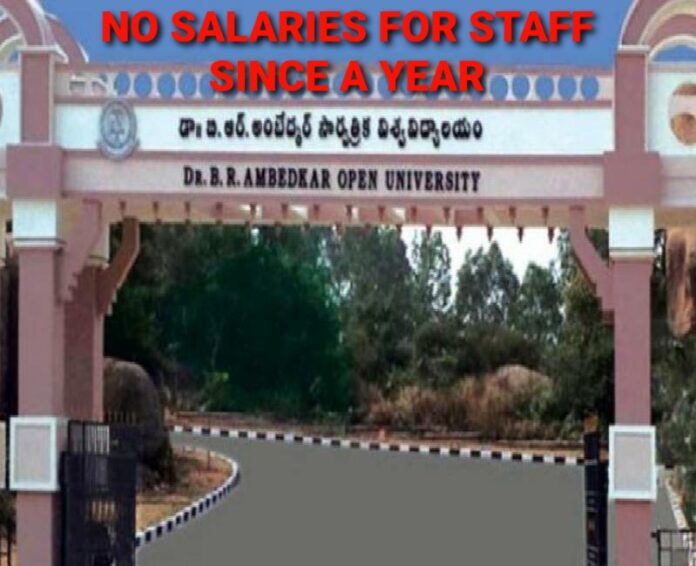 The 72 study centres and 13 regional coordination centres of the open university are functioning in Andhra Pradesh with funding from the state government and getting no salaries since an year above.

Dr B.R. Ambedkar Open University staff and academic councillors, including contract employees, have not been paid their salaries for the past 13 months in AndhraPradesh. Surprisingly, the reason being given is a technical glitch in updating their bank details.

Open university’s officer on special duty Velaga Joshi says only recently, details of contract employees were updated and they were paid their salaries.

Headquarters of the university is in Hyderabad. Its accounts amounting to about Rs. 300 crore are yet to be divided between the two states. “We are planning to take legal recourse in this regard,” Joshi stated.

Around 72 study centres and 13 regional coordination centres of the open university are functioning in Andhra Pradesh with funding from the state government. There are 456 staff, including 29 regular employees, working at these centres. At least 20,000 students have enrolled themselves for different under and postgraduate courses. They are being taught by more than 800 teaching staff. There are also councillors for the various courses.

A senior officer working in the Vijayawada region said they have been sending salary bill details to the Hyderabad head office as well as AP government officials concerned. But payments are not forthcoming. Another employee belonging to Kurnool district complained that even regular employees are not getting their salaries. Due to funds’ crunch, books and study materials are also not being distributed in sufficient quantities to students.

Velaga Joshi, however, said the issue could be resolved soon after approval from the state government. #KhabarLive #hydnews