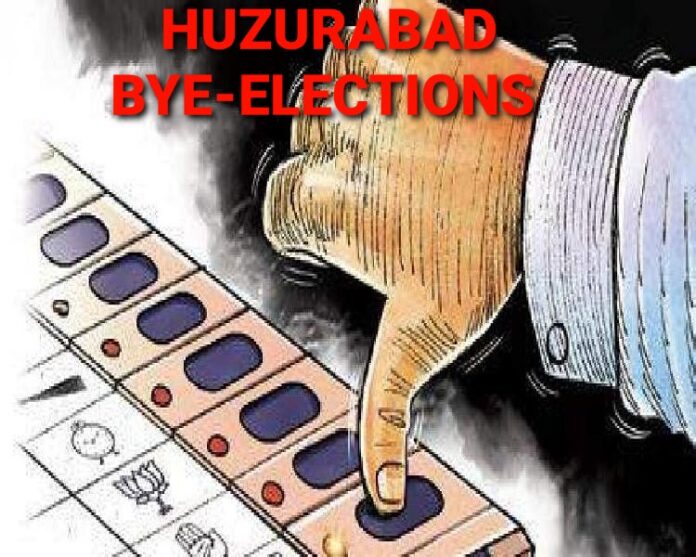 Almost all major contesting parties political campaigns have intensified campaigning in Huzurabad constituency to woo voters with several attractions in manifestos and personal presentations to by-polls.

The by-election was necessitated by the resignation of former Eatala Rajender from his MLA post four months ago. Since then, the constituency has become a hotbed for political activities by leaders and parties of all hues.

BJP candidate Eatala Rajender who served as the MLA for six times has been busy holding padayatras, review meetings and regular paying visits across the constituency ever since he resigned from his post. The BJP leaders have been devising their strategies for victory in the election.

Meanwhile, the ruling TRS deployed ministers T Harish Rao, Gangula Kamalakar and Koppula Eshwar to turn the public over to its side.

Many leaders of dominant social classes in the constituency were lured to join TRS party. As part of this, L Ramana of Padmashali community and Peddireddy from Reddy community, a former minister Kaushik Reddywere inducted in TRS.

Kuashik Reddy was nominated for the MLC post and local TRS leader Banda Srinivas, a Dalit, was made the chairman of the SC Corporation while a BC leader Vakulabaranam Krishna Mohan was made BC Commission Chairman.

The TRS leadership is trying to attract non-Dalits with welfare schemes and is promising to bring ‘BC Bandhu’ in future.

After going all out to woo Schedules Caste voters in Huzurabad with Dalit Bandhu, the Telangana Rashtra Samiti (TRS) leadership is on a mission to win over non-Dalits in the constituency.

Out of a total of 2.36 lakh voters in the constituency, non-Dalits comprise 1.80 lakh of whom around 1.30 lakh hail from Backward Classes. The TRS leadership is trying to attract non-Dalits with welfare schemes and is promising to bring ‘BC Bandhu’ in future.

Ministers from ST and Minority categories, Satyavathi Rathod and Mohd Mahmood Ali, will hold meetings with their communities, which account for 4,220 and 5,100 voters respectively.

While the TRS is confident of total support from Dalits on the back of Dalit Bandhu, it is wary of Opposition parties trying to polarise non-Dalits against the TRS with a campaign that it did not extend Dalit Bandhu-type benefit to other castes. There are 46,700 Dalit voters in the constituency of whom Madigas are 35,600 and Malas 11,100.

There are close to 21,000 Dalit families spread over five mandals in the constituency. The party leadership is confident of Dalits voting en masse in favour of the TRS as all these families were covered under Dalit Bandhu for whom the government recently transferred Rs 2,000 crore into their bank accounts at Rs10 lakh each. With this, the TRS is now focused on other castes who comprise a major chunk of voters in the constituency. Among the OCs, the Reddy voters are a majority at 22,600 while Brahmins, Velamas and others constitute 12,150 voters.

The TRS has roped in party’s Reddy leaders to lure them into its fold. The ministers recently laid foundation for the construction of Reddy community halls in the constituencies for which ministers and party MLAs from Reddy community were invited.

Even Legislative Assembly speaker Pocharam Srinivas Reddy participated in one such event and addressed a public meeting in which he praised the TRS government’s welfare schemes inviting the wrath of Opposition parties who questioned how the Speaker could take part in political activities. However, Pocharam defended himself saying he came there as a “Reddy” and not as the Speaker.

In a bid to win the TRS party came up with various strategies under the leadership of Harish Rao such as holding series of meetings with various social groups in the constituency and launching a series of development works in order to impress the voters.

Meanwhile, BJP State president Bandi Sanjay Kumar who took up Praja Sangrama Yatra has planned to organise a massive public meeting in October in Husnabad near Huzurabad in view of election code of conduct.

However, Congress party is yet to announce its candidate for the by-election. Since it is the first election the party is facing under the leadership of TPCC chief A Revanth Reddy, all eyes are on the Congress now. #KhabarLive #hydnews