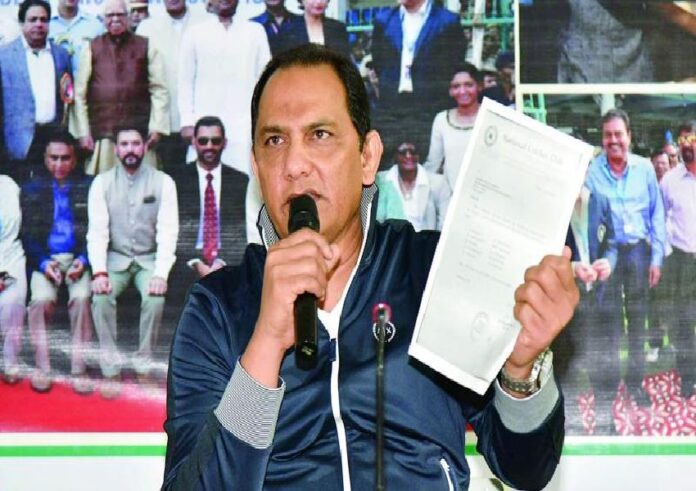 In the meeting, members could not agree on the all-important appointment of the ombudsman and ethics officer, which led to the trading of charges between president Mohammad Azharuddin and former president Arshad Ayub, both former Test cricketers. They vociferously discussed everything but cricket and accused each other of misconduct.

Trouble at meet, held at the Rajiv Gandhi International Cricket Stadium in Uppal, began at the sixth point – after a smooth closure of the first five routine business points on the agenda. These included confirming minutes of previous meetings, adopting the secretary’s report for 2017-18, treasurer’s report and audited financial statement of accounts for 2017-18, annual budget and appointment of auditors and fixing their remuneration.

Then all hell broke loose with the sixth item on the agenda: appointment of an ombudsman and an ethics officer.

According to members present at the meeting, Azhar pitched for Justice (retd) Deepak Varma for the key post and insisted that his choice was final and that it has been decided in the apex council meeting of the HCA.

The general body of the HCA, which has absolute power with regards to the issue as per the HCA constitution, did not accept it. Several of them, led by N. Shivlal Yadav, former Test cricketer and BCCI interim president, said that it was not up to the apex council to decide.

Shivalal Yadav also expressed unhappiness over the way the AGM was being undermined.

“We urged the president to seek the opinion of a majority of members either through voice vote or secret ballot. He is not ready to consider the majority opinion,” Yadav said.

Much heat was generated following this, leading to a blockade of business proceedings of the AGM, which led to Arshad Ayub jumping into the fray and raking up pending CBI charges of match-fixing and betting scandals in the past against Azhar. Mr Ayub then asked Azhar to step down as the head of HCA.

Azhar hit back at Arshad saying corruption in the HCA had started when he (Arshad) was the president. Azharuddin and HCA secretary Vijayanand openly shouted at each other, pressing for their respective choices.

Several members trooped near the dais and raised slogans against president Azhar and insisted on majority opinion being sought on the appointments.

Secretaries of clubs having representation in the HCA questioned the neglect of cricket in the districts. Later, former Ranji Trophy cricketer Vanka Prathap took Azhar’s case and trained his guns at Arshad, and both of them got personal.

While Prathap claimed that he got Arshad off the hook in a land litigation case that could’ve landed him behind bars, Arshad accused Prathap of dropping cricketers in London on cricket tours that he had organised. Each called the other a ‘thief.’

Hanumantha Rao, who represents Amberpet Cricket Club, said that people facing allegations of any nature should not form part of managing the HCA affairs. Vinod said, “please keep the spirit of democracy alive.”

Regarding the unfinished business of appointment of the ombudsman and ethics officer, apart from Justice Varma, names of Justices (retd) Nisar Ahmad Kakru and Meena Kumari have been propped up for the two posts.

The matter has been deferred to April 11 when it will be put to vote, either by secret ballot or raising of hands.

Asked why international players from Hyderabad like V.V.S. Laxman or Venkatapathi Raju were not considered for CAC, the secretary said they had their own work and did not spare time for the HCA.

ALSO READ:  Why 'Telangana University' Student Being Accused Of Meeting Naxalites During A Study Tour?

The secretary’s statement on approving the audit reports was self-explanatory that HCA has failed to implement the Lodha Committee recommendations on strict compliances. The audit report of 2017-18 was approved on Sunday according to the secretary and the same for subsequent fiscals of 2018-19 and 2019-20 were yet to be approved.

The agenda of the HCA annual general meeting that was stalled because of a fracas and will be taken up on April 11:

b. The report and recommendations of the governing council and to propose policy directions to the apex council.

c. Consideration of any motion, notice whereof is given by a full member to the secretary 21 days before the meeting.

d. To appoint the representative or representatives of the Hyderabad Cricket Association on the Board of Control for Cricket in India and/ or similar organisations.

e. To consider the report and recommendations of the apex council.

f. To consider any motion, notice whereof is given by a full member to the Secretary 21 days before the meeting. #KhabarLive #hydnews