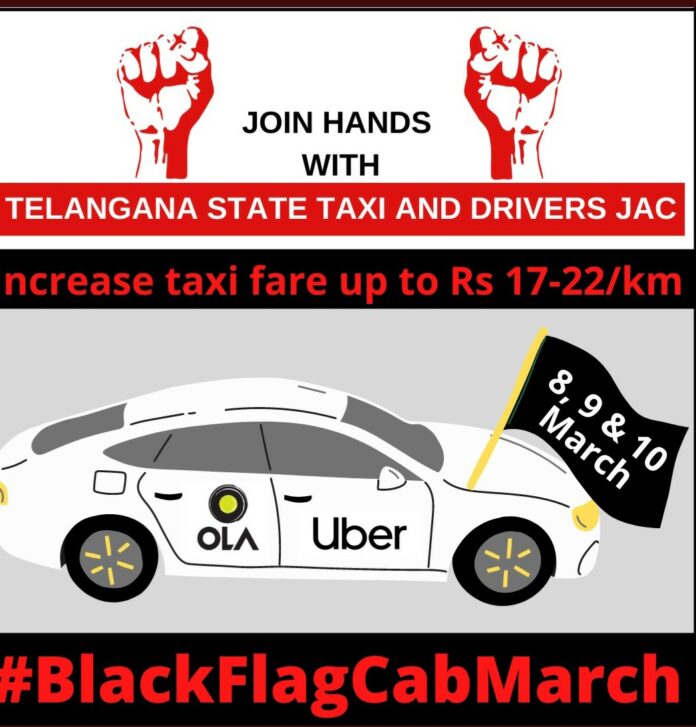 The Taxicab drivers in the city are feeling the pinch of fuel hike and demand cab aggregator apps to hike their rates.

Amid the soaring fuel prices, app-based cab aggregators have hiked their ride fares but not the base price of the drivers, claim the Telangana State Taxi and Drivers Joint Action Committee (JAC), the JAC launched a two-day taxi march to protest against the fuel prices and the taxi aggregators.

The Chairman of Telangana State Taxi and Driver’s JAC, Shaik Salauddin, told the media that despite the rising fuel prices, app-based cab aggregators have not increased the base rate for the drivers. To protest against the alleged unfair practices, the JAC claimed that more than 35,000 taxis will take part in a #BlackFlagCabMarch from March 8 to 10, 2021.

“It’s a symbolic protest where we will hoist black flags on our cars. Today (Monday) is day 1 of the protest and we are informing the public how much the cab aggregators make and how much drivers associated with them earn. The idea is to generate public support for our cause,” said Shaik.

The JAC had approached the cab aggregators, Ola, Uber, IT companies and tours and travels services with a set of demands. However, they have not heard back from the companies.

Telangana State Taxi & Drivers JAC who are with these @Olacabs @Uber app-based companies IT, Tours & Travel sector are paying higher prices for fuel even as their earnings remain the same. More than 35,000 shall start a #BlackFlagCabMarch from 8th March to 10th March 2021 pic.twitter.com/zqPbIZlRoL

The JAC said companies like Uber are now taking a commission of 30-35% per ride. Shaik claimed that the low fares and high commission being charged by the companies have cut the net income of the drivers, dramatically.

Owing to the lockdown, nearly 60% of drivers in Hyderabad have gone back to their home villages. With the rising diesel cost, barely 40% of the taxicabs are currently on the road, he added.

The JAC had approached the app-based cab aggregators to set a base fare of Rs 150, apart from raising the per kilometre taxi fare rates to Rs 17-22 to improve the drivers’ income.

Demands are being made for higher fares for bigger cars to cover steeper maintenance costs. The JAC pointed out that many drivers have been unable to pay the EMIs on their vehicles due to the financial crisis caused due to the COVID-19-induced lockdown restrictions. With the moratorium on loan repayment lapsed, the banks have begun adding pressure to pay EMIs.

The drivers have also sought the cab aggregators to ensure that the pickup of the customer rides is within three kilometres of the driver’s location. The JAC reasons that the drivers are forced to travel great distances to pick up a commuter, but the fare only covers cost from the point of pick up to the destination. The drivers said, the cab aggregator companies should pay for the additional distance travelled by the drivers for pickup.

In their statement to the press, JAC said, “Many airport bookings are for the city or far-off suburbs, from where the driver needs to come back empty. However, this dead run is not factored in the fare, and with the rising diesel cost, there is no way the driver can bear it.”

The diesel rate in the city Rs 88.86 per litre. The price of diesel has gone up by Rs 6.40 over the last 11 days, with a 60 paise hike. “While both cab aggregators resumed full services earlier this month, drivers said there is hardly any business, with most getting an average of two to three rides per day,” said JAC.

They also insisted that the taxi meters should be made mandatory for all commercial vehicles used for transportation following the rules of the Motor Vehicles Act. They have also sought for setting up a Drivers Welfare Board in the state. #KhabarLive #hydnews