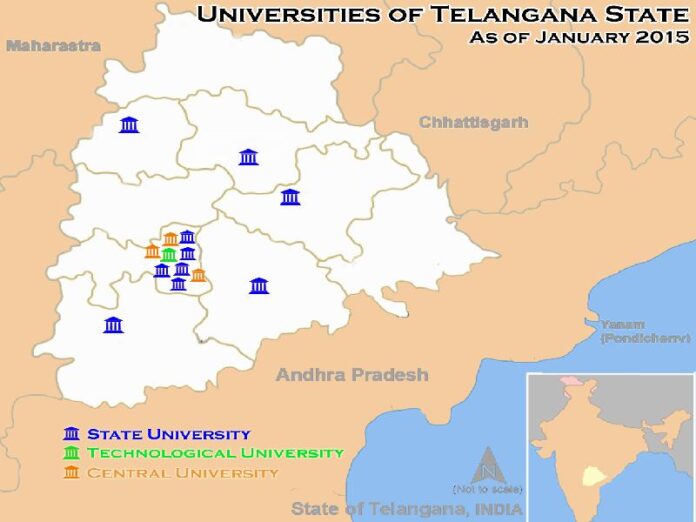 Since last 18 months, universities in Telangana have not had official vice chancellors. The state-run universities are being headed by IAS officers who are acting as in-charge VCs.

Student activists, a section of the academic fraternity and political parties are up in arms against the Telangana government over the delay in appointing regular vice chancellors to the state universities. They allege that the state government is “deliberately” delaying the appointments and running the universities under the care of the civil servants (IAS officers) though it is against the University Grants Commission (UGC) guidelines.

After the end of the VCs’ tenure in July 2019, the Telangana government has appointed civil servants who were holding other positions in the government as in-charge VCs. Many of them have other responsibilities as well, and hence, filling faculty vacancies and research that play a major role in getting universities requisite funding have taken a backseat, academics and students say.

According to sources, the reason behind the government not appointing regular VCs is that its planning to amend the Andhra Pradesh Universities Act, 1991, which governs the process of appointment of VCs. “The state government wants to amend the Universities Act, 1991, in accordance with the needs of the new state. The government wants to appoint VCs only after amending the act. Hence, the process is being delayed,” said a top official in the education department. That is why there is an inordinate delay in the constitution of search committees, seeking nominees from UGC and universities which is the beginning of preliminary process in the appointment of VCs to all universities.

A few universities like the Osmania University (OU), Jawaharlal Nehru Technological University (JNTU), Hyderabad and Telangana University (TU) are still being headed by IAS officers as their in-charge VCs. But the bureaucrats who are also holding other additional responsibilities in the state government hardly have time for these academic institutes.

In the absence of VCs, the universities are now administered by the registrars. Development activities like building infrastructure and recruiting teaching faculty in universities, especially in the newly established ones are badly hit due to the absence of regular VCs.

Even the UGC felt that Telangana government is not taking initiative in the appointment of VCs while its neighbouring Andhra Pradesh has recently appointed VCs for the three universities. When asked if Telangana government sought for UGC’s nominee for appointing VCs, Vice Chairman of UGC Professor H Devaraj, during his recent visit to Hyderabad, said, “Andhra Pradesh has at least initiated the process, but it is yet to begin in Telangana.”

Earlier, this week, BJP leaders in the state met the state governor Tamilisai Soundararajan urging her to intervene to solve the issue prevailing in universities. BJP national leader Muralidahar Rao alleged that TRS government is neglecting the educational sector by promoting private universities. He added that there are more than 65% vacancies in universities and degree colleges in the state.

While it has been more than 18 months since the universities in the state do not have regular VCs, it was recently that Chief Minister K Chandrashekar Rao (KCR) appointed regular VCs to Konda Laxman Bapuji Horticulture University and  PV Narasimha Rao Veterinary Science Universities.

Satavahana University in Karimnagar is being run by in-charge VCs, who are IAS officers from 2015 and up. Prof Sujatha Surepally, Head of the Department (HOD) Sociology at university alleged that the university is not seeing any academic progress due lack of allocation of funds, grants and a regular VC.

Speaking to #KhabarLive, she said, “Academic institutions should be headed by academicians. Universities are not government offices to run in a certain way. An attempt is being made to favour private universities over public universities the same way that private schools have redeemed the public schools.”

She added, “The state is indebted to the student fraternity as many students sacrificed their careers during the Telangana movement, believing that their unemployment would be addressed in the new state. However, it is the students and education sector that are being met with injustice here even now.”

Sujatha also said that the UGC grants funds and accord recognitions based on student-teacher ratio, however, “since there is no VC, and no appointments, mere buildings don’t make a university. These require qualified people and research [to receive funding].”

In a recent round table organised by Osmania University Teachers Association (OUTA) over the delay in appointment of VCs, All India Congress Committee (AICC) national spokesperson Dr Dasoju Sravan also alleged that TRS government is destroying the education system in the state.

Stalin, a research scholar and student leader of All India Students Federation leader, said, “With the in-charge VCs, it’s not even nearly possible to run the universities; forget fulfilling teaching staff vacancies. The government must appoint the VCs on a regular basis and initiate the vacancy filling procedure.”

“If the government had already done at least one round of recruitment in universities, this much desperation would have been not there,” he added.

Suman D, a senior research scholar of political science at Hyderabad Central University, said, “How can it be called university if it does not have faculty and research? One of the main purposes of the Telangana movement was proper appointments to these positions. The government should step up and fill the vacancies.”

However, it is said that the government is seriously considering completing the regular VC appointment procedure after scrutinising applications and search committee reports.

Dr Rajesh Kumar, an assistant professor currently working as contract faculty at the Department of Economics in Kakatiya University for the last five years, said that the Telangana movement has created high hopes in terms of education and employment but failed in materialising them. Speaking to #KhabarLive, he said, “The presently unemployed are students who participated relentlessly in the statehood movement, thinking it would create a bright future, but now they are left to live in uncertainty.”

Presently, premier universities in the state are being run by the IAS officers.  Aravind Kumar, a 1991 batch IAS officer is serving as in-charge VC at Osmania University and Mahatma Gandhi University. The officer also holds other positions. At Satavahana University, the in-charge VC is T Chiranjeevulu, a senior IAS officer, who is also pursuing Ph.D in education at Kakatiya University, Warangal.

ALSO READ:  Who Is Running The ‘Orchestrated Wine And Cheese Campaign’ Against Aadhaar In The Supreme Court?

In fact, lack of proper guidance to the higher education institutes is going to pose challenge to the new state which wants to improve standards in higher education with programs like, ‘KG to PG free education scheme’. Non-availability of skilled faculty has always been the major issue for the universities. Around 1,000 teaching posts were vacant in all state universities when Telangana was formed. Now the number has reached 1,200.  “The government wants to fill the vacant posts, but the VCs should be appointed first,” said a senior official of the Telangana State Council of Higher Education. Once the VCs are appointed, they can take the responsibility of recruiting teaching posts, he added. #KhabarLive #hydnews