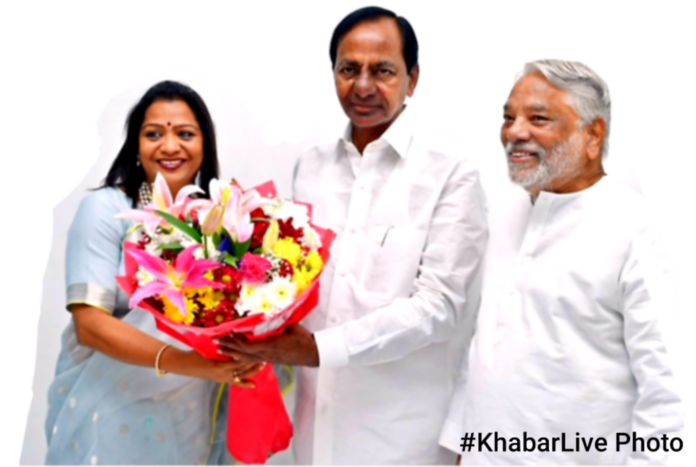 The selection for the election of Gadwala Vijayalaxmi as the new Mayor of GHMC surprised the TRS leaders and newly-elected corporators as once again Chief Minister K Chandrasekhar Rao has given a chance to a corporator from Munnuru Kapu community though there are many corporators elected from the Reddy community.

Many expected that the Mayor’s post will be given to a Reddy candidate. Several corporators from the Reddy community (like Sindhu Adarsh Reddy, Manne Kavitha Reddy, P Vijaya Reddy, Mothe Srilatha Reddy and others) approached the Chief Minister and TRS working president and IT Minister KT Rama Rao. However, the party Chief KCR has given an opportunity to TRS secretary general K Keshava Rao’s (Munnuru Kapu) daughter and Banjara Hills corporator Gadwala Vijayalaxmi, though she married a Reddy.

It is learnt that KTR, too, batted for the candidature of a corporator from the Reddy community for Mayoral post, however, KCR has given a big surprise to the party leaders and opponent parties, too, by giving a chance to Vijayalaxmi.

Many assumed that the Chief Minister may not give a chance to Munnuru Kapu corporator as former GHMC Mayor Bonthu Rammohan was from the same community. Even party leaders stated that the TRS working president didn’t look happy on Thursday on the day the Mayor election was held.

One of the TRS leaders stated that selection of Vijayalaxmi will help the TRS to give an impression that even the TRS is also giving top priority to Munnuru Kapus and BCs assuming that many Munnuru Kapus are inclining towards the BJP after Bandi Sanjay was appointed the Telangana BJP chief.

Munnuru Kapus are in large numbers in Telangana State and are active in politics and they will give a tough competition to any community if they unite like the Velama community. As of now, Munnuru Kapus are not united. However, Munnuru Kapus will become a strong political force if they are united, he opined. The Chief Minister succeeded in attracting the Reddy community by giving their leaders top priority in the party, he reminded.

Another leader, who played an important role during the Mayor’s elections, opined that nobody expected Vijayalaxmi’s selection. “However, the party boss will not take hasty decisions. The CM will take decisions considering all angles. I think there would be a good reason for the selection of Vijayalaxmi”, he opined.

Another version is in discussions that Vijayalaxmi has elected for a second time. She is well educated and from a political family. She speaks Telugu, Hindi and English fluently. She is senior in terms of age when compared to other corporators,  who are in the race for the Mayor’s post.

It is learnt that keeping all these dangers, KCR has given a chance of Mayor to Munnuru Kapu corporator to stop such developments at the beginning point. #KhabarLive #hydnews