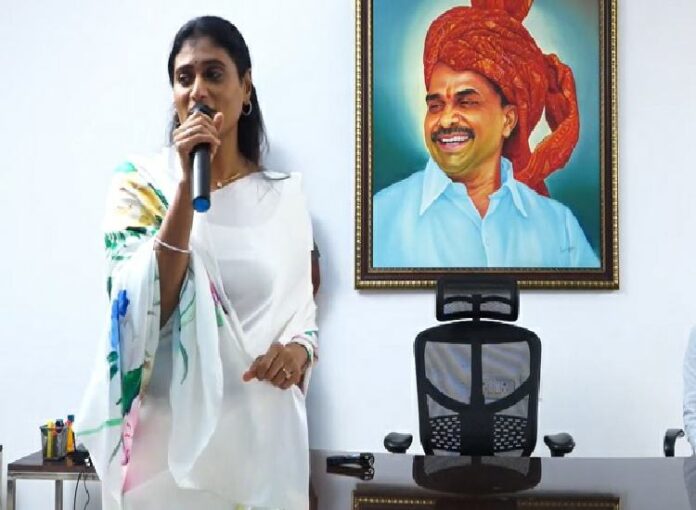 According to reliable sources close to YS Sharmila, she is all set for the launch of a new political party in Telangana. All kinds of theories are speculated around the sudden development. Who is behind Sharmila’s political foray? Though it is being argued that she is chalking out her course due to differences with his brother YS Jagan, many in politics are sceptical of this grapevine. If she wants to take on her brother, the party should have been launched in Andhra Pradesh.

The first theory is that KCR known for his proximity with Jagan is behind the new political experiment. As per this theory, KCR fears a section of Reddy politicians may switch their loyalties to BJP as Congress fails to inspire confidence in them. The BJP which is already gaining due to growing discontent over the KCR regime may further get strengthened if this social shift occurs. Sharmila’s political project will help prevent this from happening by rallying Reddys under the banner of YSR legacy, according to this theory.

However, political circles are sceptical of this theory. They refer to KCR’s badinage on Sharmila. “Is running a political party like managing a pan dabba? Such parties will wind up within no time”, KCR reportedly commented. KCR is the first and still the only senior politician to respond to this news. Sharmila in her initial remarks was critical of the KCR regime. “Are farmers happy? Are students getting free education in Telangana?”, she questioned indirectly referring to the KCR rule.

The impact of Sharmila’s political odyssey on Andhra Pradesh’s politics is difficult to predict. Jagan is unlikely to gain from this. But, the risk of its adverse impact cannot be ruled out. Thus, Jagan may not resort to this risky move for the sake of KCR, political observers opine. Sajjala Ramakrishna Reddy in his reaction clearly demarcated YSR Congress from Sharmila’s political moves.

The second theory hints at BJP karseva behind Sharmila’s latest political match. As per this theory, the BJP believes that it is unlikely to lure reddys despite hectic saffron social engineering. The Reddys may be disgruntled with the KCR regime. But, still, Congress remains a force to reckon with. Historically Congress has been the natural political ally of Reddys, who still hold sway in Telangana politics. The change of guard in state congress and possible win in Nagarjuna Sagar may make Reddys gravitate towards the congress. On the other hand, KCR still attracts the minorities and marginalised sections who are a strong vote bank for YS Jagan in neighbouring state.

As per this theory, the BJP hopes Sharmila to rally Reddys and the minorities, thus damaging both Congress and TRS to the extent possible.

All these theories are still in the realm of political speculations. It is difficult to either validate or reject these theories. But, one thing is certain. There are strong political forces behind Sharmila’s latest move. Who is behind her? What is the strategy? Closer scrutiny of future political developments will find answers to these questions. #KhabarLive #hydnews