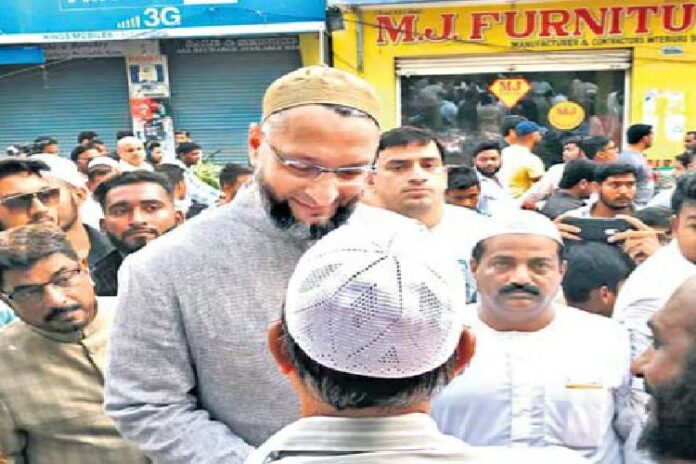 The fastest growing political party All India Majlis Ittehadul-e-Muslimeen (AIMIM) led by firebrand politician Asaduddin Owaisi is taking trips and turns in West Bengal elections. Many hurdles, teething troubles and local leadership troubles makes party to go off the track in some instances but party supremo is confident on tough fight in this debutant poll entry in Bengal.

For Asaduddin Owaisi, a Bar-at-Law and four-time member of the Lok Sabha from Hyderabad, the ensuing West Bengal Assembly election may turn out to be a game changer. His All India Majlis Ittehadul-e-Muslimeen (AIMIM) will, in all probability, contest in this election. If the AIMIM can put up a good show, then a new chapter of identity politics in India will be unfurled.

For Mamata Banerjee, the Chief Minister of West Bengal, this election is equally important. There is no doubt that her leadership capability is under question and her popularity graph is showing signs of a downward trend. The AIMIM’s presence in the West Bengal elections is sure to cut into Muslim votes, Mamata’s most important electoral prop. How much will be the dent, it is difficult to tell now. But the tension in the Trinamool Congress camp is palpable.

Good Base
Right now it is difficult to predict if Owaisi will bag a considerable number of seats in West Bengal. But he has reasons for hope. The AIMIM bagged five seats in the just concluded Bihar Assembly election — all from the Seemanchal region, which is contiguous to West Bengal’s North Dinajpur district. The latter’s population structure has a stark similarity with that of the former — a preponderance of Muslim electorate.

So Owaisi can hope for a good performance in such districts of West Bengal where Muslims are in considerable numbers — Malda, Murshidabad, Nadia, Birbhum, etc. In fact, the AIMIM has already targeted these areas and has been holding regular meetings there. In Murshidabad district, its membership has already crossed 2-lakh-mark and in West Bengal as a whole, the AIMIM now has 10 lakh members. Not an insignificant number by any count.

A Different Election
This year’s Assembly election will be different from all other previous elections. So long Muslim electorates of West Bengal have not been found to be identity conscious and they always tied their lot with mainstream secular parties. The Indian Union Muslim League, a sectional outfit, always remained on the fringe. As the principal mainstream party of the State, the TMC’s hold over the Muslim electorate is now near total. Analyses show that the more is the concentration of the Muslim community in any constituency, the more is TMCs percentage of votes among them. In some cases, the TMC is reported to have received more than 40% votes from among the minority community, where the latter enjoys heavy concentration.

There are 125 Assembly seats in West Bengal where the minority community enjoys considerable electoral sway. In the last Assembly election, the TMC won 95 of it. This alone should explain that the task before Owaisi is quite tough. Some election ‘pundits’ of the State are opining that if the AIMIM can chip away even 2% or 3% votes, then the TMC will face a daunting task.

It is true that in the electoral history of the State, any party or combination of parties getting more than 50% of Muslim votes has walked away with more than 200 Assembly seats. In 2006, the Left Front won 233 of the 294 Assembly seats. In 2009 parliamentary poll, the Congress and TMC alliance won 26 out of 42 seats from the State. In 2011, the TMC won 227 Assembly seats. In each case, the minority vote share of the winning side was either 50% or above. But in the 2014 Lok Sabha poll, the TMC alone bagged 40% Muslim votes but won 34 of the 42 parliamentary seats from West Bengal.

AIMIM’s Potential
The 2016 poll result shows that the presence of the AIMIM in West Bengal will threaten the TMC only when the former can bag large chunks of Muslim votes in those 95 constituencies from where the TMC had won in that Assembly poll. But this will alone not suffice. If the Congress and Left Front alliance gets a significant percentage of the majority community vote, then it will be advantage TMC. At the same time, it will mar the BJP’s prospects. So the pre-poll scenario of the State is hanging in a fine balance.

ALSO READ:  'Keeping A Job' While Battling A 'Mental Illness' Is A Nightmare In Hyderabad

But poll watchers are not dismissing the AIMIM’s potential to influence the coming West Bengal Assembly election results one way or the other. Headquartered in Hyderabad, the AIMIM is trying to spread in Maharashtra. West Bengal should be particularly important for it as the State has the second highest Muslim population in the country after Uttar Pradesh. The three Muslim dominated districts of North Dinajpur, Malda and Murshidabad have 43 Assembly seats. Owaisi will certainly set his eyes on this arc. Apart from this area, Muslims constitute significant percentages of electorates in six more districts like Birbhum, South 24 Parganas, North 24 Parganas, Nadia, Howrah and Cooch Behar. In these districts, their percentage in the total population varies from 25 to 37.

But the AIMIM has one serious disadvantage. Most of its natural base in West Bengal is likely to be among the Urdu-speaking minority community while the overwhelming number of Muslim people here are Bengali-speaking among whom Mamata’s popularity is unquestionable. Owaisi must be aware of it. Perhaps he will be contesting in West Bengal to give his party the required first niche in its quest for identity politics in this part of the country. #KhabarLive #hydnews