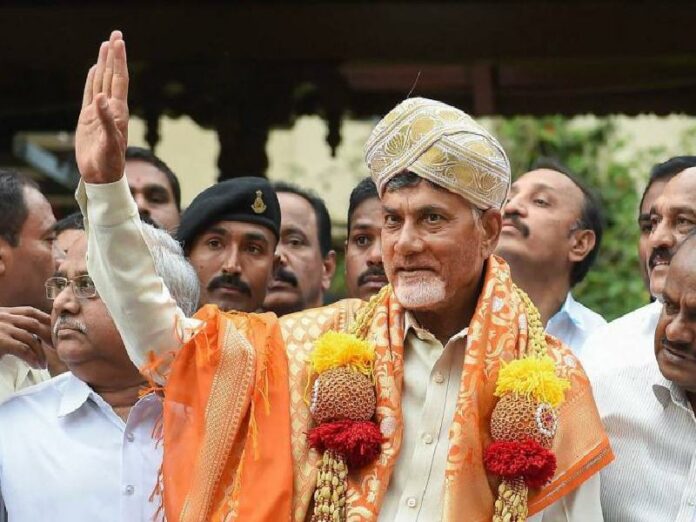 The political scenario in Andhra Pradesh has been largely revolving around alleged targeted attacks on Hindu places of worship, since the mysterious burning of a 62-year-old chariot at the premises of the Sri Lakshmi Narasimha Swamy temple at Antarvedi in East Godavari district in September 2020. While the BJP was leading the campaign initially, all eyes have now turned to former Chief Minister and Telugu Desam Party (TDP) supremo N Chandrababu Naidu who has taken to aggressive ‘Hindutva’ politics.

Political observers point to Naidu blatantly attacking Chief Minister YS Jagan Mohan Reddy’s faith and alleging that there have been rampant Christian religious conversions under his watch. The TDP chief, who calls himself a ‘secular’ leader and invokes the instance of snapping ties with the BJP in the aftermath of the Gujarat communal riots under then Chief Minister Narendra Modi in 2002 to validate his credibility, made a significant turn late last year, mirroring the BJP. This, observers say, is evidence of how the political ground is shifting in Andhra Pradesh.

Addressing an executive party meeting in Mangalagiri last week, Chandrababu Naidu charged that Chief Minister YS Jagan Mohan Reddy had lost the right to rule, citing a recent incident where the idol of Lord Rama was desecrated at Ramatheertham in Vizianagaram district. Pointing to Jagan’s faith, Naidu said that he is a Christian Chief Minister who will visit Jerusalem if he wins the election, while he is a Hindu by birth . “Venkateswara Swamy is my dear god, whereas your dear god is Jesus Christ. If you win the elections you will go to Jerusalem, but when I win, I will go to Venkateswara Swamy (Tirupati). You keep the Bible by your side. There’s nothing wrong in it, but if there are attacks on Hindu temples and Hindu deities, I dare you!” Naidu said.

ALSO READ:  Do You Know What Is 'Proxy Voting' In 'Democracy' For Non-Resident Indians?

A blatant attack involving Jagan’s personal faith and religion, insinuating that the Chief Minister is deliberately not preventing attacks as he belongs to a different religion, has baffled political observers in the state, and has also worried religious minority groups.

A week earlier, at a public meeting after visiting Ramatheertham, Naidu alleged that Christian missionaries were indulging in religious conversions at all the temples in the state. He claimed that in one instance, a priest was harassed by 10 persons holding Bibles trying to convert him.

Speaking about this attempt by the TDP to shift its political stance, political analyst K Nageshwar said, “Even BJP has not spoken the language which Chandrababu Naidu is using. It appears that BJP leaders have to take Hindutva lessons from Naidu.”

But this aggressive Hindutva brand of politics by Naidu, projecting himself as the sole saviour of Hindus in the state, will be counterproductive, he observed. According to Nageshwar, the TDP will only help the growth of the BJP with his renewed politics.

“Why will people choose soft Hindutva over hard Hindutva? Before the Parliament elections, Rahul Gandhi tried a similar strategy by visiting temples and projecting himself as a Shiva devotee, but people ultimately elected the Ram devotees (the BJP). Even during the Telangana statehood movement, the TDP and Congress tried to appropriate it, but eventually people voted for the original proponents, the TRS. So, this strategy will only backfire,” Nageshwar said.

Similarly, Palwai Raghavendra Reddy, another political observer, said, “Naidu is making a big mistake with this approach. He seems clueless. This kind of politics will only help the BJP.  Politics in Andhra Pradesh was based on caste equations, but now BJP has introduced religion into it. But before they could build on it, Naidu has taken it away from them. But this will only aid the BJP with their Hindutva narrative.”

“The BJP, which is insignificant in the state, has everything to gain, whereas the TDP stands to lose. They could lose the support of the minorities and other genuine voters,” he added.

Nageshwar noted that Naidu’s fresh strategy could be to give feelers to forge ties with the BJP. “This is futile because the BJP doesn’t ally with any party because of their ideology. They ally only for electoral benefit. Shiv Sena party is a good example of it,” he said.

Critics also said that Naidu’s renewed strategy is to withstand the political force of the BJP, which is growing as a party in neighbouring Telangana with back-to-back success in Dubbaka bye-poll and the Hyderabad municipal elections.

“In Telangana, BJP launched a polarisation campaign attacking the friendly ties between the AIMIM and TRS. The campaign was a success and presently they appear to have sidelined the Congress party. The BJP intends to employ the same polarisation strategy to attack the religious identity of Jagan and emerge as an alternative, but Chandrababu Naidu seems to have sensed it and changed the strategy,” Nageshwar said. #KhabarLive #hydnews