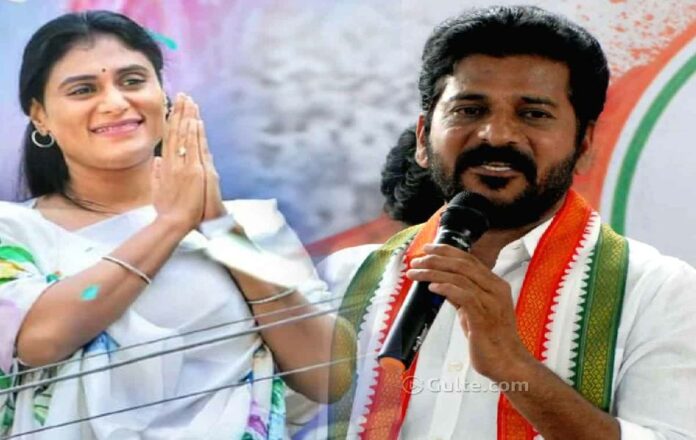 It seems the leadership of Telangana Congress Party is worried to face the new political entry in the state to save the remaining reputation of the party.

As YS Sharmila made it clear that she had political ambitions and that too in Telangana. Her perceived entry into Telangana politics with the slogan of bringing ‘Rajanna Rajyam’ (YSR rule) in the state, was described by the BJP and Congress as an “arrow from KCR’s quiver”. Though the barb is intended to imply that Telangana Chief Minister K Charasekhar Rao was propping up Sharmila to divide the anti-incumbency vote, it also betrays the opposition’s worry that her entry can be detrimental for them.

Referring to Sharmila, Telangana Congress working president Revanth Reddy remarked, “This arrow was not released by Jagan but by KCR (K Chandrasekhar Rao). Since Dalits, Adivasis, Reddys, and other communities are going to reject KCR for the third term, he released this arrow.”

Traditionally, the Congress was a party that accommodated Reddy leaders in the Telugu states, and many of them like Sanjeeva Reddy, Kasu Bramhananda Reddy, Marri Chenna Reddy, Vijaya Bhaskara Reddy, N Janardhana Reddy, YS Rajasekhara Reddy and Kiran Kumar Reddy became Chief Ministers of united Andhra Pradesh. The allegiance of the Reddy community, a dominant and affluent community, lay firmly with the Congress for decades.

However, post bifurcation, the political equation in the state changed, and the power shifted to K Chandrasekhar Rao, who belongs to the Velama community. The Reddy community has been vying to gain back power and as part of this, Revanth Reddy has been mobilising leaders from Reddys and other communities to bring the Congress back in power. Reddy recently held a 10-day padayatra to boost the morale of Congress workers. He also used it as a platform to project himself as the Chief Minister face for the 2023 elections.

“It doesn’t matter who released this arrow, but who gets affected is important. Sharmila’s party has the potential to hurt the Congress party,” says Balaboina Sudarshan, a political observer. “Contrary to the perception created by other parties, the Congress has a strong grassroots cadre, and the majority of them are Reddys who are wealthy and have social capital. If these people are denied power for long, naturally, they will choose Sharmila’s party over the BJP or TRS.”

Some Congress leaders like DK Aruna and Sabitha Indra Reddy who were ministers in the Rajasekhara Reddy cabinet, had joined the BJP and TRS respectively.

Analysts say that other Reddy leaders would prefer Sharmila’s party over the BJP or TRS. Since the BJP largely prioritizes RSS-affiliated leaders with a Hindutva agenda, and Reddy leaders taking over the TRS party is a distant dream, they point out.

K Nageshwar, another political commentator, points to what happened to Komatireddy Rajagopal, the Congress Munugode MLA. “He had publicly announced that he will join the BJP anticipating that the national party will hand over state leadership to him, but they preferred Bandi Sanjay, a leader with RSS roots,” he says.

“The Congress has every reason to be worried with Sharmila’s political entry. Already several leaders who could not survive without power have joined either the BJP or TRS. Rajasekhar Reddy’s supporters from Congress could rally behind her,” says T Lakshminarayana, political analyst. With the BJP appearing to have gained ground in the state following the Dubbaka bye-poll and the Hyderabad municipal elections, the Congress’s position has further diminished.

The launch of Sharmila’s party is imminent as she has conducted several meetings with various people. The groundwork has already resulted in the resignation of state Congress spokesperson Indira Shoban. Two days ago, after being denied a ticket to contest in the upcoming MLC elections, Indira quit the party, and said that she will work with Sharmila.

“A vacuum in the state exists which Sharmila’s party will occupy, to try to eliminate Congress,” says Sudarshan.

The tag of being an ‘Andhra person’, and being the daughter of a former Chief Minister who was against Telangana state formation weighs her down. But Sharmila, who is also the sister of Andhra Pradesh Chief Minister Jagan Mohan Reddy, should not be underestimated, according to Sudarshan.

In response to the criticism of her being an ‘outsider’, Sharmila has said that she was born in Hyderabad. Further, to the question of whether she will genuinely work in the interest of Telangana, Sharmila has resorted to emotional replies, claiming that that she will even fight against her brother Jagan, if a conflict arose between the two states. She has already said that Jagan has not approved of her political ambitions in Telangana.

Though Sharmila has not presented any timeline on when she will launch a party, when it happens, it will create a churn of sorts in Telangana politics. #KhabarLive #hydnews