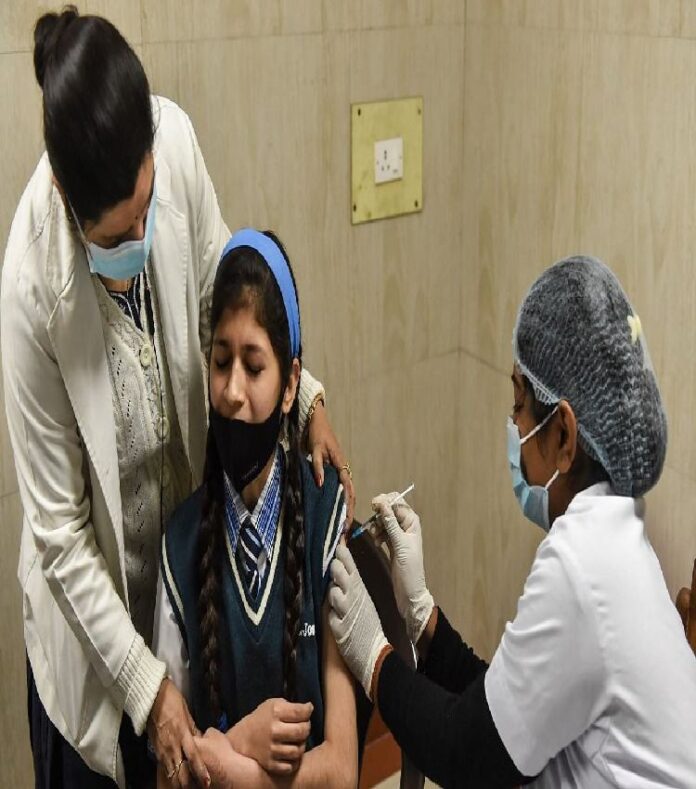 ‍The lack of transparency and data has made parents wary of ‘expired’ vaccine doses in spite of government clarification.

On 3 January, India started offering COVID-19 vaccines to children between the ages of 15 and 18 years. The government had also issued a statement saying that, at the moment, only Bharat Biotech’s Covaxin would be rolled out for kids.

The day, however, was marred by yet another controversy for Covaxin, when several tweets questioning the vaccine’s safety started doing the rounds.

Navanita Varadpande, a resident and vaccine victim attendent, tweeted a picture of a circular announcing the extension of Covaxin’s shelf life, with the words, “So my son went to get his first vaccine, the drive for kids begin today and realized that the vaccine had already expired in November. Then a letter was shown wherein it seems the shelf life has been extended! How, why, on what basis?”

This led to parents and concerned citizens questioning the safety of the vaccines and accusing the government of ‘experimenting on children’.

The Central Government, later in the day, issued a statement clarifying that the Central Drugs Standard Control Organisation (CDSCO) had, in fact, extended the shelf life of both the Covaxin and Covishield COVID-19 vaccines to 12 and 9 months respectively, and that they were safe to use.

According to the statement,

The statement also said that the extension was made by the National Regulator based on “comprehensive analysis and examination of stability study data furnished by the vaccine manufacturers.”

The question then arises, where is this stability study data, and what exactly does it say?

Before we get into Covaxin’s shelf life, and what this means in terms of its safety and efficacy in children, let’s break down how COVID vaccine expiry dates work.

Speaking to #KhabarLive, Dr Swapneil Parikh, Internal medicine specialist, and the author of the book, The Coronavirus: What You Need to Know about the Global Pandemic explains this saying,”typically when a vaccine is first authorized, stability studies have been done for a certain period of time, let’s say six months. That’s part of the process. So when a vaccine is first authorized this may only have been done for about six months or so.”

“As more time passes the duration for which the stability studies have been done increases. So after another 3-4 months they may have a stability study that’s gone on for nine months. And that may show that the vaccine retains its immunogenicity and hasn’t degraded at nine months.” – Dr Swapneil Parikh, Internal medicine specialist

At this point, he goes on to explain, the vaccine’s shelf life may be extended to the timeframe till when it’s stability has been studied.

After the initial Emergency Use Authorisation (EUA) is granted to a vaccine, stability studies may also be conducted in different temperatures or storage conditions that may result in changes in guidelines later on.

Dr Parikh also talks about how “initially when vaccines are released, there may be a certain level of caution taken with the period they allocate for the stability or the shelf life, and it can get extended later.”

These ‘stability studies’ check for the vaccine’s immunogenicity, and according to Dr Parikh, “safety generally would not be impacted.”

Speaking to #KhabarLive, Dr Satyajit Rath adds, “generally, vaccine expiry dates are more to do with loss of efficacy rather than about possibilities of any harm caused. So the issue is much more likely to be about ‘do they still work’, and not about ‘are they dangerous”.

In fact, it isn’t unusual for drugs and, in this case vaccines, approved under EUAs to have their shelf lives extended as stability studies are carried on for longer periods and the vaccine is found to not degrade.

The US Food and Drug Administration (FDA) too extended the expiration of Pfizer BioNTech’s COVID vaccine (frozen viles) from 6 months to 9 months earlier this year, the same was done for their paediatric vaccine.

But, in the case of Covaxin, the issue, according to Dr MJ Hegde, Principal Scientist at GSK is that of a lack of structural communication, and transparency when it comes to critical developments.

In a Twitter thread, Dr Hegde explained how regulatory bodies like the FDA, European Medical Association (EMA) and UK’s Medicines and Healthcare products Regulatory Agency (MHRA) have a standard procedure when it comes to communicating with the public regarding such crucial changes to regulations.

In the case of our vaccines, he argues, official statements should have come from the CDSCO or the DCGI will in advance, instead of the government issuing a statement as a response to outrage.

The incident has sparked renewed doubts in the minds of parents regarding the safety of the vaccines, particularly when it’s the only option available for children.

These are valid doubts, and doubts that can only be dispelled with straightforward transparency, the lack of which Bharat Biotech has been called out for time and again.

“What would be reassuring to allay these fears is if the process by which the extension was given and the studies that have been performed is shared.” – Dr Swapneil Parikh, Internal medicine specialist

While the Central Government’s declaration countering the allegations stated that the decision to extend the shelf life of both Covaxin and Covishield was made after evaluating stability studies, these have not been released for peer review.

In the absence of accessible data, it becomes very difficult to gauge the safety of the vaccine and make an informed choice, say experts.

“If stability studies have been done, then this should be shared so that you know the study has been done and the process by which this extension was given should be shared,” says Dr Parikh.

“But in the absence of such evidence I can’t comment one way or the other, what the process has been and whether this is unsafe.” – Dr Swapneil Parikh, Internal medicine specialist

Unless there is clarity, and scientific evidence to back it, we’ll continue to be in a limbo with more questions than answers regarding vital vaccines, their regulations and their safety and efficacy. #KhabarLive #hydnews