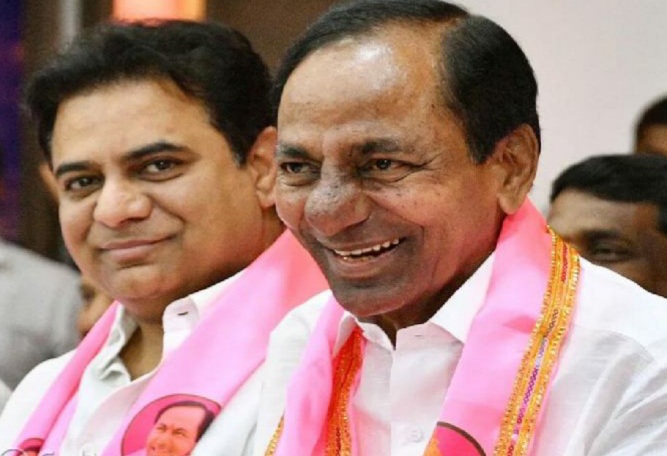 All eyes on KCR to announce as his son KTR as next Chief Minister of Telangana. But KCR is mum over right time to declare as the time is not favorable.

With the Telangana Rashtra Samiti’s plenary fast approaching, the long-standing chorus at various levels in the party for making IT Minister K T Rama Rao, TRS working president and son of Chief Minister K Chandrasekhar Rao, as the Chief Minister seems to have now gained stridency and reached the TRS brass, though KCR himself has been eloquently silent on the crucial matter.

The chorus has now become rather uninhibited after senior TRS leader and Health Minister  Etala Rajender expressed his opinion two days ago affirming the view in party circles that it is time for KCR to hand over the baton to KTR.

Striking while the iron is hot, on Wednesday yet another Minister Talasani Srinivas Yadav and two TRS MLAs, Bajireddy Goverdha and Shakeel Aamir Mohammed, overtly supported the view that “KTR has all the qualities to become CM” and that “the state will achieve further progress if KTR is made CM”.

The buzz in TRS circles is that KCR may hand over reins to his son KTR anytime on ‘health grounds’.  Their ballpark estimate is that the coronation may take place during the TRS plenary, which is held on April 27 every year. TRS leaders and cadre speculate that KCR may make an announcement on making KTR as the next CM during the party’s plenary in April.

Talasani said, “What’s wrong in KTR becoming CM?  KTR is already playing a key role both in the party as well as in the TRS government. KTR is the most efficient and capable leader. He can handle any situation and has the capacity to face any challenges.”

Bodhan TRS MLA Shakeel went a step further, saying that the upcoming Budget session of the Legislative Assembly should be held under the leadership of KTR. He even requested KCR to give a serious thought on making KTR as CM and hoped that KCR would anoint KTR at the earliest. Shakeel went on to say that Telangana State would achieve further progress with KTR as CM.

“KCR should bless KTR to become CM. This is not just my opinion but the opinion of the majority of the young MLAs in TRS,” Shakeel said. Nizamabad Rural TRS MLA Bajireddy Govardhan said that he was among the TRS MLAs who wished KTR should be made CM at the earliest.

“I appeal to KCR to think seriously on this issue. I hope KCR will soon announce KCR as next CM,” Bajireddy said.

ALSO READ:  Dear Modiji, Do You Know Why We, The People Of Andhra Pradesh Loves You?

It may be recalled that Tourism Minister V Srinivas Goud too had previously stated that KTR was capable enough to lead Telangana State as CM and that he should be made the CM at the earliest.

TRS leaders and cadre expect KCR to hand over reins to KTR only in April during the plenary. This is because by that time all the elections, namely Warangal, Khammam municipal corporation polls, MLC polls for two seats and Nagarjunasagar Assembly bypoll would be completed and there will be no more elections left in Telangana until 2023 December Assembly bypolls.

This, party circles feel, would pave the way for KCR to make KTR the Chief Minister and give him time to settle down and strengthen party and prepare it to face the Assembly polls and retain power for third time in a row. #KhabarLive #hydnews