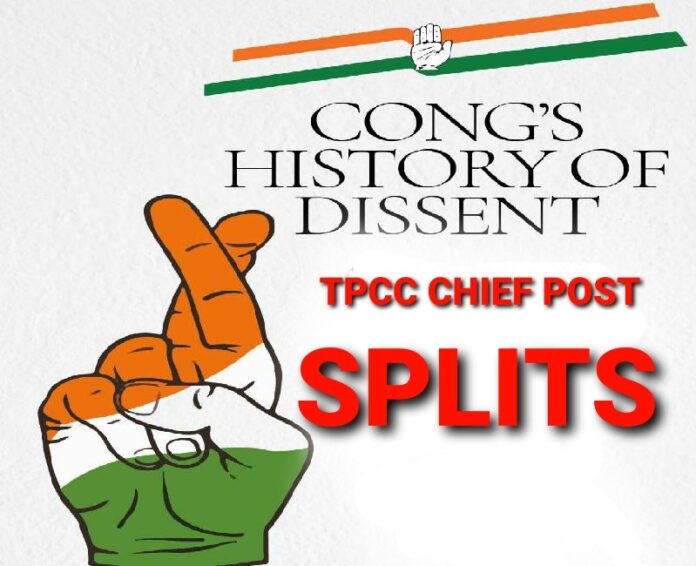 It’s a regular affair in Telangana Congress Party to split on any issue and crops the differences which effect on cadre and elections, turned the fate as disaster!

The Telangana Congress is caught in a vortex, spinning out of control and beset with infighting. While the list of problems plaguing the party is endless, the latest is the ‘social war’ over the successor to Uttam Kumar Reddy as the next Telangana Pradesh Congress Committee (TPCC) president.

Pitted on either side are leaders from the Reddy and BC communities.

These leaders, from both the communities, are hopping on the first available flight to Delhi to meet the party high command and making their pitch for the post. This is despite the high command making it clear that a decision on the TPCC chief post would be taken only after the Nagarjunasagar Assembly by-election.

ALSO READ:  Why Unmarried Women Are Often Refused A 'Trans-Vaginal Sonogram' For Their 'Polycystic Ovary Syndrome'?

From the Reddy community, MPs Komatireddy Venkat Reddy and A Revanth Reddy are strong contenders. They are facing stiff resistance from BC leaders, who say that appointing a Reddy to the post would be like “old wine in a new bottle”.

Their argument is that till the recent Assembly elections, the top two posts in the party – TPCC president and Congress Legislature Party (CLP) leader posts were held by Reddys.

Apart from these two posts, Revanth Reddy was made the TPCC working president.

BC leaders who have some clout in the party are exerting pressure on the high command to appoint a BC as TPCC president this time.

He is believed to have told the former Congress president that there is a feeling among the people that Congress is giving preference to only one community (Reddys) and spoke of the need to take all communities along.

Speaking to this newspaper, Madhu Yashki said that he discussed Karnataka politics and TPCC issues with Rahul Gandhi. However, he refused to divulge details.

Incidentally, the Congress high command had, both in undivided AP and after bifurcation, appointed BC leaders like V Hanumanth Rao, K Keshav Rao, D Srinivas, Botsa Satyanarayana, Ponnala Laksmaiah and others as PCC president.

Coincidentally, all these leaders belong to one caste – Munnuru Kapu. Now BC leaders want a leader from some other caste among the BCs as TPCC president.

Madhu Yashki is a Goud, considered a dominant community in the state. One section in the Congress feels that Madhu Yashki stands a fair chance if the high command indeed decides to appoint a BC leader as next TPCC president. #KhabarLive #hydnews